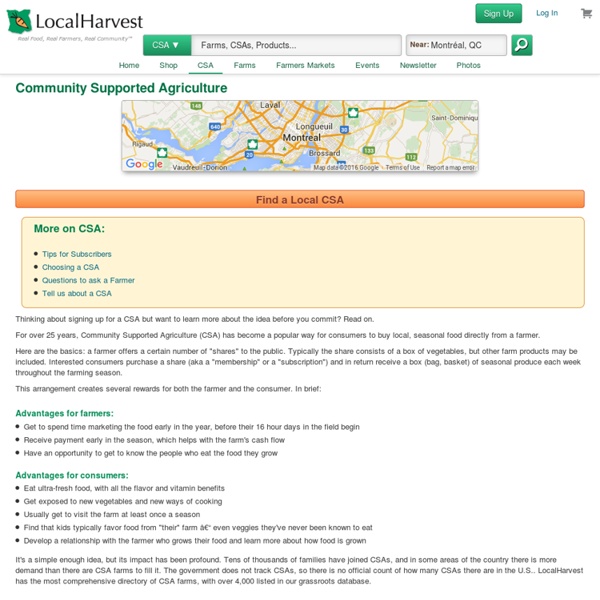 Thinking about signing up for a CSA but want to learn more about the idea before you commit? Read on. For over 25 years, Community Supported Agriculture (CSA) has become a popular way for consumers to buy local, seasonal food directly from a farmer. Here are the basics: a farmer offers a certain number of "shares" to the public. Typically the share consists of a box of vegetables, but other farm products may be included. Interested consumers purchase a share (aka a "membership" or a "subscription") and in return receive a box (bag, basket) of seasonal produce each week throughout the farming season. This arrangement creates several rewards for both the farmer and the consumer. Advantages for farmers: Get to spend time marketing the food early in the year, before their 16 hour days in the field begin Receive payment early in the season, which helps with the farm's cash flow Have an opportunity to get to know the people who eat the food they grow Advantages for consumers: Variations Shared Risk

McDonald’s Goes Vegetarian in India While McDonald’s may be known for its Big Mac containing two “all-beef patties” in its nearly 33,000 worldwide restaurants, a pair of forthcoming restaurants near religious centers in India will go completely meatless — the first all-vegetarian restaurants in the chain’s 57-year history. (MORE: McDonald’s Wedding Packages Have Hong Kong Lovin’ It) The first meatless McDonald’s is expected to debut in 2013 in northern India, according to the AFP, near the famous Golden Temple in Amritsar, an important Sikh center of worship. The second will open soon afterwards at the Vaishno Devi cave shrine, a popular Hindu attraction in India-controlled Kashmir. McDonald’s has a long history of tailoring menu items to local tastes — witness its bid to offer baguettes in France — and South Asia is no different.

Lilypad floating city concept The Lilypad floating city concept is designed to house climate change refugees Image Gallery (10 images) With global sea levels predicted to rise significantly over the next century due to climate change, a lot of people living in low lying areas are expected to be displaced from their homes. Architect Vincent Callebaut has come up with a possible relocation destination for these climate change refugees in the form of the “Lilypad” concept – a completely self-sufficient floating city that would accommodate up to 50,000. View all Waste = Food Man is the only creature that produces landfills. Natural resources are being depleted on a rapid scale while production and consumption are rising in na­tions like China and India. The waste production world wide is enormous and if we do not do anything we will soon have turned all our resources into one big messy landfill. But there is hope. The German chemist, Michael Braungart, and the American designer-architect William McDonough are fundamentally changing the way we produce and build. If waste would become food for the biosphere or the technosphere (all the technical products we make), produc­tion and consumption could become beneficial for the planet.

6 Easy Ways To Get A Jump On Next Year’s Garden Fall is a wonderful time to look back at your summer garden and evaluate what worked and what didn’t. Reviewing your gardening success from season to season is one of the best ways to design your gardens for next year and beyond. We learn by doing, and you’ve just finished up an entire season of in-the-trenches, hands-on gardening experience. So, whether your gardening experience this past year was good or great, bad or ugly … there’s always something you can learn from it. We gardeners have a slogan we abide by: There’s always next year. Garden Successes … and Failures Community-supported agriculture Community-supported agriculture (CSA; sometimes known as community-shared agriculture) is an alternative, locally-based economic model of agriculture and food distribution. A CSA also refers to a particular network or association of individuals who have pledged to support one or more local farms, with growers and consumers sharing the risks and benefits of food production. CSA members or subscribers pay at the onset of the growing season for a share of the anticipated harvest; once harvesting begins, they receive weekly shares of vegetables and fruit, in a vegetable box scheme.

globalization - National Geographic Society Globalization is the connection of different parts of the world. Globalization results in the expansion of international cultural, economic, and political activities. As people, ideas, knowledge, and goods move more easily around the globe, the experiences of people around the world become more similar. Globalization in History

Obama Ayers Axelrod Exelon ties « Romanticpoet's Weblog Who would have thought prisoners would be used instead of out-of-work Americans for producing solar panels? June 20, 2012 Federal Prison Industries, most commonly known by the trade name UNICOR, is a wholly owned subsidiary of the U.S. Department of Justice. Aquaponics 4 You - Step-By-Step How To Build Your Own Aquaponics System “Break-Through Organic Gardening Secret Grows You Up To 10 Times The Plants, In Half The Time, With Healthier Plants, While the "Fish" Do All the Work...” Imagine a Garden Where There's No More Weeds or Soil Pests, No Tilling or Cultivating, No Fertilizer Spreading or Compost Shredding, No Manure Spreading or Irrigating, and No Tractor Shed Required... And Yet... Your Plants Grow Abundantly, Taste Amazing, and Are Extremely Healthy. Here's How It Works: