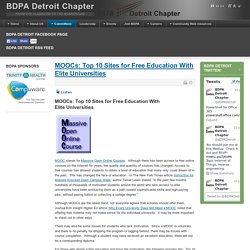 Although there has been access to free online courses on the Internet for years, the quality and quantity of courses has changed. Access to free courses has allowed students to obtain a level of education that many only could dream of in the past. This has changed the face of education. In The New York Times article Instruction for Masses Knocked Down Campus Walls, author Tamar Lewin stated, “in the past few months hundreds of thousands of motivated students around the world who lack access to elite universities have been embracing them as a path toward sophisticated skills and high-paying jobs, without paying tuition or collecting a college degree.”

Although MOOCs are the latest trend, not everyone agrees that schools should offer them. There may also be some issues for students who lack motivation. For those who desire a free education and have the motivation, the following includes the: Top 10 Sites for Information about MOOCs: Srishti Institute of Art, Design and Technology. Geetha Narayanan's journey from starting up with INR 1000 to becoming an education visionary. Geetha Narayanan started her career as a school teacher in 1971 and formed Ujwal Trust with 5 other women and INR 1000 in 1982, with which she a started the Mallya Aditi International School and later on in 1996 founded Srishti School of Art, Design and Technology. 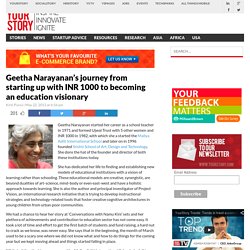 She dons the hat of the founder and director of both these institutions today. She has dedicated her life to finding and establishing new models of educational institutions with a vision of learning rather than schooling. CS50: Introduction to Computer Science. This is CS50x, Harvard University's introduction to the intellectual enterprises of computer science and the art of programming for majors and non-majors alike, with or without prior programming experience. 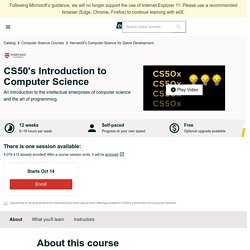 An entry-level course taught by David J. Malan, CS50x teaches students how to think algorithmically and solve problems efficiently. Topics include abstraction, algorithms, data structures, encapsulation, resource management, security, software engineering, and web development. Languages include C, PHP, and JavaScript plus SQL, CSS, and HTML. Problem sets inspired by real-world domains of biology, cryptography, finance, forensics, and gaming. Students who earn a satisfactory score on 9 problem sets (i.e., programming assignments) and a final project will receive a certificate from HarvardX. HarvardX requires individuals who enroll in its courses on edX to abide by the terms of the edX honor code. HarvardX pursues the science of learning. Justin Reich. Change.org · La plateforme mondiale pour le changement. Geetha Narayanan. Out Of Eden Learn. What People in 1899 Thought the Year 2000 Would Look Like. 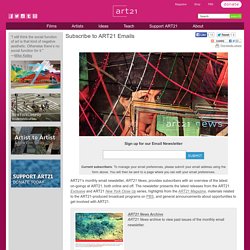 You will then be sent to a page where you can edit your email preferences. ART21's monthly email newsletter, ART21 News, provides subscribers with an overview of the latest on-goings at ART21, both online and off. The newsletter presents the latest releases from the ART21 Exclusive and ART21 New York Close Up series, highlights from the ART21 Magazine, materials related to the ART21-produced broadcast programs on PBS, and general announcements about opportunities to get involved with ART21. ART21. Framework for 21st Century Learning. P21's Framework for 21st Century Learning was developed with input from teachers, education experts, and business leaders to define and illustrate the skills and knowledge students need to succeed in work, life and citizenship, as well as the support systems necessary for 21st century learning outcomes. It has been used by thousands of educators and hundreds of schools in the U.S. and abroad to put 21st century skills at the center of learning.

The P21 Framework represents both 21st century student outcomes (as represented by the arches of the rainbow) and support systems (as represented by the pools at the bottom). Tweet the Framework While the graphic represents each element distinctly for descriptive purposes, P21 views all the components as fully interconnected in the process of 21st century teaching and learning. 21st Century Student Outcomes 1. Mastery of fundamental subjects and 21st century themes is essential for students in the 21st century. 2. 3. 4. 21st Century Support Systems. Staff. Susan Sollins, Executive Director (In Memoriam) Eve-Laure Moros Ortega, Interim Co-Executive Director/Managing Director Diane Vivona, Interim Co-Executive Director/Director of Development Ian Forster, Producer Joe Fusaro, Senior Education Advisor Jessica Hamlin, Director of Educational Initiatives Wesley Miller, Associate Curator Jonathan Munar, Director of Digital Media and Strategy Bruno Nouril, Development Associate, Institutional and Individual Giving Nick Ravich, Director of Production Susan Sollins Executive Director (In Memoriam) Susan Sollins, Executive Producer and Curator of ART21 Art in the Twenty-First Century, has been well known in the field of contemporary art for more than 30 years for her innovations in public programming and museum education, and as a curator. 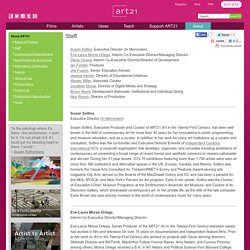