The Age Of Relevance 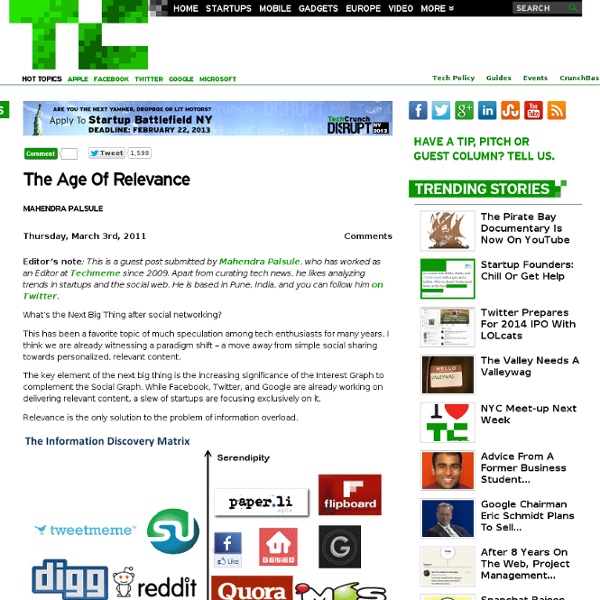 Editor’s note: This is a guest post submitted by Mahendra Palsule, who has worked as an Editor at Techmeme since 2009. Apart from curating tech news, he likes analyzing trends in startups and the social web. He is based in Pune, India, and you can follow him on Twitter. What’s the Next Big Thing after social networking? This has been a favorite topic of much speculation among tech enthusiasts for many years. I think we are already witnessing a paradigm shift – a move away from simple social sharing towards personalized, relevant content. The key element of the next big thing is the increasing significance of the Interest Graph to complement the Social Graph. Relevance is the only solution to the problem of information overload. The above matrix is a representation of how the process of online information discovery has evolved over time. Phase I: The Search Dominated Web Phase II: Web 2.0 With Social Bookmarking Phase III: Personalized Recommendations Phase IV: Personalized Serendipity

Dawn of a New Day « Ray Ozzie To: Executive Staff and direct reports Date: October 28, 2010 From: Ray Ozzie Subject: Dawn of a New Day Five years ago, having only recently arrived at the company, I wrote The Internet Services Disruption in order to kick off a major change management process across the company. In the opening section of that memo, I noted that about every five years our industry experiences what appears to be an inflection point that results in great turbulence and change. Social media and the art of being interested Are you one of those people who has a hard time remembering names when you meet someone new? I was, too – and then I learned what the problem was: I’m a jerk. It turns out that how well you can remember names has nothing to do with your brain or memory and everything to do with whether or not you’re actually interested in that person. “Some people, perhaps those who are more socially aware, are just more interested in people, more interested in relationships,” says Kansas State University professor of psychology Richard Harris. “They would be more motivated to remember somebody’s name.” And most of us, let’s face it, aren’t that interested in the people around us.

The Future of the Internet Advertisement “In only a few short years, electronic computing systems have been invented and improved at a tremendous rate. But computers did not ‘just grow.’ They have evolved… They were born and they are being improved as a consequence of man’s ingenuity, his imagination… and his mathematics.” — 1958 IBM brochure The Internet is a medium that is evolving at breakneck speed. You Might Already Be A Curator... Posted by Tom Foremski - March 10, 2011 Curation is a hot topic in regard to the Internet but curation is nothing new -- most of us do it without even thinking about it. Take a look around your home and you will likely see many curations: - Your book shelf is probably a curated collection of your favorite books -- you got rid of the ones you didn't like.

Google Reveals its Wildest Invention Ever - 'Project Glass' What do you get when you combine wearable glasses with Augmented reality? You get an amazing piece of technology by Google! Google has revealed ‘Project Glass’, its latest initiative for developing a wearable display glasses based on Augmented Reality. It is almost similar to what we’ve been seeing in movies for years, like Robocop. Augmented what? Augmented Reality is a technology that combines the physical real-world environment with interactive digital data providing you with information.

Manifesto For The Content Curator: The Next Big Social Media Job Of The Future ? Every hour thousands of new videos are uploaded online. Blog posts are written and published. Millions of tweets and other short messages are shared. To say there is a flood of content being created online now seems like a serious understatement. Until now, the interesting thing is that there are relatively few technologies or tools that have been adopted in a widespread way to manage this deluge. 5 Computer Science Awards That Show Us The Future Of Technology They are not the Oscars or the Grammy’s. Heck, they aren’t even the Webbies or the Appy Awards for the man on the street. But just like the relatively obscure names you might have encountered in the list of 10 Famous Geeks Who Changed The World, the computer science awards on this list are doing their own quiet bit to promote innovation and invention. In turn, the innovations and inventions are changing our future. We don’t realize it just yet. Of course, it can be argued that awards and honors always come after the event.

New spray-on batteries could revolutionize energy storage By Dakota Torres on 07/02/2012 Renewable energy has been one of the most researched topics ever since gas and oil prices have begun to rise and people have paid attention to their effects on the environment. Making your home run on renewable energy can be quite challenging and in some instances (very) expensive, but a research team at Rice University has just discovered a way to make it a lot easier to create energy and even store it.

Micro Persuasion: The Digital Curator in Your Future The Clip Report: An eBook on the Future of Media In the early 1990s when I began my career in PR there were clip reports. These were physical books that contained press clips. It seems downright archaic now but that’s how I learned about the press - by cutting, pasting up and photocopying clippings. My fascination with the media never abated. Today my role is to form insights into how the entire overlapped media landscape - the pros, social channels, and corporate content - is rapidly evolving and to help Edelman clients turn these learnings into actionable strategies. Dundee University invents Dr Who Sonic Screwdriver Those of you who follow the good doctor’s adventures on the TV (Dr Who, who else? Pardon the pun though) will most probably wished to have the Sonic Screwdriver at one time or another, and perhaps truth is stranger than fiction as researchers over at Dundee University have managed to come up with a real life version which would make for a very passable Dr Who Sonic Screwdriver. This particular device will rely on ultrasound to lift and rotate a rubber disc that floats in a cylinder of water, and marks the first time (according to the University) that ultrasound waves have been used to turn objects instead of just pushing them. This particular technique would help make surgery more precise, being able to treat a range of conditions in a patient without carving him or her open.

How Nvidia’s Kepler chips could end PCs and tablets as we know them Last week, Nvidia launched the first graphics processing unit (GPU) designed for the cloud, dubbed Kepler. Supporting vendors include a who’s who of server providers, such as HP, Dell, Cisco, and IBM — all of which will have products on the market shortly. The whole concept behind these servers is to serve up a desktop experience from the cloud. Apple Helmet Jumps In Augmented-Reality Race Thanks to Moe Howard of the "Three Stooges," it used to be that sporting a bowl cut was quickest way to fashion yourself a helmet-headed moron. Lloyd Christmas, anyone? But now, thanks to Justin Bieber's old do, an even shaggier version of the bowl cut has swept across the nation and Goofus has now become Gallant.