How to Build a Computer from Scratch, Lesson 1: Hardware Basics 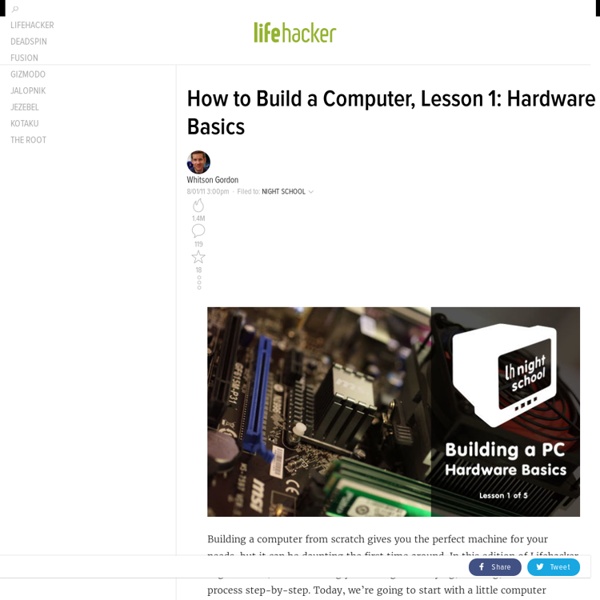 WineHQ - Run Windows applications on Linux, BSD, Solaris and Mac OS X How to Build a Computer from Scratch, Lesson 4: Installing Your Operating System Ah, good eye! So, generally, your motherboard runs all RAM at the lowest speed (correct me if I'm wrong on any nuance of that particular fact, guys). As I mentioned in part 2, RAM speeds don't really matter. You're not going to get any noticeable difference from 300MHz in your RAM. However, where those RAM speeds DO come in useful is if you overclock your processor. Many of today's processors are tightly linked with the RAM, meaning that if you raise the clock speed of your processor, you also raise the clock speed of your RAM. So in the end? RAM speed do provide performance increase, visible in memory intensive task, such as photo editing, CAD or gaming. Your problem is easy to solve. Hope this helps. :) (please keep posted) I had this problem with my new build I bought some 1600 ram but it was running at 1333 on auto. Also, if I recall correctly, there are dividers associated with the bus speed and memory speed so it's still possible to overclock the CPU and keep the RAM in spec.

What Kind of Maintenance Do I Need to Do on My Windows PC? Dear Lifehacker, You guys recently talked about Mac Maintenance, but I'm frankly still a little lost when it comes to Windows. Should I be defragging, cleaning my registry, and running programs like CCleaner? What do I actually need to do to maintain my Windows PC? Sincerely, Wringing Out WindowsP Dear Wringing, You're right, people talk a lot about ways to "speed up Windows" or keep your system well-maintained, but Windows has evolved a lot, and some of those are outdated. Maintenance You'll Want to DoP Update Windows: We've said it before, and we'll say it again: Don't neglect Windows Update. Run Antivirus Software: It's a sad fact of life, but if you're using Windows, you'll probably want some form of antivirus software running in the background. Back Up Your Hard Drive: Whether it's the simple Windows Backup or an automated, offsite backup tool like our favorite Crashplan, backups are essential tools for any PC user. Maintance You Don't Need to DoP SExpand Sincerely, LifehackerP P.S.

Ubuntu (operating system) Development of Ubuntu is led by Canonical Ltd.,[11] a company based on the Isle of Man and owned by South African entrepreneur Mark Shuttleworth. Canonical generates revenue through the sale of technical support and other services related to Ubuntu.[12][13] The Ubuntu project is publicly committed to the principles of open source development; people are encouraged to use free software, study how it works, improve upon it, and distribute it.[14][15] GNOME (the former default desktop) supports more than 46 languages.[17] For increased security, the sudo tool is used to assign temporary privileges for performing administrative tasks, allowing the root account to remain locked, and preventing inexperienced users from inadvertently making catastrophic system changes or opening security holes.[18] PolicyKit is also being widely implemented into the desktop to further harden the system through the principle of least privilege. Ubuntu is currently funded by Canonical Ltd.

The Best PCs You Can Build for $600 and $1200 Set Up and Get to Know Your New Windows PC What's your guys thoughts on simply reinstalling the Windows OS as soon as you get your new computer? It seems like when I install my OS it doesn't have all that bloatware and feels much more fresher than the day I first used it. Also, since Windows 7 installing the OS is pretty fast and you don't even have to worry about most of your drivers as Windows handles it for you. Just wondering if it'd be easier to boot up the computer once, then reinstall the OS for a truly fresh and new computer rather than dealing with uninstalling a bunch of bloatware and etc. Flagged @Manly McBeeferton: I almost always do this, but it's just not practical for most people, so I went with the "use Revo Uninstaller" advice instead. @Whitson Gordon: No need to plop down money. @MaxellDVD1: But I was under the impression that'll only work with the copy that comes with your computer; not with a clean copy of Windows. OEM keys are split into three types: -SLP (system locked preinstallation).

Wine (software) Wine is a free and open source software application that aims to allow applications designed for Microsoft Windows to run on Unix-like operating systems. Wine also provides a software library, known as Winelib, against which developers can compile Windows applications to help port them to Unix-like systems.[3] The name Wine initially was an acronym for windows emulator.[7] Its meaning later shifted to the recursive backronym, wine is not an emulator in order to differentiate the software from CPU emulators.[8] While the name sometimes appears in the forms WINE and wine, the project developers have agreed to standardize on the form Wine.[9] The phrase "wine is not an emulator" is a reference to the fact that no processor code execution emulation occurs when running a Windows application under Wine. Wine officially entered beta with version 0.9 on 25 October 2005.[18] Version 1.0 was released on 17 June 2008,[19] after 15 years of development. Software that runs flawlessly ("Platinum")