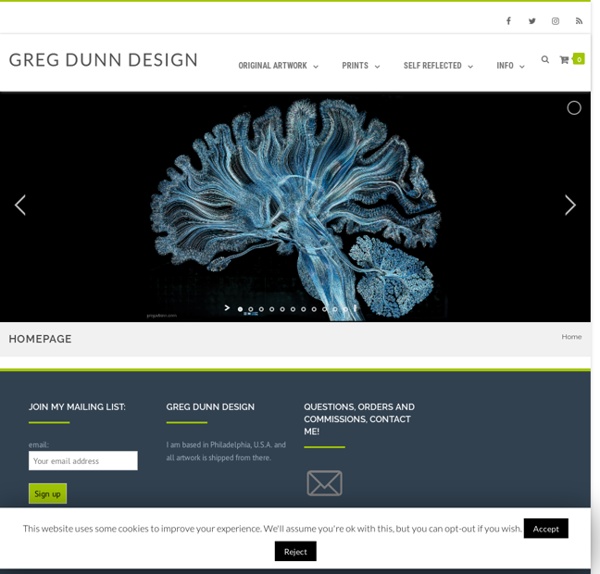 The Steely Dan Interview: Paul Cashmere Talks To Donald Fagen 1n 1972, Walter Becker and Donald Fagen, a couple of college friends who had been playing around in various bands, decided to form their own group. The name they chose was Steely Dan. It was a joke name. It came from the term for a dildo in the William Burroughs book 'Naked Lunch'. Becker and Fagen thought it was funny. Patiently Arranged Dandelion Works by Botanical Artist Duy Anh Nhan Duc All images via Duy Anh Nhan Duc Self-taught botanical artist Duy Anh Nhan Duc uses a steady hand to arrange dandelion blossoms in artful imitations of their flight through the air. His monochrome works are each reminiscent of a universal childhood urge to scatter a dandelion’s seedlings with a single blow, eager to watch the feathery pieces take flight in the wind.

Jaroslav Panuska Expressive Head, 1900 Spirit of the Dead Mother, 1900 Death Looking into the Window of One Dying, 1900 Vampires Cover for "Boží bojovníci" by Josef Svatopluk Machar, 1931. Illustrations from the book can be found here. Greg Dunn Design Ink on watercolor paper 18″ X 24″ 2015 Framed in custom selected moulding with antireflective and UV protective art glass. The retina converts light hitting the eye into neural signals that can be interpreted by higher order brain structures in the cortex. Light hits the photoreceptors (top of the painting) and the consequent signals transmitted through the retina are organized into packets of semiprocessed information that conveys the basic color and edge structure of an image.

Mind-Bending Body Painting Work by Craig Tracy by ibby Tue, 07/17/2012 - 03:11 Craig Tracy, a New Orleans native, has been a professional artist since the age of sixteen. Never satisfied with conventional contemporary art, Craig was always searching for a form of expression that would amplify his unique creative perspective eventually leading him to take his expertise in bodypainting into the realm of fine art.

Understanding Camera Lenses Understanding camera lenses can help add more creative control to digital photography. Choosing the right lens for the task can become a complex trade-off between cost, size, weight, lens speed and image quality. This tutorial aims to improve understanding by providing an introductory overview of concepts relating to image quality, focal length, perspective, prime vs. zoom lenses and aperture or f-number. Framework for 21st Century Learning P21's Framework for 21st Century Learning was developed with input from teachers, education experts, and business leaders to define and illustrate the skills and knowledge students need to succeed in work, life and citizenship, as well as the support systems necessary for 21st century learning outcomes. It has been used by thousands of educators and hundreds of schools in the U.S. and abroad to put 21st century skills at the center of learning. The P21 Framework represents both 21st century student outcomes (as represented by the arches of the rainbow) and support systems (as represented by the pools at the bottom). Tweet the Framework

Alfred Kubin I encourage everyone to seek out Alfred's strange novel, The Other Side. The following is a detailed summary of the fantastical novel. "The Other Side tells the story of a German artist who is visited one day by a mysterious stranger claiming to be an emissary of old school friend named Patera. Furthermore the stranger states that this Patera is now the richest man in the world and has been building an idyllic community on a large piece of land he has purchased specifically for the purpose - this community goes under the name of the Dream Kingdom and has a capital city, Perle. Vincent Van Gogh News Highlights from the Archives The Evolution of a Master Who Dreamed on Paper By MICHAEL KIMMELMAN You can still picture van Gogh, bookish and fastidious, pouring out his thousands of letters and drawings, private diaries in words and images, sent to his brother and to a few trusted friends, providing him with a stability that he evidently could find nowhere else in life. The Protestant preacher's son, he dutifully recorded his constant labors with pen and paper.

5 DAY CREATIVE TEXTILE COURSE: FLAX PROCESSING, SPINNING, WEAVING AND NATURAL DYING « Selvedge Join textile artist Susie Gillespie and learn how to process, spin, weave and naturally dye linen. Susie will pick your flax from her orchard in August (2016) so it has time to dry. But don’t worry, she’ll talk you through the process of planting the seeds, rippling and retting the stems so they are ready to be spun. You’ll start by making preparations to the flax stems to prepare them for spinning, this will include revealing the flax fibres, removing the pith, combing them and finally winding them so you can tease off the fibre to produce the yarn. Once you have a hank of your own linen you can experiment with a range of natural dyes or keep the linen in its natural state. Subscribe to ART21 Emails Current subscribers: To manage your email preferences, please submit your email address using the form above. You will then be sent to a page where you can edit your email preferences. ART21's monthly email newsletter, ART21 News, provides subscribers with an overview of the latest on-goings at ART21, both online and off. The newsletter presents the latest releases from the ART21 Exclusive and ART21 New York Close Up series, highlights from the ART21 Magazine, materials related to the ART21-produced broadcast programs on PBS, and general announcements about opportunities to get involved with ART21.

Photography: Soulcatcher Studio: Karl Blossfeldt: Urformen der Kunst: Photogravures: Exhibition & Sale Karl Blossfeldt (1865-1932) was a German instructor of sculpture who used his remarkable photographs of plant studies to educate his students about design elements in nature. Self-taught in photography, he devoted himself to the study of nature, photographing nothing but flowers, buds and seed capsules for thirty-five years. He once said, "The plant never lapses into mere arid functionalism; it fashions and shapes according to logic and suitability, and with its primeval force compels everything to attain the highest artistic form." Lots of Naked People Altucher Confidential Posted by James Altucher Tamara gave me a naked picture of herself. “It’s a gift,” she said. Our yoga instructor, a pretty blonde girl, was also in the picture. Naked. To be fair they were surrounded by about thirty other naked people.