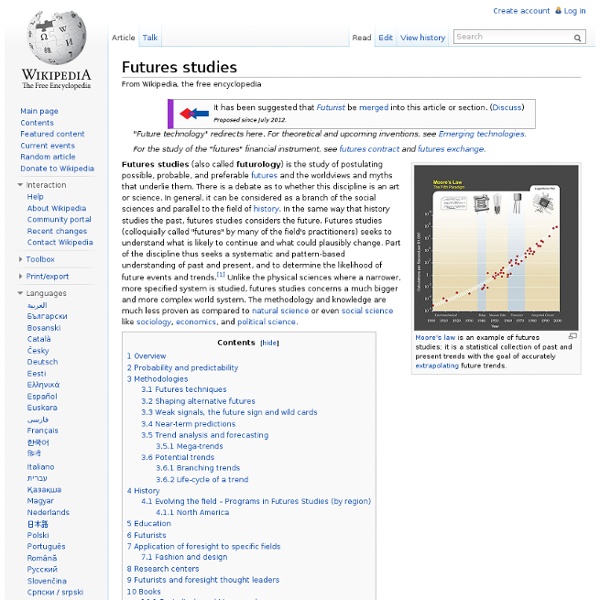 Moore's law is an example of futures studies; it is a statistical collection of past and present trends with the goal of accurately extrapolating future trends. Futures studies (also called futurology and futurism) is the study of postulating possible, probable, and preferable futures and the worldviews and myths that underlie them. There is a debate as to whether this discipline is an art or science. In general, it can be considered as a branch of the social sciences and parallel to the field of history. In the same way that history studies the past, futures studies considers the future. Futures studies (colloquially called "futures" by many of the field's practitioners) seeks to understand what is likely to continue and what could plausibly change. Overview[edit] Futures studies is an interdisciplinary field, studying yesterday's and today's changes, and aggregating and analyzing both lay and professional strategies and opinions with respect to tomorrow. Methodologies[edit]

Futures techniques Futures techniques used in the multi-disciplinary field of futures studies by futurists in Americas and Australasia, and futurology by futurologists in EU, include a diverse range of forecasting methods, including anticipatory thinking, backcasting, simulation, and visioning. Some of the anticipatory methods include, the delphi method, causal layered analysis, environmental scanning, morphological analysis, and scenario planning. Anticipatory thinking protocols[edit] Delphi method[edit] The Delphi method is a very popular technique used in Futures Studies.

Singularity University Singularity University is an unaccredited university[2] located in Silicon Valley whose stated aim is to "educate, inspire and empower leaders to apply exponential technologies to address humanity’s grand challenges."[3] It was founded in the summer of 2008 by Peter Diamandis and Ray Kurzweil in Moffett Field, CA.[3] Singularity University's programs range from an annual ten-week summer course intended for graduate and post-graduate students to seven-day programs for senior corporate executives and senior government leaders. Other programs include Singularity University Labs, global outreach, and conferences.

About the Millennium Project Purpose: Improve humanity's prospects for building a better future. Mission: Improve thinking about the future and make that thinking available through a variety of media for feedback to accumulate wisdom about the future for better decisions today. Vision: A global foresight network of Nodes, information, and software, building a global collective intelligence system recognized for its ability to improve prospects for humanity. A think tank on behalf of humanity, not on behalf of a government, or an issue, or an ideology, but on behalf of building a better future for all of us.

Transhumanism Transhumanism (abbreviated as H+ or h+) is an international cultural and intellectual movement with an eventual goal of fundamentally transforming the human condition by developing and making widely available technologies to greatly enhance human intellectual, physical, and psychological capacities.[1] Transhumanist thinkers study the potential benefits and dangers of emerging technologies that could overcome fundamental human limitations, as well as the ethics of developing and using such technologies. They speculate that human beings may eventually be able to transform themselves into beings with such greatly expanded abilities as to merit the label "posthuman".[1] History[edit]

Nanotechnology Nanotechnology ("nanotech") is the manipulation of matter on an atomic, molecular, and supramolecular scale. The earliest, widespread description of nanotechnology[1][2] referred to the particular technological goal of precisely manipulating atoms and molecules for fabrication of macroscale products, also now referred to as molecular nanotechnology. A more generalized description of nanotechnology was subsequently established by the National Nanotechnology Initiative, which defines nanotechnology as the manipulation of matter with at least one dimension sized from 1 to 100 nanometers. This definition reflects the fact that quantum mechanical effects are important at this quantum-realm scale, and so the definition shifted from a particular technological goal to a research category inclusive of all types of research and technologies that deal with the special properties of matter that occur below the given size threshold.