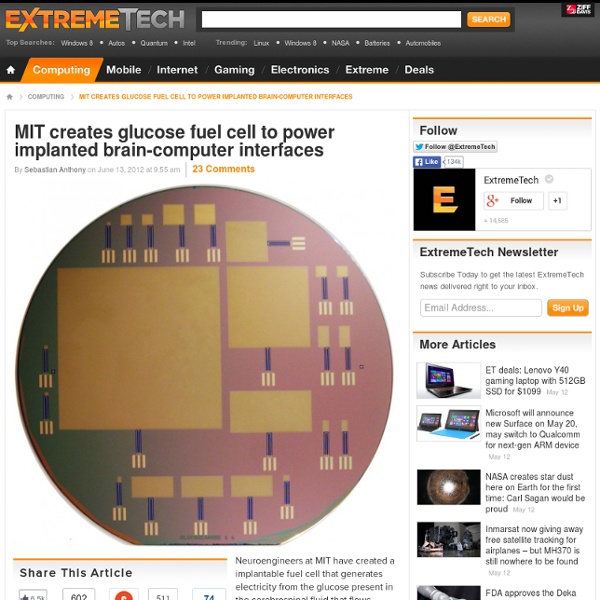 Neuroengineers at MIT have created a implantable fuel cell that generates electricity from the glucose present in the cerebrospinal fluid that flows around your brain and spinal cord. In theory, this fuel cell could eventually drive low-power sensors and computers that decode your brain activity to interface with prosthetic limbs. The glucose-powered fuel cell is crafted out of silicon and platinum, using standard semiconductor fabrication processes. Size-wise, the MIT engineers have created glucose-powered fuel cells that are as large as 64x64mm (2.5in), or as small as just a few millimeters. This discovery is exciting for two main reasons: a) The fuel cell is completely synthetic, and b) they can be produced using low-tech, decades-old chip fabrication processes. Ultimately, this fuel cell will hopefully be used to power implanted, ultra-low-power devices that sit inside your skull or spinal cord. Read more at MIT or download the paper at PLoS ONE (non-paywalled!)

Damn Interesting • A collection of legitimately fascinating information culled from the past, present, and anticipated future. 14 Stories That Prove Animals Have Souls 25 Things You Might Not Know About Futurama The Rumpus.net 25 Beautifully Illustrated Thought-Provoking Questions 405 Flares Facebook 137 Twitter 5 Google+ 194 StumbleUpon 1 Pin It Share 68 68 405 Flares × A question that makes you think is worth asking… At the cusp of a new day, week, month, or year, most of us take a little time to reflect on our lives by looking back over the past and ahead into the future. We ponder the successes, failures and standout events that are slowly scripting our life’s story. This process of self reflection helps us maintain a conscious awareness of where we’ve been and where we intend to go. It is pertinent to the organization and preservation of our dreams, goals and desires. Remember, these questions have no right or wrong answers. Here’s a sample of 25 recent thought questions posted on the site: Few extra questions Thank you for visiting, we hope you find our site, enjoyable, informative and educational.

Seeing in the Dark & SEEDMAGAZINE.COM Credit: cliff1066tm. Patient TN was, by his own account, completely blind. Two consecutive strokes had destroyed the visual cortex of his brain, and consequently, his ability to see. It is not uncommon for stroke patients to suffer brain damage, but the case of TN — referenced by his initials, the general practice in such studies — was peculiar. Known as selective bilateral occipital damage, TN’s unusual injury made him the subject of much interest while recovering at a hospital in Geneva. To further test the extent of TN’s abilities, researchers from Tilburg University in the Netherlands devised a simple yet decisive experiment: an obstacle course. TN’s rare condition is known as blindsight. The researchers explained that TN’s success indicates that “humans can sustain sophisticated visuo-spacial skills in the absence of perceptual awareness.”

- StumbleUpon WHY DID THE CHICKEN CROSS THE ROAD? Plato: For the greater good. Karl Marx: It was a historical inevitability. Brain Scanner Records Dreams on Video Just a few weeks ago, we posted about how brain patterns can reveal almost exactly what you're thinking. Now, researchers at UC Berkeley have figured out how to extract what you're picturing inside your head, and they can play it back on video. The way this works is very similar to the mind-reading technique that we covered earlier this month. A functional MRI (fMRI) machine watches the patterns that appear in people's brains as they watch a movie, and then correlates those patterns with the image on the screen. With these data, a complex computer model was created to predict the relationships between a given brain pattern and a given image, and a huge database was created that matched 18,000,000 seconds worth of random YouTube videos to possible brain patterns. Comparing the brain-scan video to the original video is just a way to prove that the system works, but there's nothing stopping this technique from being used to suck video out of people's heads directly.

Should I Change My Password? | How Safe Is Your Password? The Top 10 Relationship Words That Arent Translatable Into English | Marriage 3.0 Here are my top ten words, compiled from online collections, to describe love, desire and relationships that have no real English translation, but that capture subtle realities that even we English speakers have felt once or twice. As I came across these words I’d have the occasional epiphany: “Oh yeah! That’s what I was feeling...” Mamihlapinatapei (Yagan, an indigenous language of Tierra del Fuego): The wordless yet meaningful look shared by two people who desire to initiate something, but are both reluctant to start. Oh yes, this is an exquisite word, compressing a thrilling and scary relationship moment. Yuanfen (Chinese): A relationship by fate or destiny. From what I glean, in common usage yuanfen means the "binding force" that links two people together in any relationship. But interestingly, “fate” isn’t the same thing as “destiny.” Cafuné (Brazilian Portuguese): The act of tenderly running your fingers through someone's hair. Ya’aburnee (Arabic): “You bury me.”

30 Most Depressing Movies TotalFilm.com recently compiled a list of the Top 30 Most Depressing Movies of all time. I think it's a pretty accurate list. It goes without saying that here be spoilers. You've been warned. 30. The Boy In The Striped Pyjamas (2008)The Misery: You might think you know what you’re in for when you sit down in front of a Holocaust movie, but nothing can prepare you for the incredibly shocking ending to Mark Herman’s film. 1. Source What movies, listed here or not listed, depress you?

Some Bizzare and Odd things around us... Beauty of the nature lies in viewer’s eyes. A photograph is just a way to show or represent that beauty. Here is a bunch of some wonderful pictures which are not only the example of beautiful photography but are also a photograph of some miracles happening in the world. You can also call it the creativity and innovation of photographer’s mind. Some are really very cute and heart touching. I am simply in love with these photographs and I am sure you will too. Gibraltar Airport is one of the most extraordinary airports around the world. Morning Glory – kind of clouds observed in the Gulf of Carpentaria in northern Australia. The river above the river: Magdeburg Water Bridge, Germany. Heavy fog in Sydney, which enveloped the whole city. Skyscraper-Crescent Crescent Moon Tower (Dubai). Photo of storm in Montana, USA, 2010. Lighthouse guard in Mare, France must be one of the most courageous people on the planet! In northwestern Montana, USA. View of the sunset from inside the wave. Lena Pillars.

Did You Know Archive & 14 fun facts you probably didn't know Source Source Source Some other swear slangs were FLOGGING CULLY. A debilitated lecher, commonly an old one. TWIDDLE-DIDDLES. TWIDDLE POOP. Source Source Source Source Source Source Source Also known as Sleeping Beauty Syndrome Source Most Popular Posts This Week 9 Sites That Find People and Their 'Sensitive' Information At one time or another, you might need to get the goods on a stranger, like a prospective nanny or a business contact. Public records and people-finder sites are often the place to look; we list the best ones here. These sites use cool, Web 2.0 techniques to help you locate people, then (if need be) dig deep to find the "sensitive" intel about them you need. WhitePages.com: WhitePages and PeopleFinders are both good tools for tracking down people, their addresses, and their phone numbers, but the nod goes to White­Pages for its upcoming addition of voice and mobile capabilities. FriendFeed: Many content sharing and social networking sites exist now--Facebook, Flickr, Twitter, and so on--and my friends seem to be spread out evenly among them. Spock: This site looks for a person's school, work, and social affiliations, then displays photos, links to social network pages, Web sites, videos, and blogs about that person. Criminal Searches: Do you really know the people in your neighborhood?