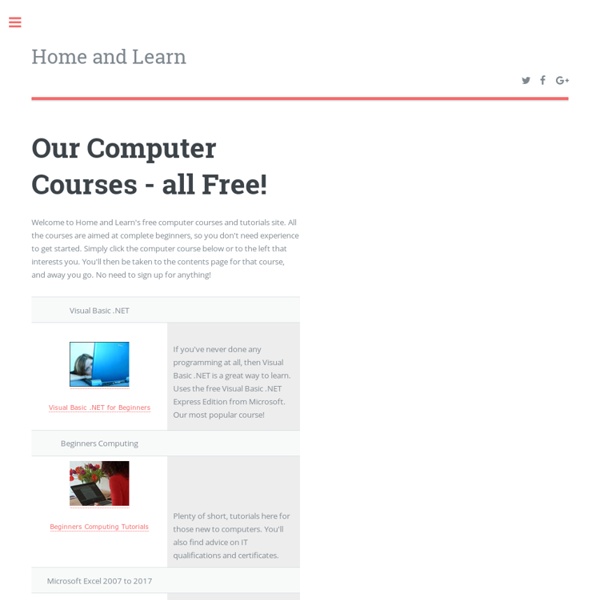 Compare Comparing strings in JavaScript is quite easy, as long as you know about the equals operator and the JavaScript If Statement. This is all you need to know to find out if two strings of your choosing are equal. Below we have created a fake authentication system and use an if statement to see if the user's name will grant them access to a special message. JavaScript Code: <script type="text/javascript"> var username = "Agent006"; if(username == "Agent007") document.write("Welcome special agent 007"); else document.write("Access Denied!")

Free Text-to-Speech / Learningline Click the Play button, below, to see a demonstration of how to download and install the LearningLine applications. Click here to download the LearningLine software Instructions for first time use of the LearningLine software Programming Languages Alan Perlis once said: "A language that doesn't affect the way you think about programming, is not worth knowing". Here are some opinions and facts about a selection of programming languages by Dr Mark Utting (a lecturer in the Department of Computer Science at The University of Waikato). The Open Directory Project has lots of programming language information. For examples of programming in 200+ different languages, check out the 99 Bottles of Beer page. The Dylan version is nice, but make sure you check out all the C++ versions too! The template version is amazing!

Lots of options for getting students into computer programming Mathew Kennedy started programming with LegoMindstorm when he was 8. Now, at age 15, he creates games and applications for phones and computer systems. His father, William Kennedy, applauds the hobby and wishes all kids could be exposed to programming. "It's fun," said Kennedy, who has hired hundreds of software engineers at Microsoft, "and it will be more and more important in the job market as these kids grow up." Free Microsoft Excel Leaning Materials Beginners-Specific Tasks Help from George M To listen to narrated slides you need Flash. Download►

Digital Basics - the Beehive - Learn to Use Computers and the Internet Safely and Intelligently Read Me! | Understanding How to Use This Site Welcome to the Beehive’s Digital Basics. How Data Integration Works" For the average Joe, information technology (IT) is a mysterious universe filled with indecipherable programming languages and expensive hardware. Eavesdropping on IT technicians is almost like overhearing a conversation spoken in a foreign language. But despite this seemingly impenetrable language barrier, it can be critically important for decision-makers in businesses and organizations to understand the world of IT. One of the most important IT concepts is data integration. On the surface, data integration sounds like a simple idea.

restore accidentally deleted files and folders in windows 7 If you're new here, you may want to subscribe to Windows Reference RSS feed Thanks for visiting! If you delete your files or folders Accidentally in windows 7 use the following procedureIn Windows 7 if you have restore points created, “Previous Versions” of files and folders might be available. All you need to do is right-click on the folder your data was located in (or the folder above) and choose Properties–if your music was located in the Music library, the path to the folder should be c:\users\username\My Music. Click on the Previous Versions tab. Find a restore date from before the data disappeared and click Open.

How Perl Works" Perl is a fairly straightforward, widely known and well-respected scripting language. It is used for a variety of tasks (for example, you can use it to create the equivalent of DOS batch files or C shell scripts), but in the context of Web development it is used to develop CGI scripts. One of the nice things about Perl is that, because it is a scripting language, people give away source code for their programs. This gives you the opportunity to learn Perl by example, and you can also download and modify thousands of Perl scripts for your own use. One of the bad things about Perl is that much of this free code is impossible to understand. Perl lends itself to an unbelievably cryptic style! Introduction to Microsoft Help Workshop 4.0 - no.good.at.coding Note: This was written quite a while back, when I was working with Visual Basic. I've been out of touch with programming for Windows since I began programming in Java so I'm not really familiar with this anymore. When I was making my SMS programs ready for distribution I wanted to make a help file for them to have a complete package. At first the Help Workshop 4.0 interface didn't make any sense to me and the help file didn't help either, it was more of a reference. I then looked around on the net but didn't really get a straight tutorial to get me started.

WinBeginners Clicking a link below will open a tutorial in a new window. When you have finished looking at a tutorial, close its window to return to the main menu. Elementary computer concepts Slide show introducing computers Presents elementary concepts of how computers work and what the essential components such as the CPU, RAM, and the hard drive are. Briefly describes the concept of an operating system and what the file system is.

The Basics of C Programming" The C programming language is a popular and widely used programming language for creating computer programs. Programmers around the world embrace C because it gives maximum control and efficiency to the programmer. If you are a programmer, or if you are interested in becoming a programmer, there are a couple of benefits you gain from learning C: You will be able to read and write code for a large number of platforms -- everything from microcontrollers to the most advanced scientific systems can be written in C, and many modern operating systems are written in C.The jump to the object oriented C++ language becomes much easier. C++ is an extension of C, and it is nearly impossible to learn C++ without learning C first.