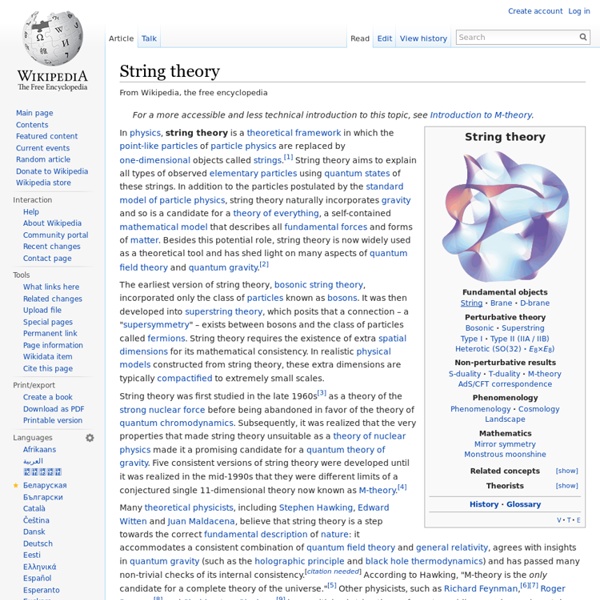 String theory was first studied in the late 1960s[3] as a theory of the strong nuclear force before being abandoned in favor of the theory of quantum chromodynamics. Subsequently, it was realized that the very properties that made string theory unsuitable as a theory of nuclear physics made it a promising candidate for a quantum theory of gravity. Five consistent versions of string theory were developed until it was realized in the mid-1990s that they were different limits of a conjectured single 11-dimensional theory now known as M-theory.[4] Many theoretical physicists, including Stephen Hawking, Edward Witten and Juan Maldacena, believe that string theory is a step towards the correct fundamental description of nature: it accommodates a consistent combination of quantum field theory and general relativity, agrees with insights in quantum gravity (such as the holographic principle and black hole thermodynamics) and has passed many non-trivial checks of its internal consistency.

Car Lease Takeover - Lease Transfer - How does it work? What is a car lease takeover or lease transfer? How does it work? In a tough economy, automotive consumers look for affordable ways to drive the cars they need and want. Lease takeovers, or lease transfers, are increasingly providing the ideal answer for many of these consumers. Although lease transfers have been around for years, it has now become the hottest new way to acquire a late model automobile at the lowest possible cost. Here's how a car lease takeover works Someone who is currently leasing a car wants out of their lease. Mitchell Feigenbaum Mitchell Jay Feigenbaum (born December 19, 1944) is a mathematical physicist whose pioneering studies in chaos theory led to the discovery of the Feigenbaum constants. Biography[edit] Feigenbaum was born in New York City,[1] to Polish and Ukrainian Jewish immigrants. He attended Samuel J.

StumbleUpon Zeno's "Paradox of the Arrow" passage from Biocentrismby Robert Lanza M.D.Related Posts:The Paradox Of The Infinite CircleThe Liar ParadoxThe Barber Paradox Tags: paradoxes Posted in Time Merging with Siva, Chapter 13: Five Steps to Enlightenment Monday LESSON 85 Step One: Attention The grand old man of the East who ordained me, Jnanaguru Yoganathan, Yogaswami of Jaffna, used to say time and time again, "It was all finished long ago." It's finished already. Edward Norton Lorenz Edward Norton Lorenz (May 23, 1917 – April 16, 2008)[1][2] was an American mathematician and meteorologist, and a pioneer of chaos theory.[3] He introduced the strange attractor notion and coined the term butterfly effect. Biography[edit] Lorenz was born in West Hartford, Connecticut.[4] He studied mathematics at both Dartmouth College in New Hampshire and Harvard University in Cambridge, Massachusetts. From 1942 until 1946, he served as a meteorologist for the United States Army Air Corps. After his return from World War II, he decided to study meteorology.[2] Lorenz earned two degrees in the area from the Massachusetts Institute of Technology where he later was a professor for many years. He was a Professor Emeritus at MIT from 1987 until his death.[2]

The Ultimate Field Guide to Subatomic Particles - io9 This is, for the most part, an accurate article, except for a few statements. "Exactly what makes a fermion a fermion is a bit complicated, but suffice it to say that fermions are all the particles that deal with matter. So what about the last group of elementary particles, the ones that don't deal with matter? These are the bosons, and they deal with the fundamental forces of the universe." Eric Weinstein may have found the answer to physics' biggest problems Two years ago, a mathematician and physicist whom I've known for more than 20 years arranged to meet me in a bar in New York. What he was about to show me, he explained, were ideas that he'd been working on for the past two decades. As he took me through the equations he had been formulating I began to see emerging before my eyes potential answers for many of the major problems in physics. It was an extremely exciting, daring proposal, but also mathematically so natural that one could not but feel that it smelled right.

Edward Lorenz, father of chaos theory and butterfly effect, dies at 90 Edward Lorenz, an MIT meteorologist who tried to explain why it is so hard to make good weather forecasts and wound up unleashing a scientific revolution called chaos theory, died April 16 of cancer at his home in Cambridge. He was 90. A professor at MIT, Lorenz was the first to recognize what is now called chaotic behavior in the mathematical modeling of weather systems. In the early 1960s, Lorenz realized that small differences in a dynamic system such as the atmosphere--or a model of the atmosphere--could trigger vast and often unsuspected results.

"Cargo Cult Science" - by Richard Feynman Richard Feynman From a Caltech commencement address given in 1974 Also in Surely You're Joking, Mr. Feynman! During the Middle Ages there were all kinds of crazy ideas, such as that a piece of of rhinoceros horn would increase potency. Then a method was discovered for separating the ideas--which was to try one to see if it worked, and if it didn't work, to eliminate it. Henri Poincaré French mathematician, physicist, engineer, and philosopher of science Jules Henri Poincaré (,[4] ;[5][6][7] French: [ɑ̃ʁi pwɛ̃kaʁe] ( listen);[8][9] 29 April 1854 – 17 July 1912) was a French mathematician, theoretical physicist, engineer, and philosopher of science.