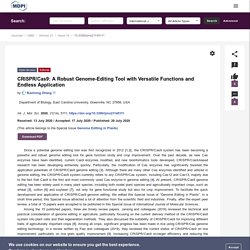 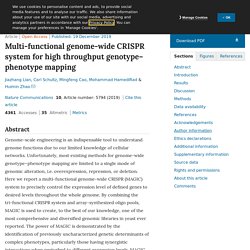 S. cerevisiae BY4742 was used as the host for genome-scale engineering of furfural tolerance and surface display of recombinant proteins. Yeast strains were cultivated in complex medium consisting of 2% peptone, 1% yeast extract, and 2% glucose (YPD) or synthetic complete medium consisting of 0.17% yeast nitrogen base, 0.1% mono-sodium glutamate, 0.077% CSM-URA, and 2% glucose (SED-URA) at 30 °C, 250 rpm.

When necessary, 200 μg mL−1 G418 (KSE Scientific, Durham, NC, USA) was supplemented. Plasmid and strain construction SNR52p-BsaI-BsaI-gRNA structural sequences-SUP4t8 were cloned into BsaI-free pRS426 to construct gRNA expression plasmids, including p426*-LbSgH for CRISPRa, p426*-SpSgH for CRISPRi, and p426*-SaSgH for CRISPRd. NATURE 15/01/20 The kill-switch for CRISPR that could make gene-editing safer. It started out as “sort of a stupid thing to do”, recalls Joe Bondy-Denomy, a microbiologist at the University of California, San Francisco. 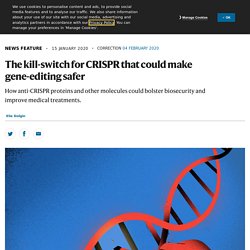 As a graduate student in the early 2010s, he tried to infect bacteria with viruses that, on paper, shouldn’t have stood a chance. He knew that these viruses, or phages, were susceptible to CRISPR–Cas, the bacterial defence system that scientists have harnessed as a powerful tool for gene editing. And in most cases, he was right: the CRISPR machinery chopped the incoming phages into bits. But in a few instances, against the odds, the intruders survived. FRONT. SUSTAIN. FOOD SYST. 15/11/19 On-Farm Livestock Genome Editing Using Cutting Edge Reproductive Technologies. Introduction Preparing to feed a balanced and nutritious diet to the projected 9.7 billion people on the globe by 2050 will be one of the greatest challenges humanity has ever faced. 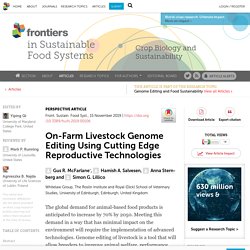 The FAO estimates demand for animal-based food products will increase by 70% in this time (Alexandratos and Bruinsma, 2012). Increasing reliance on plant-based diets and artificial meat production will contribute to improving food security and the sustainability of commercial agriculture, however outright omission of animal protein from human diets risks nutritional deficiencies and malnutrition, particularly in developing regions.

Meeting the anticipated increase in demand for animal food products in a way that has minimal impact on the environment and ensures high animal welfare standards will likely require the implementation of advanced technologies, including genome editing and cutting-edge reproductive technologies. FRONT. GENET. 03/09/19 Sheep and Goat Genome Engineering: From Random Transgenesis to the CRISPR Era. Introduction Generating new and variable phenotypes via direct alteration of DNA sequences is an interesting idea that has sparked the curiosity of a wide spectrum of researchers over the past few decades. 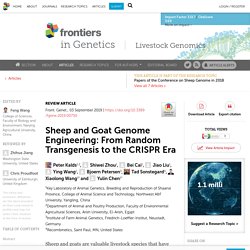 Based on significant efforts, tremendous advances have been achieved in animal genetics and reproductive physiology. These have enabled what is now known as the genome-editing revolution that can be applied to generate gene-edited animals including sheep and goats for various purposes (Figure 1). Figure 1 Applications and aims of genome engineering in sheep and goats. About 40 years ago, a set of basic techniques were applied to sheep embryos with the desire to generate identical twins, multiplets, and chimeras. FRONT BIOENG BIOTECHNOLOL - 2019 - Regulatory Status of Genome-Edited Organisms Under the Japanese Cartagena Act. EFSA 07/08/19 Literature review of baseline information on non‐coding RNA (ncRNA) to support the risk assessment of ncRNA‐based genetically modified plants for food and feed. 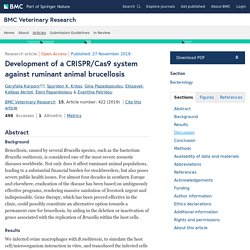 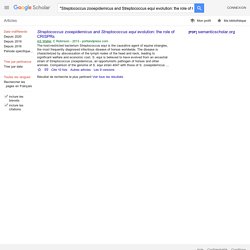 The disease is characterized by abscessation of the lymph nodes of the head and neck, leading to significant welfare and economic cost. S. equi is believed to have evolved from an ancestral strain of Streptococcus zooepidemicus, an opportunistic pathogen of horses and other animals. Comparison of the genome of S. equi strain 4047 with those of S. zooepidemicus … APHIS USDA 19/04/19 Genome Edited Pennycress Lines Developed with CRISPR. ANNUAL REVIEWS - AVRIL 2019 - CRISPR/Cas Genome Editing and Precision Plant Breeding in Agriculture. ADVANCED SCIENCE 06/02/20 CRISPR/Cas Systems in Genome Editing: Methodologies and Tools for sgRNA Design, Off‐Target Evaluation, and Strategies to Mitigate Off‐Target Effects. 1 E‐CRISP/Cas Systems Genome editing (GE) tools have modernized the genetics by their potential use in the precise modification of genomic DNA.1 These GE tools include ZFNs (zinc finger nucleases), TALENs (transcription activator‐like effector nucleases), CRISPR (clustered regulatory interspaced short palindromic repeats)/Cas9 (CRISPR‐associated proteins), and related CRISPR/Cas systems. 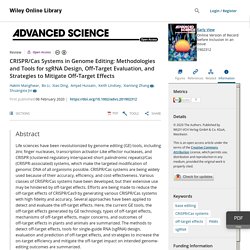 Among these GE tools, CRISPR/Cas systems are extensively used in comparison with other methods because they are cost‐effective, easy to use, and do not require specialist skills.2 The CRISPR/Cas9 system requires an RNA designing with a short guide sequence (sgRNA) that directs a Cas9 nuclease for cleaving any target sequence.3 Cas9 is a CRISPR RNA‐guided endonuclease that cuts dsDNA targets complementary to the sgRNAs4 and is being exploited for GE in bacteria5 and in eukaryotic cells,6 including animal cells,7 mammalian systems,8, 9 and plants.10, 11. 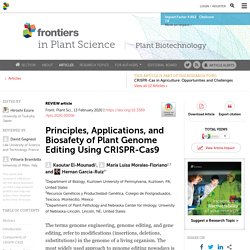 While the available farm land and water are being reduced, the global demand for food will increase 25%–70% above current production levels (Hunter et al., 2017). Thus, feeding a rapidly growing population, particularly in the face of climate change, is a big challenge. There is, therefore, an urgent need to improve food production and accelerate sustainable agricultural development. Long time before the field of genetics was established, humans genetically modified plants through breeding and selection. To make plant breeding faster, more predictable, and amendable to a wide range of species, several techniques of plant genetic engineering have been developed. BIORXIV 12/03/20 A genome-scale CRISPR interference guide library enables comprehensive phenotypic profiling in yeast. 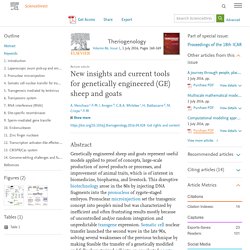 This disruptive biotechnology arose in the 80s by injecting DNA fragments into the pronucleus of zygote-staged embryos. Pronuclear microinjection set the transgenic concept into people's mind but was characterized by inefficient and often frustrating results mostly because of uncontrolled and/or random integration and unpredictable transgene expression. Somatic cell nuclear transfer launched the second wave in the late 90s, solving several weaknesses of the previous technique by making feasible the transfer of a genetically modified and fully characterized cell into an enucleated oocyte, capable of cell reprogramming to generate genetically engineered animals.

NATURE 15/01/20 The kill-switch for CRISPR that could make gene-editing safer. NATURE 19/12/19 Multi-functional genome-wide CRISPR system for high throughput genotype–phenotype mapping. FRONT. GENET. 03/09/19 Sheep and Goat Genome Engineering: From Random Transgenesis to the CRISPR Era. PLOS 12/11/19 CRISPR/Cas9 gene editing in the West Nile Virus vector, Culex quinquefasciatus Say. Abstract Culex quinquefasciatus Say is an opportunistic blood feeder with a wide geographic distribution which is also a major vector for a range of diseases of both animals and humans.

CRISPR/Cas technologies have been applied to a wide variety of organisms for both applied and basic research purposes. CRISPR/Cas methods open new possibilities for genetic research in non-model organisms of public health importance. In this work we have adapted microinjection techniques commonly used in other mosquito species to Culex quinquefasciatus, and have shown these to be effective at generating homozygous knock-out mutations of a target gene in one generation.

Background Genome editing refers to techniques, in which specialised enzymes that have been modified can insert, replace, or remove DNA from a genome with a high degree of specificity; the techniques represent the latest innovation in the toolbox of genetic engineering/modification (GE/GM) methods. Especially the most discussed genome editing system known as CRISPR/Cas9 (i.e. “Clustered Regularly Interspaced Short Palindromic Repeats”, using the CRISPR-associated protein 9) has received wide-spread application, because it enables the development of easily deployable low-cost tools for innovation in biomedicine, agriculture, industrial biotechnology and other sectors relating to the bioeconomy. Table 1. Four types of genome editing need to be distinguished, especially with regard to potential discrepancies in the regulatory approaches to the techniques and/or their products.

These results could pave the way for scientists examining a wide range of arthropods -- and even some vertebrates -- to more easily manipulate gene expression for fundamental research and practical applications such as control of vector-borne diseases like Zika virus and malaria, elimination of agricultural insect pests, and potentially gene therapy for human and animal health. CRISPR -- Clustered Regularly Interspaced Short Palindromic Repeats -- is a relatively new and revolutionary way to modify an organism's genome by precisely delivering a DNA-cutting enzyme, Cas9, to a targeted region of DNA.

Abstract Leishmania parasites cause human cutaneous, mucocutaneous and visceral leishmaniasis. Several studies proposed involvement of certain genes in infectivity of these parasites based on differential mRNA expression data. Due to unusual gene expression mechanism, functions of such genes must be further validated experimentally. Here, we investigated a role of one of the putative virulence factors, LmxM.22.0010-encoded BTN1 (a protein involved in Batten disease in humans), in L. mexicana infectivity.

BERKELEY_EDU - From Genes to Global Solutions CNR faculty lead wide-ranging research initiatives at the Innovative Genomics Institute - Revolutionizing agriculture in the developing world (CRISPR) Zilberman is a little more blunt, focusing on the risks of not using CRISPR. THE SCIENTIST 02/04/18 USDA Will Not Regulate CRISPR-Edited Crops. Restrictions will remain on transgenic plants, which contain artificially inserted genes from other species. NATIONAL ACADEMY OF SCIENCES (NAS) - 2018 NAS prize in food and agriculture sciences. (concerne CRISPR) ZMESCIENCE 05/09/17 CRISPR used for first time to change flower color in Japanese ornamental plant. With the help of the mighty CRISPR gene editing tool, scientists changed the flower color of a traditional Japanese garden plant from violet to white. The alteration was so precise only a single gene disruption was enough to introduce this effect.

FRONT PHYSIOL 06/09/17 Progress and Prospects of CRISPR/Cas Systems in Insects and Other Arthropods. ECDC 03/05/17 ECDC assesses risk of ‘do-it-yourself’ CRISPR gene engineering kit contaminated with pathogenic bacteria. CORNELL ALLIANCE FOR SCIENCE - AVRIL 2018 - Bill Gates: Gene editing can help humanity. Channel SRUK-CERU VIA YOUTUBE 28/02/18 5th Anniversary Seminar in Edinburgh: CRISPR - Prof. Bruce Whitelaw, Roslin Institute (08-04-2017) BUSINESS INSIDER 27/03/18 Monsanto is on the verge of producing the first fruit made with a blockbuster gene-editing tool that could revolutionize agriculture. BUSINESS INSIDER 12/04/18 A controversial technology could save us from starvation — if we let it (CRISPR)

BUSINESS INSIDER 12/04/18 A controversial technology could save us from starvation — if we let it (CRISPR) BUSINESS INSIDER 27/03/18 Monsanto is on the verge of producing the first fruit made with a blockbuster gene-editing tool that could revolutionize agriculture. NATIONAL REVIEW 19/03/18 CRISPR Will Make GMOs Ubiquitous. SCIENCE DAILY 08/03/18 Gene knockout using new CRISPR tool makes mosquitoes highly resistant to malaria parasite Study highlights the potential of mosquito gene-modification to combat malaria. Science. 2017 Sep 22;357(6357) Inactivation of porcine endogenous retrovirus in pigs using CRISPR-Cas9. VIRUSES 13/02/18 The Application of NHEJ-CRISPR/Cas9 and Cre-Lox System in the Generation of Bivalent Duck Enteritis Virus Vaccine against Avian Influenza Virus. Viruses. 2018 Jan 30;10(2). CRISPR-Cas9 Genetic Analysis of Virus-Host Interactions. GENETIC LITERACY PROJECT 24/01/18 Genetic engineering, CRISPR and food: What the 'revolution' will bring in the near future.