9 Elements. 15 Apps and Websites Kids Are Heading to After Facebook. Gone are the days of Facebook as a one-stop shop for all social-networking needs. 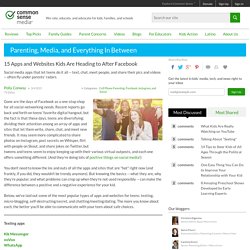 Recent reports go back and forth on teens' favorite digital hangout, but the fact is that these days, teens are diversifying: dividing their attention among an array of apps and sites that let them write, share, chat, and meet new friends. It may seem more complicated to share photos on Instagram, post secrets on Whisper, flirt with people on Skout, and share jokes on Twitter, but tweens and teens seem to enjoy keeping up with their various virtual outposts, and each one offers something different.

Protect your teens: 7 apps and websites parents should be aware of. The dangers of Facebook to teens and young people is well documented. 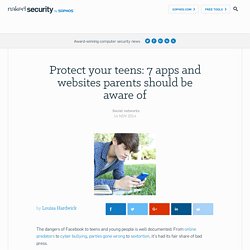 From online predators to cyber bullying, parties gone wrong to sextortion, it’s had its fair share of bad press. But it’s not just Facebook where teens are hanging out. In fact, it isn’t as popular as you might think. Teens’ interest in Facebook is fading and they’re heading in droves to apps and social platforms where they can’t bump into their dads, and can post photos without shocking Grandma. If you want to protect your kids you need to know where they are. Instagram According to a recent study, Instagram is now the most popular social network for US teens.

Instagram has lagged behind other social networks badly when it comes to using HTTPS which means that account hijacking is trivial. It’s important to make sure your teen’s privacy settings are locked down as photo visibility is set by default to public. Snapchat This app, rated 12+ on the AppStore, is extremely popular among young people. 4chan Yik Yak Tinder. 9 Most Dangerous Apps for Kids. In 2013, a twelve-year-old girl was lured away from her home by a 21 year-old-man. 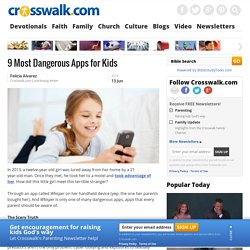 Once they met, he took her to a motel and took advantage of her. How did this little girl meet this terrible stranger? Through an app called Whisper on her handheld device (yep, the one her parents bought her). And Whisper is only one of many dangerous apps, apps that every parent should be aware of. The Scary Truth “The bad guy’s not just at the bus stop anymore. Digital Citizenship Videos. Understanding Your Students: A Glimpse into the Media Habits of Tweens and Teens. For today's tweens and teens, technology is part of the fabric of everyday life. 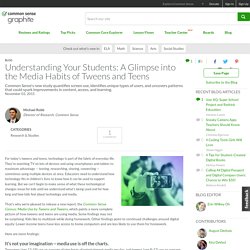 They're watching TV on lots of devices and using smartphones and tablets to maximum advantage -- texting, researching, sharing, connecting -- sometimes using multiple devices at once. Educators need to understand how technology fits in children's lives to know how it can be used to support learning. But we can't begin to make sense of what these technological changes mean for kids until we understand what's being used and for how long and how kids feel about technology and media. That's why we're pleased to release a new report, the Common Sense Census: Media Use by Tweens and Tweens, which paints a more complete picture of how tweens and teens are using media. Some findings may not be surprising: Kids like to multitask while doing homework. Got Media Smarts? Quiz.

Know the Net. Nine Elements of DC. Nine Themes of Digital Citizenship Digital citizenship can be defined as the norms of appropriate, responsible behavior with regard to technology use. 1. 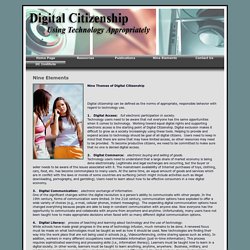 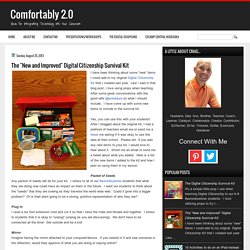 Like I said in that blog post, I love using props when teaching. After some great conversations with the good wife @jenbadura on what I should include, I have come up with some new items to include in the survival kit. Yes, you can use this with your students! After I blogged about the original kit, I had a plethora of teachers email me or send me a tweet me asking if it was okay to use this idea at their school. Please do! Packet of Seeds Any packet of seeds will do for your kit. Plug In I used a six foot extension cord and cut it so that I have the male and female end together. Mirror Imagine having the mirror attached to your computer/device.

Sheet of Paper One of the most powerful items in the kit. Magnifying Glass Remember when first impressions started with a handshake? Strainer The amount of information on the internet is amazing! Soap. Photos from Flickr. Digital Citizenship Whitepaper and Reputation Guide from ikeepsafe.org. Your digital reputation matters. 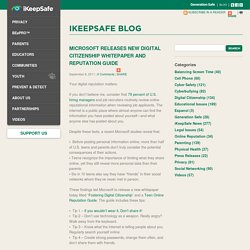 If you don’t believe me, consider that 79 percent of U.S. hiring managers and job recruiters routinely review online reputational information when reviewing job applicants. The internet is a public place where almost anyone can find the information you have posted about yourself—and what anyone else has posted about you. Despite these facts, a recent Microsoft studies reveal that: • Before posting personal information online, more than half of U.S. teens and parents don’t truly consider the potential consequences of their actions. • Teens recognize the importance of limiting what they share online, yet they still reveal more personal data than their parents. • Six in 10 teens also say they have “friends” in their social networks whom they’ve never met in person.