ANTIBIOTICS 12/09/19 Global Internet Data on the Interest in Antibiotics and Probiotics Generated by Google Trends. Data from the Google search engine enables the assessment of Google users’ interest in a specific topic. 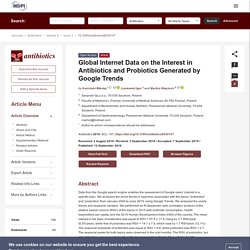 We analyzed the world trends in searches associated with the topics “antibiotics” and “probiotics” from January 2004 to June 2019, using Google Trends. We analyzed the yearly trends and seasonal variation. We performed an R-Spearman rank correlation analysis of the relative search volume (RSV) of the topics in 2015 with antibiotic consumption, health expenditure per capita, and the 2015 Human Development Index (HDI) of the country. The mean interest in the topic of antibiotics was equal to RSV = 57.5 ± 17.9, rising by 3.7 RSV/year (6.5%/year), while that of probiotics was RSV = 14.1 ± 7.9, which rose by 1.7 RSV/year (12.1%).

The seasonal amplitude of antibiotics was equal to RSV = 9.8, while probiotics was RSV = 2.7. ►▼ Show Figures Figure 1. THE LANCET 05/11/18 Attributable deaths and disability-adjusted life-years caused by infections with antibiotic-resistant bacteria in the EU and the European Economic Area in 2015: a population-level modelling analysis. RIVM_NL - 2018 - NethMap 2018: Consumption of antimicrobial agents and antimicrobial resistance among medically important bacteria in the Netherlands / MARAN 2018: Monitoring of Antimicrobial Resistance and Antibiotic Usage in Animals in the Netherlands i. THE LANCET 17/05/18 Antimicrobial resistance among migrants in Europe: a systematic review and meta-analysis. PUBLIC HEALTH ENGLAND 08/08/17 Management and treatment of common infections: antibiotic guidance for primary care.

PLOS 04/05/16 High Prevalence of Infectious Diseases and Drug-Resistant Microorganisms in Asylum Seekers Admitted to Hospital; No Carbapenemase Producing Enterobacteriaceae until September 2015. Abstract Introduction The current refugee crisis emphasizes the need for information on infectious diseases and resistant microorganisms in asylum seekers with possible consequences for public health and infection control. 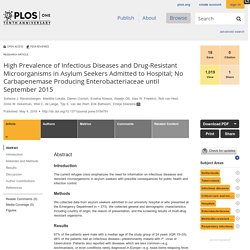 Methods We collected data from asylum seekers admitted to our university hospital or who presented at the Emergency Department (n = 273). EMA - JUNE 2016 - Eurobarometer survey on the use and perceptions of antibiotics in the EU. The emerging and steady increase of microbes that are resistant to antimicrobial treatments has become a global public health concern that threatens the effective treatment of infectious diseases. 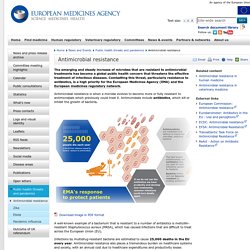 Combatting this threat, particularly resistance to antibiotics, is a high priority for the European Medicines Agency (EMA) and the European medicines regulatory network. Antimicrobial resistance is when a microbe evolves to become more or fully resistant to antimicrobials which previously could treat it. Antimcirobials include antibiotics, which kill or inhibit the growth of bacteria. Download image in PDF format A well-known example of a bacterium that is resistant to a number of antibiotics is meticillin-resistant Staphylococcus aureus (MRSA), which has caused infections that are difficult to treat across the European Union (EU). Infections by multidrug-resistant bacteria are estimated to cause 25,000 deaths in the EU every year. Agency role EMA Executive Director, Prof. EU initatives. 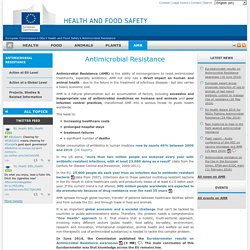 AMR not only has a direct impact on human and animal health - due to the failure in the treatment of infectious diseases - but also carries a heavy economic cost. AMR is a natural phenomenon but an accumulation of factors, including excessive and inappropriate use of antimicrobial medicines on humans and animals and poor infection control practices, transformed AMR into a serious threat to public health worldwide. This leads to: increasing healthcare costs prolonged hospital stays treatment failures a significant number of deaths Global consumption of antibiotics in human medicine rose by nearly 40% between 2000 and 2010 (UK Report). In the US alone, "more than two million people are sickened every year with antibiotic-resistant infections, with at least 23.000 dying as a result" (data from the Centers for Disease Control and Prevention, 2009-2011). 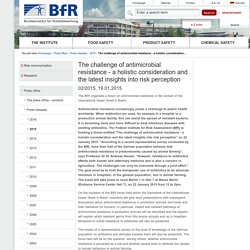 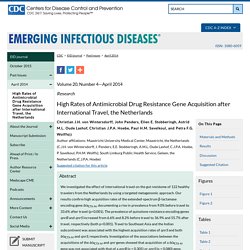 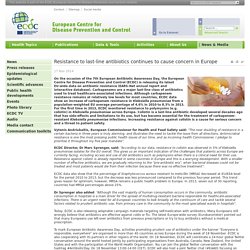 Carbapenems are a major last-line class of antibiotics used to treat healthcare-associated infections. Although carbapenem resistance remains at relatively low levels for most countries, ECDC data show an increase of carbapenem resistance in Klebsiella pneumoniae from a population-weighted EU average percentage of 4.6% in 2010 to 8.3% in 2013. For the first time in 2013, ECDC monitored resistance to polymyxins (e.g. colistin) in Klebsiella pneumoniae across Europe. Colistin is a last-line antibiotic developed several decades ago that has side-effects and limitations to its use, but has become essential for the treatment of carbapenem-resistant Klebsiella pneumoniae infections. More information: EARS-Net annual report: EUROPE 13/05/14 EU and US progress in the fight against antimicrobial resistance. EUROPE - NOV 2013 - EUROBAROMETRE SPECIAL 407 - LA RÉSISTANCE AUX ANTIMICROBIENS. Int J Public Health (2010) 55:469–478 Socioeconomic determinants of outpatient antibiotic use in Europe. 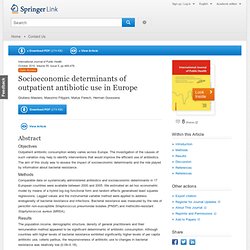 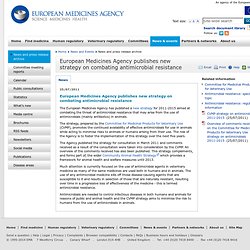 The strategy, prepared by the Committee for Medicinal Products for Veterinary Use (CVMP), promotes the continued availability of effective antimicrobials for use in animals while acting to minimise risks to animals or humans arising from their use. The role of the Agency is to foster the implementation of this strategy over the next five years. The Agency published the strategy for consultation in March 2011 and comments received as a result of the consultation were taken into consideration by the CVMP. An overview of the comments received has also been published. This strategy complements, and forms part of, the wider Community Animal Health Strategy which provides a framework for animal health and welfare measures until 2013. The Plymouth Student Scientist, 2011, 4, (2), 252-266 [252] Current and emerging issues in nosocomial infections and antibiotic.