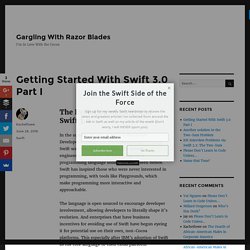 Since then, the software engineering world has seen a passion for a programming language unlike anything seen before. Swift has inspired those who were never interested in programming, with tools like Playgrounds, which make programming more interactive and approachable. The language is open sourced to encourage developer involvement, allowing developers to literally shape it’s evolution.

And enterprises that have business incentives for avoiding use of Swift have begun eyeing it for potential use on their own, non-Cocoa platforms. But while Swift enjoys great success in enterprise and popularity, it has not been without hiccups. Swift Grows Up After years in the making, the first “mature” version of Swift will be released in the form of Swift 3.0. Why is it important to understand the changes from Swift 2.2 to Swift 3.0 e.g. would become 5. 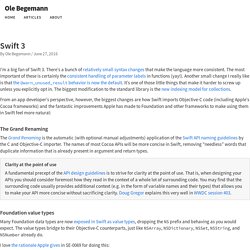 There’s a bunch of relatively small syntax changes that make the language more consistent. The most important of these is certainly the consistent handling of parameter labels in functions (yay!). Another small change I really like is that the @warn_unused_result behavior is now the default. It’s one of those little things that make it harder to screw up unless you explicitly opt in.

The biggest modification to the standard library is the new indexing model for collections. From an app developer’s perspective, however, the biggest changes are how Swift imports Objective-C code (including Apple’s Cocoa frameworks) and the fantastic improvements Apple has made to Foundation and other frameworks to make using them in Swift feel more natural: The Grand Renaming The Grand Renaming is the automatic (with optional manual adjustments) application of the Swift API naming guidelines by the C and Objective-C importer. 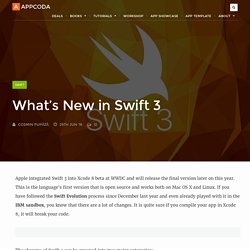 This is the language’s first version that is open source and works both on Mac OS X and Linux. If you have followed the Swift Evolution process since December last year and even already played with it in the IBM sandbox, you know that there are a lot of changes. It is quite sure if you compile your app in Xcode 8, it will break your code. The changes of Swift 3 can be grouped into two major categories: Removed features that have already been deprecated in Swift 2.2Language modernisation issues Let’s start with the removed ones, since they are easier to understand and you may have encountered them before as warnings in Xcode 7.3. ++ and — Operators The increment and decrement operators are inherited from C and their functionality is straightforward – add or subtract 1 to a certain variable: var i = 0 i++ ++i i-- --i C-style for Loop is History for (i = 1; i <= 10; i++) { print(i) } Summary.

Swift Knowledge Base - free Swift 3 example code. Free example code you can take and re-use in your own projects. 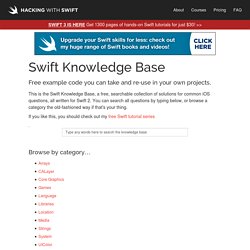 This is the Swift Knowledge Base, a free, searchable collection of solutions for common iOS questions, all written for Swift 2. You can search all questions by typing below, or browse a category the old-fashioned way if that's your thing. If you like this, you should check out my free Swift tutorial series Browse by category… Frequently asked questions Why is this better than just using Google? Swift is a language that has changed a lot since its launch, and continues to change with every new Xcode release.