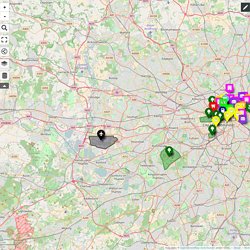 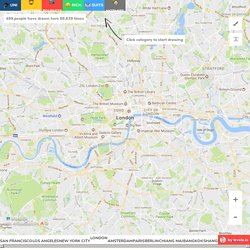 TransforMap. Oxford Mapathon Tickets, Sat, 1 Oct 2016 at 10:00. We're kick-starting House of the Commons 2016 with Oxford Mapathon, an interactive mapping session with an introductory talk by Andy Wightman, author of 'Who Owns Scotland', 'Community Land Rights: A Citizens Guide' and 'The Poor Had No Lawyers', together with Tom Kenny from Shared Assets. 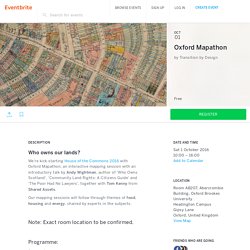 Our mapping sessions will follow through themes of food, housing and energy, chaired by experts in the subjects. Note: Exact room location to be confirmed. Programme: 9am - set up room10:00-10:30 Intro/Logistics/What do we want from today? (discuss on tables (3 tables) for 5mins and one person from each feeds back)10:30-10:45 Andy Wightman 'Who owns Scotland How-to'10:45-11:00 Shared Assets approach11:00-11:15 - Explain the exercise: Mapping three land ownership themes (food/energy/housing). Fight The Flights London City Airport. MapLocal Community Mapping – fields. Last year and into this year I was involved in an AHRC Connected Communities project led by Phil Jones with Colin Lorne and Antonia Layard (University of Birmingham) in which we designed an Android app that allowed residents of communities to gather information about their neighbourhoods. 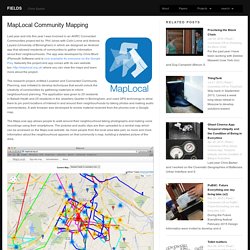 The app was developed by Chris Blunt (Plymouth Software) and is now available for everyone on the Google Play. Naturally the project and app comes with its own website too: where you can view the maps and learn more about the project. The research project, entitled Localism and Connected Community Planning, was initiated to develop techniques that would unlock the creativity of communities by gathering materials to inform neighbourhood planning.

The MapLocal app allows people to walk around their neighbourhood taking photographs and making voice recordings using their smartphone. The pictures and audio clips are then uploaded to a central map which can be accessed on the MapLocal website. Data Visualisations - Concrete Action. Tekja - Open City Docs. Tom Chance. Mapping the Material Practices of Participatory Sensing. This project taken an Actor-Network approach and a device ethnography to follows a series of participatory sensing tools and their networks as they transverse ontological & political boundaries. 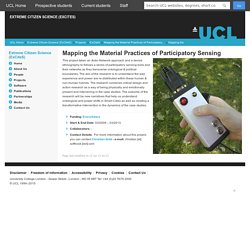 The aim of the research is to understand the way experience and power are re-distributed within these human & non-human hybrids. The research combines critical design and action research as a way of being physically and emotionally present and intervening in the case studies. The outcome of the research will be new narratives that help us understand ontological and power shifts in Smart Cities as well as creating a transformative intervention in the dynamics of the case studies. Shaping London: The patterns and forms that make the metropolis - Terry Farrell. In this wholly new and dynamic view of London, renowned architect and urban planner Sir Terry Farrell joins up the dots and creates new connections between London's past, present and future. 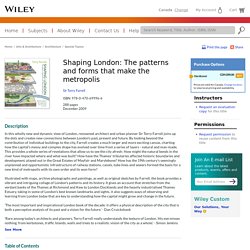 By looking beyond the contribution of individual buildings to the city, Farrell creates a much larger and more exciting canvas, charting how the capital's messy and complex shape has evolved over time from a series of layers - natural and man-made. This provides a whole series of revelations that allow us to see the city afresh: How might the natural bends in the river have impacted where and what was built? How have the Thames' tributaries affected historic boundaries and development, played out in the Great Estates of Mayfair and Marylebone?

How has the 19th century's seemingly unplanned and opportunistic infrastructure of railway stations, canals, tube lines and sewers formed the basis for a new kind of metropolis with its own order and its won form? Professor Richard Dennis — UCL Department of Geography. Room 110, 26 Bedford Way London WC1H 0AP Phone: 020 7679 7563Fax: 020 7679 7565E-Mail: r.dennis@ucl.ac.uk Richard Dennis read Geography as an undergraduate and postgraduate at Sidney Sussex College, Cambridge. 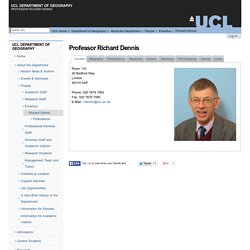 His PhD thesis, 'Community and social interaction in a Victorian city: Huddersfield, 1850-1880', prepared the way for a book on English Industrial Cities of the Nineteenth Century: A Social Geography (Cambridge University Press, 1984). After a year as Junior Research Fellow in Geography at the University of Sheffield, he was appointed Lecturer at UCL in 1974, and promoted to Reader in 1991 and Professor in 2009. He has also spent periods as a Leverhulme Research Fellow and Research Associate at the University of Toronto (1986-87), as Visiting Lecturer in Geography at UCLA (1982), and as Visiting Professor at Macalaster College and the University of Minnesota (1991). 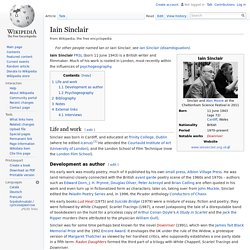 Much of his work is rooted in London, most recently within the influences of psychogeography. Life and work[edit] Development as author[edit] His early work was mostly poetry, much of it published by his own small press, Albion Village Press. He was (and remains) closely connected with the British avant garde poetry scene of the 1960s and 1970s – authors such as Edward Dorn, J.