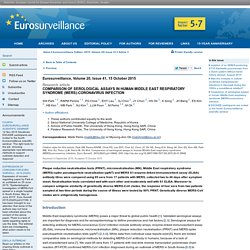 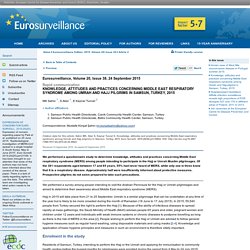 Hajj in 2015 will take place from 21 to 25 September. Enrolment in the study Residents of Samsun, Turkey, intending to perform the Hajj or the Umrah and applying for immunisation to community health centres before the busiest months for pilgrimages were enrolled during the period from 4 May to 24 July 2015. Survey participants. EUROSURVEILLANCE 09/07/15 Assessing the risk of observing multiple generations of Middle East respiratory syndrome (MERS) cases given an imported case. To guide risk assessment, expected numbers of cases and generations were estimated, assuming a case importation of Middle East respiratory syndrome (MERS). 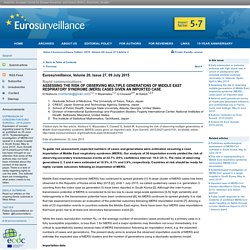 Our analysis of 36 importation events yielded the risk of observing secondary transmission events at 22.7% (95% confidence interval: 19.3–25.1). The risks of observing generations 2, 3 and 4 were estimated at 10.5%, 6.1% and 3.9%, respectively. EUROSURVEILLANCE 12/12/13 Au sommaire: Middle East Respiratory Syndrome coronavirus (MERS-CoV) serology in major livestock species in an affected region in Jordan, June to September 2013. Between June and September 2013, sera from 11 dromedary camels, 150 goats, 126 sheep and 91 cows were collected in Jordan, where the first human Middle-East respiratory syndrome (MERS) cluster appeared in 2012. 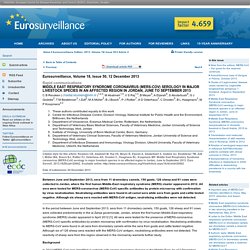 All sera were tested for MERS-coronavirus (MERS-CoV) specific antibodies by protein microarray with confirmation by virus neutralisation. Neutralising antibodies were found in all camel sera while sera from goats and cattle tested negative. Although six sheep sera reacted with MERS-CoV antigen, neutralising antibodies were not detected. Eurosurveillance, Volume 19, Issue 23, 12 June 2014 Assessment of the Middle East respiratory syndrome coronavirus (MERS-CoV) epidemic in the Middle East and risk of international spread using a novel maximum likelihood analysis approach . The emergence of the novel Middle East (ME) respiratory syndrome coronavirus (MERS-CoV) has raised global public health concerns regarding the current situation and its future evolution. 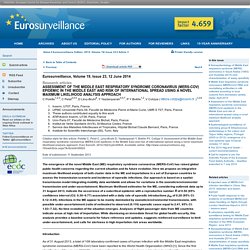 Here we propose an integrative maximum likelihood analysis of both cluster data in the ME and importations in a set of European countries to assess the transmission scenario and incidence of sporadic infections. Our approach is based on a spatial-transmission model integrating mobility data worldwide and allows for variations in the zoonotic/environmental transmission and under-ascertainment. Maximum likelihood estimates for the ME, considering outbreak data up to 31 August 2013, indicate the occurrence of a subcritical epidemic with a reproductive number R of 0.50 (95% confidence interval (CI): 0.30–0.77) associated with a daily rate of sporadic introductions psp of 0.28 (95% CI: 0.12–0.85). Introduction Methods Table 1. Where O is the observed size of the cluster, S its real size Figure 1. Results. EUROSURVEILLANCE 18/06/15 Imported case of MERS-CoV infection identified in China, May 2015: detection and lesson learned.

At the end of May 2015, an imported case of Middle East respiratory syndrome coronavirus (MERS-CoV) infection was confirmed in China. 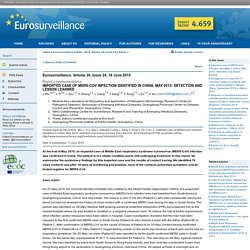 The patient is in a stable condition and is still undergoing treatment. In this report, we summarise the preliminary findings for this imported case and the results of contact tracing. We identified 78 close contacts and after 14 days of monitoring and isolation, none of the contacts presented symptoms and all tested negative for MERS-CoV. Case report On 27 May 2015, the Chinese Ministry of Health was notified by the World Health Organization (WHO) of a suspected case of Middle East respiratory syndrome coronavirus (MERS-CoV) infection who had travelled from South Korea to Guangdong province, China, one day earlier. The case is a man in his 40s (Patient C) who was symptomatic during his travel but had not revealed his history of close contact with a confirmed MERS case during his stay in South Korea. Figure. Laboratory findings Table. EUROSURVEILLANCE 07/05/15 Public health response to two incidents of confirmed MERS-CoV cases travelling on flights through London Heathrow Airport in 2014 – lessons learnt.

In May 2014, Public Health England was alerted to two separate laboratory-confirmed cases of Middle East respiratory syndrome coronavirus (MERS-CoV) infection who transited through London Heathrow Airport while symptomatic on flights from Saudi Arabia to the United States of America. 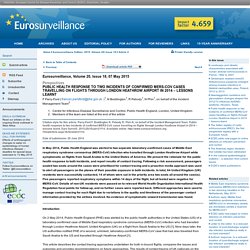 We present the rationale for the public health response to both incidents, and report results of contact tracing. Following a risk assessment, passengers seated two seats around the cases were prioritised for contact tracing and a proactive media approach was used to alert all passengers on the planes of their possible exposure in both incidents. EUROSURVEILLANCE 27/09/12 Detection of a novel human coronavirus by real-time reverse-transcription polymerase chain reaction. We present two real-time reverse-transcription polymerase chain reaction assays for a novel human coronavirus (CoV), targeting regions upstream of the E gene (upE) or within open reading frame (ORF)1b, respectively. 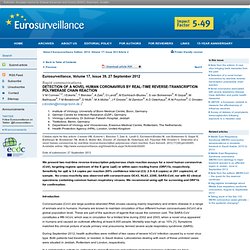 Sensitivity for upE is 3.4 copies per reaction (95% confidence interval (CI): 2.5–6.9 copies) or 291 copies/mL of sample. No cross-reactivity was observed with coronaviruses OC43, NL63, 229E, SARS-CoV, nor with 92 clinical specimens containing common human respiratory viruses. We recommend using upE for screening and ORF1b for confirmation. Introduction Coronaviruses (CoV) are large positive-stranded RNA viruses causing mainly respiratory and enteric disease in a range of animals and in humans. During September 2012, health authorities were notified of two cases of severe hCoV infection caused by a novel virus type. Materials and methods RNA extraction RNA was extracted from the samples as described earlier [2] by using a viral RNA mini kit (Qiagen). Results Figure 1. Eurosurveillance, Volume 18, Issue 11, 14 March 2013Evidence of person-to-person transmission within a family cluster of novel c. In February 2013, novel coronavirus (nCoV) infection was diagnosed in an adult male in the United Kingdom with severe respiratory illness, who had travelled to Pakistan and Saudi Arabia 10 days before symptom onset. 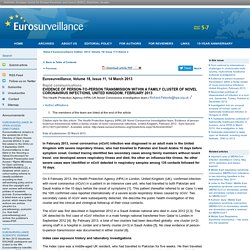 Contact tracing identified two secondary cases among family members without recent travel: one developed severe respiratory illness and died, the other an influenza-like illness. No other severe cases were identified or nCoV detected in respiratory samples among 135 contacts followed for 10 days. On 8 February 2013, the Health Protection Agency (HPA) in London, United Kingdom (UK), confirmed infection with novel coronavirus (nCoV) in a patient in an intensive care unit, who had travelled to both Pakistan and Saudi Arabia in the 10 days before the onset of symptoms [1]. This patient (hereafter referred to as Case 1) was the 10th confirmed case reported internationally of a severe acute respiratory illness caused by nCoV. 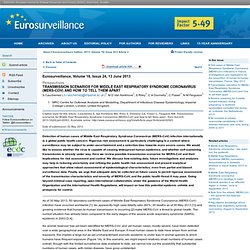 Rigorous risk assessment is particularly challenging in a context where surveillance may be subject to under-ascertainment and a selection bias towards more severe cases. We would like to assess whether the virus is capable of causing widespread human epidemics, and whether self-sustaining transmission is already under way. Here we review possible transmission scenarios for MERS-CoV and their implications for risk assessment and control.

Contact tracing identified a secondary case in a patient hospitalised in the same hospital room. No other cases of MERS-CoV infection were identified among the index case’s 123 contacts, nor among 39 contacts of the secondary case, during the 10-day follow-up period. On 7 May 2013, Middle East Respiratory syndrome-Coronavirus (MERS-CoV) infection was confirmed in France in a traveller who became ill after returning from the United Arab Emirates (index case). An investigation was immediately carried out among his contacts since onset of illness, as well as among individuals who had co-travelled with him to the United Arab Emirates.

The aim of the investigation was to detect possible other cases and prevent human-to-human transmission. Figure. Control measures References.