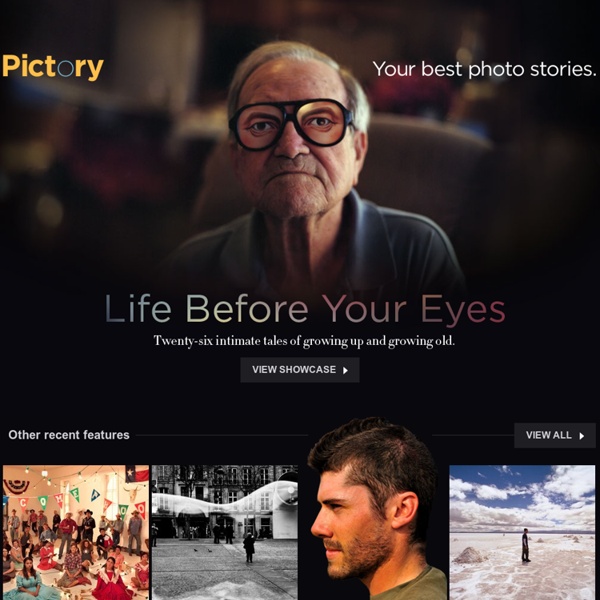 Online screening: Journey To The End Of Coal A project powered by Klynt Editing & publishing app. Journey To The End Of Coal tells you the story of a sacrifice. A sacrifice millions of Chinese coal miners are making everyday, risking their lives and spoiling their land to satisfy their own country’s appetite for economic growth. Features « Paper Journal Features Martin Kollar – Nothing Special Pierre Le Hors Curtis Hamilton: Taken as Given Xavier Ribas – Sundays, 1994–1997 Algorithm-Powered Movie whiteonwhite:algorithmicnoir Computes at Sundance A scene from the computer-powered film whiteonwhite:algorithmicnoir. PARK CITY, Utah — It’s never the same movie twice. [bug id="sundance"]Eve Sussman’s experimental cinema project whiteonwhite:algorithmicnoir uses a computer to build a movie out of 3,000 video clips, 80 voiceovers and 150 pieces of music. Though it makes choices in largely random fashion, the computer is surprisingly adept at editing together a pretty good movie.

Contemporary Photography I made this series with the desire to build a set of symbolic portraits inspired by my background of double cultures. I'm French with Middle Eastern origins. I worked by using the pictorial tradition of still lives. I chose to put forward characters where the nature and objects they carry come from different rites and customs. The photographs can be grouped into three metaphorical categories: Firstly the "mark", with elements of uncultivated land, evocative death and rebirth. 4 Inspiring Examples of Digital Storytelling Layla Revis is vice president of digital influence at Ogilvy PR Worldwide. Her specialties include international affairs, tourism and multicultural marketing. In 2011, Sundance Film Festival created The New Frontier Story Lab, an initiative created to foster the development of a new style of media production.

i’m jealous of twin-niwt i’m jealous of twin-niwt Ok, before the love, I have to start by saying that tumblr ain’t my favorite thing in the world. It just seems to be a giant sea of images that rarely link back to the artist who made the work. That drives me nuts! The Miracle Mile Paradox ARG by Transmedia LA Rexford Higgs, in the video above, is just one of many characters with which you will be able to interact as if they were real people in The Miracle Mile Paradox, an alternate reality game (ARG) set in a historic neighborhood of Los Angeles. The game will run for 14 weeks this summer and will be playable both online and in real life for free! It's simple! Égarements by Cerise Doucède With application, precision and humour, photographer Cerise Doucède created the series ‘Égarements’ (aberration) consisting of installations which represents each of our dreams and obsession or even fears. By shaping her own visions, she reproduces her version of reality and sublimates the most ordinary moments. Objects thus come to life around one or more figures, in intimate locations, at key moments of everyday life.

Playing With the Monster: How to Build a Successful Trans-media Project Rating: 5.0/5 (1 vote cast) Art of Crime developed a total cross-media strategy from scratch AND designed the whole platform for a trans-media expansion BEFORE launch. Their test launch last year showed a unique potential, and the Scandinavian MMO launch this summer has proven it is scalable now with over 80 thousand Crimevillains and hundreds joining every day. Michael Tittel: Behavior This week we are sharing work submitted to Lenscratch… It does not happen often, but every now and then I will catch someone sneaking a candid of me in public. It is the photographer in me that relates to the strides taken for the perfect image, and because of this I always pretend I cannot see them. I shake their presence off in hopes that I embodied what they needed, that in some way I managed to help them in their quest for a perfect image.

Secret Location Combines Gaming, Interactivity, and Telephony With Mysterious Film "The Sevens" When visiting the website of a creative company, the expectation is to find some contact information and selections of work and/or a demonstration of just how desperately social-media-savvy the proprietors are. When you visit the site of Secret Location and a phone starts ringing, however, you know something altogether different is going on. Clicking on the persistently ringing phone initiates a multi-layered narrative experience that seamless combines short film, interactivity, and gaming.

AT&T and BBDO Launch Mega-Media Storytelling with Daybreak branded entertainment Posted by Mark J. Miller on June 8, 2012 04:38 PM Plenty of people are happy just sitting through a television show, zipping through its commercials via DVR, and soaking in the passive experience. But plenty are looking to be a little more involved in their entertainment and AT&T is taking the first steps to get them there. The brand just launched an action-adventure drama entitled Daybreak as a tale told through five online films, two websites, and, of course, a smartphone app. Photography by Gabriela Minks Gabriela Minks is a talented 22 years old semi-professional photographer based in Florianópolis, Brazil.