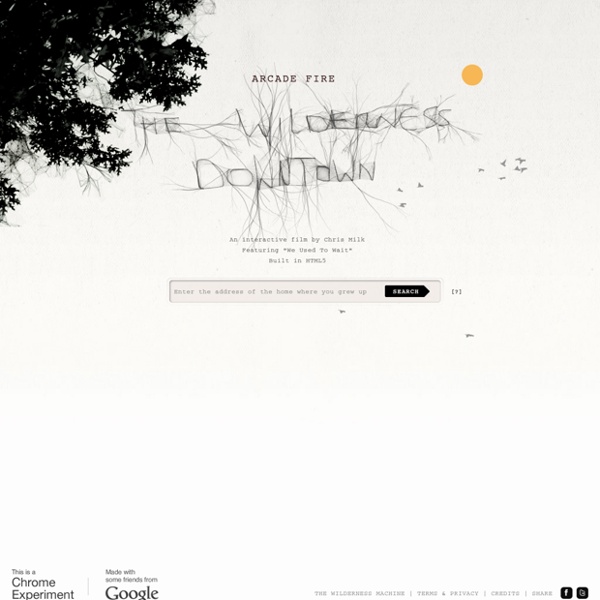 Google RO.ME › North Kingdom In the simplest of terms explaining it – “3 Dreams of Black” is an interactive music video developed in WebGL and optimized for Chrome to showcase its possibilities; written and directed by Chris Milk; based on the song “Black” from Danger Mouse and Daniele Luppi’s ROME album; an album that somewhat is a soundtrack to a movie that doesn’t exist. The music serves to express a story that takes place in a post-apocalyptic landscape where the main characters are played through the voices of Norah Jones and Jack White. More specifically, “3 Dreams of Black” is Norah’s lucid dream where users can partake and gain control of her characters experience. Together with Chris Milk and Google Creative Lab we took on the role to lead the development across disciplines and serve as one unifying hub to tell the story of ”3 Dreams of Black”.

Museum of Fine Arts in Boston opens new Art of the Americas Wing Exterior improvements continue at the museum — part of its ongoing efforts to embrace the Frederick Law Olmsted-designed Back Bay Fens, surround the building with greenery, and in so doing, help to rejuvenate the museum's neighborhood. When Typography Speaks Louder Than Words Advertisement Clever graphic designers love to use typography to explore the interaction between the look of type and what type actually says. In communicating a message, a balance has to be achieved between the visual and the verbal aspects of a design.

The Rubik's Cube Solution How to Solve the Rubik's Cube in Seven Steps The world's most famous puzzle, simultaneously beloved and despised for it's beautiful simple complexity, the Rubiks Cube has been frustrating gamers since Erno Rubik invented it back in 1974. Over the years many brave gamers have whole-heartedly taken up the challenge to restore a mixed Rubik's cube to it's colorful and perfect original configuration, only to find the solution lingering just out of their grasp time and time again. Online screening: Journey To The End Of Coal A project powered by Klynt Editing & publishing app. Journey To The End Of Coal tells you the story of a sacrifice. A sacrifice millions of Chinese coal miners are making everyday, risking their lives and spoiling their land to satisfy their own country’s appetite for economic growth. Your journey begins in Datong which is located just a couple hours away West from Beijing. You travel from there all around the region and visit its major coal mines, from the “best” state-owned complex to the worst private coal plants.

online paint program Flame Painter is a unique paint program, it belongs to my 'I am an Artist' experimental project. I think with tools which inspires you, everyone can be an artist. You can try it here, change different brush settings and paint your own flame paintings. When you change the background from black to white, the palette changes from additive to subtractive and the feeling of the painting is very different. It's not easy to explain all brush parameters, so I leave this for your experimentation. Check out new Rebelle - the real watercolor and acrylic paint program, Amberlight - abstract art tool based on particles, or Fluidance motion effect program.

23 Amazing Single Page Websites When a website doesn’t call for a lot of content, it might be a good idea to go with the single page approach – where all of the content lives on the home page and the navigation, in most cases, allows the user to jump from one section to another. In the past few years, we’ve seen a steady increase in popularity of these types of sites, mainly partly because the use of jQuery can make for some nifty transitions and effects. For you’re inspiration, we gathered some really nice examples of websites that use only one page to show all their content. Picture of the Day: A Tiny River House in Serbia «TwistedSifter Oct 17, 2012 My friend Dan G. emailed me this wonderful photograph by Irene Becker that shows a tiny house in the middle of the Drina River near the town of Bajina Basta, Serbia. The capture was highlighted by National Geographic as one of the best ‘Photos of the Day‘ for the month of August 2012. The Drina is a 346 km long river that forms much of the border between Bosnia and Herzegovina and Serbia. It is the longest tributary of the Sava River and the longest karst river in the Dinaric Alps. [Source]