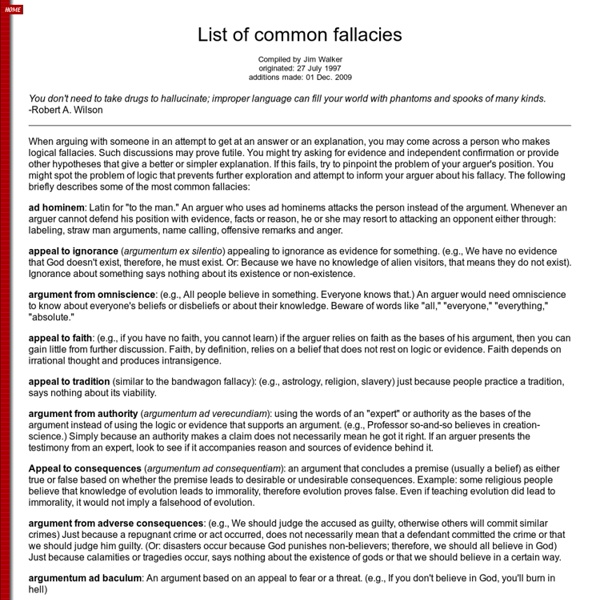 List of common fallacies Compiled by Jim Walker originated: 27 July 1997 additions made: 01 Dec. 2009 You don't need to take drugs to hallucinate; improper language can fill your world with phantoms and spooks of many kinds. -Robert A. Wilson When arguing with someone in an attempt to get at an answer or an explanation, you may come across a person who makes logical fallacies. Such discussions may prove futile. You might try asking for evidence and independent confirmation or provide other hypotheses that give a better or simpler explanation. If this fails, try to pinpoint the problem of your arguer's position. William D. Audio file: Monica Victor (monicavictor82@gmail.com) made an audio file of the above article for people who have visual impairments or for those who prefer to listen through their mp3 players rather than read.

Gödel's Incompleteness: The #1 Mathematical Breakthrough of the 20th Century In 1931, Kurt Gödel delivered a devastating blow to the mathematicians of his time In 1931, the young mathematician Kurt Gödel made a landmark discovery, as powerful as anything Albert Einstein developed. In one salvo, he completely demolished an entire class of scientific theories. Why People "Fly from Facts" “There was a scientific study that showed vaccines cause autism.” “Actually, the researcher in that study lost his medical license, and overwhelming research since then has shown no link between vaccines and autism.” “Well, regardless, it’s still my personal right as a parent to make decisions for my child.” Does that exchange sound familiar: a debate that starts with testable factual statements, but then, when the truth becomes inconvenient, the person takes a flight from facts. As public debate rages about issues like immunization, Obamacare, and same-sex marriage, many people try to use science to bolster their arguments. And since it’s becoming easier to test and establish facts—whether in physics, psychology, or policy—many have wondered why bias and polarization have not been defeated.

The Many Worlds of Logic - Classic Logical Arguments: The Determinist Argument © 2011 By Paul Herrick You have a mind and you have a brain. What is the relationship between the mind and the brain? Is the brain one thing while the mind is another thing entirely? A List Of Fallacious Arguments attacking the person instead of attacking his argument. For example, "Von Daniken's books about ancient astronauts are worthless because he is a convicted forger and embezzler." (Which is true, but that's not why they're worthless.) Another example is this syllogism, which alludes to Alan Turing's homosexuality:

Whataboutism While Whataboutism has long served as a tool for Soviet (and now Russian) propagandists, it has now become entrenched in American political discourse. It is, as noted by comedian John Oliver, a beloved tool of Fox News and President Trump. Whataboutism is a variant of the classic ad hominem tu quoque fallacy. In the standard tu quoque fallacy it is concluded that a person’s claim is false because 1) it is inconsistent with something else a person has said or 2) what a person says is inconsistent with her actions.

Logical Fallacy of Denying the Correlative Conjunction / Denying the Correlative There are 18 sub-topics of "Fallacies of Choice": How can we know anything about anything? That's the real question Logical Fallacy of Denying the Correlative Conjunction / Denying the Correlative Denying the correlative conjunction is one of the many smokescreens that are used to cover the fact that the reasoning is based on one of the three fallacies of Agrippa's trilemma. Whenever a logical fallacy is committed, the fallacy has its roots in Agrippa's trilemma. Perfect solution fallacy by Tim Harding “The perfect is the enemy of the good.” — Voltaire “Nobody made a greater mistake than he who did nothing because he could do only a little.” – Edmund Burke The Perfect Solution Fallacy (also known as the ‘Nirvana Fallacy‘) is a false dichotomy that occurs when an argument assumes that a perfect solution to a problem exists and/or that a proposed solution should be rejected because some part of the problem would still exist after it were implemented.

the bullet hole misconception on escaping the present to invent the future this is an extended text version of a talk i gave at voxxed days belgrade in october 2017 and a sequel to my previous talk, the lost medium. feel free to share it and if you have a question, feedback or critique i'd love to hear from you! Good morning. Logical Fallacy of Argument by Laziness There are 103 sub-topics of "Flawed Evidence": How can we know anything about anything? That's the real question Logical Fallacy of Argument by Laziness Argument by laziness is one of the many smokescreens that are used to cover the fact that the reasoning is based on one of the three fallacies of Agrippa's trilemma.

Logical Fallacies and the Art of Debate Contents: Introduction This is a guide to using logical fallacies in debate. And when I say "using," I don't mean just pointing them out when opposing debaters commit them -- I mean deliberately committing them oneself, or finding ways to transform fallacious arguments into perfectly good ones. Debate is, fortunately or not, an exercise in persuasion, wit, and rhetoric, not just logic. In a debate format that limits each debater's speaking time, it is simply not reasonable to expect every proposition or conclusion to follow precisely and rigorously from a clear set of premises stated at the outset. The Adventures of Fallacy Man The Adventures of Fallacy Man It's a good thing Fallacy Man didn't think of responding with 'Fallacy Fallacy' back, or they would have gotten into an infinite regress of logic and reason Permanent Link to this Comic: Support the comic on Patreon

Truth Based Living Does Spock’s logic affirm the Cosmological Argument? One of my favorite television shows growing up was Star Trek, and as a lifelong Trekkie/Trekker (whichever moniker you prefer), I mourn the loss of Leonard Nimoy. Like many, I’ve spent the last week reflecting on Nimoy’s life and legacy, and the inspiration he was to many over the years. I’ve also appreciated the many Leonard Nimoy quotes that have been bandied about the Internet these last several days – some of them from Leonard Nimoy himself and some from his best-known and most beloved character, Mr. Spock from Star Trek. Among the quotes that I particularly like is one stolen from Sir Arthur Conan Doyle’s Sherlock Holmes…