Taxonomy of the Logical Fallacies 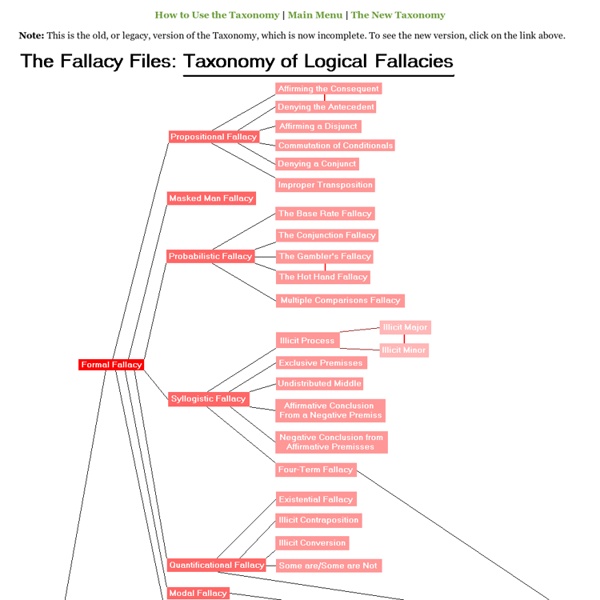 How to Use the Taxonomy | Main Menu Acknowledgments: Thanks to David Goodey and Kent Gustavsson for pointing out missing links.

Whataboutism While Whataboutism has long served as a tool for Soviet (and now Russian) propagandists, it has now become entrenched in American political discourse. It is, as noted by comedian John Oliver, a beloved tool of Fox News and President Trump. Whataboutism is a variant of the classic ad hominem tu quoque fallacy. In the standard tu quoque fallacy it is concluded that a person’s claim is false because 1) it is inconsistent with something else a person has said or 2) what a person says is inconsistent with her actions. This type of “argument” has the following form:

St. Petersburg College Critical Thinking Gateway Three settings are conducive for critical thinking games: classroom, online, and outdoors (e.g., leadership development activities): Simulations provide realistic or semi-realistic opportunities for students to practice skills and solve problems in safe environments. They differ from structured experiential activities by their multi-part and branching nature. A typical simulation will provide an opening scenario that requires students to engage in a planning activity. In a second round, the student or group must use the skills or theories from the course to make a decision regarding a significant problem.

Praise versus Encouragement Most of us believe that we need to praise our children more. However, there is some controversy regarding this point. If we always reward a child with praise after a task is completed, then the child comes to expect it. The Selective Laziness Of Human Reasoning : 13.7: Cosmos And Culture Gary Waters/Getty Images/Ikon Images Democrat: "Those arguments by Republicans are preposterous!" Republican: "Those arguments by Democrats are absurd!" Sound familiar? There are plenty of reasons why political disputes can be divisive, and a host of psychological mechanisms that contribute to a preference for one's own views.

the bullet hole misconception on escaping the present to invent the future this is an extended text version of a talk i gave at voxxed days belgrade in october 2017 and a sequel to my previous talk, the lost medium. feel free to share it and if you have a question, feedback or critique i'd love to hear from you! Good morning. When I flew over to give this talk, I wasn't worried about my plane falling out of the sky, not even after several high-profile plane crashes in recent months and years.

Critical thinking On The Web Top Ten Argument Mapping Tutorials. Six online tutorials in argument mapping, a core requirement for advanced critical thinking.The Skeptic's Dictionary - over 400 definitions and essays. How 30 Minutes a Day Can Increase Your Intelligence If you ask me, where humans go wrong is with their lack of patience. That, and their recent acquired taste for instant gratification. The reality is that things take time. Richard Branson didn’t become a millionaire overnight.

What If Consciousness Comes First? Source: ColiN00B/Pixabay Despite the success of neuroscience in establishing a wide range of correlations between brain processes and conscious experience, there is at least one question about the relationship between the brain and consciousness that continues to appear unanswerable, even in principle. This is the question of why we have conscious experience at all. article continues after advertisement The problem is that there could conceivably be brains that perform all the same sensory and decision-making functions as ours but in which there is no conscious experience. That is, there could be brains that react as though sad but that don’t feel sadness, brains that can discriminate between wavelengths of light but that don’t see red or yellow or blue or any other color, brains that direct their bodies to eat certain foods but that don’t taste them.