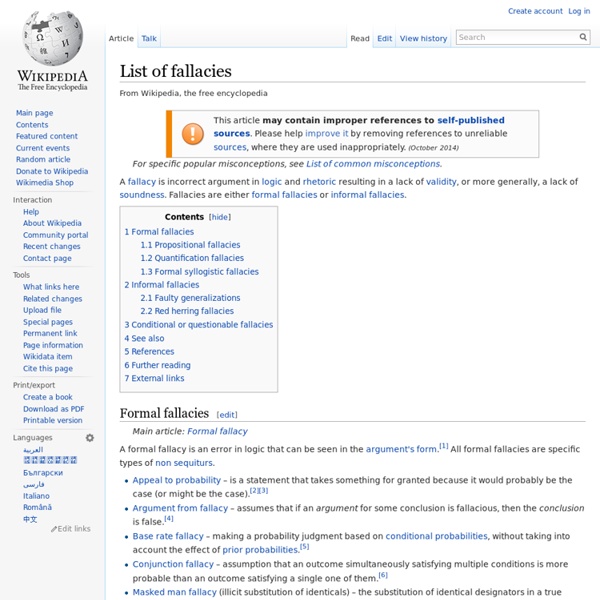 A fallacy is incorrect argument in logic and rhetoric resulting in a lack of validity, or more generally, a lack of soundness. Fallacies are either formal fallacies or informal fallacies. Formal fallacies[edit] Main article: Formal fallacy Appeal to probability – is a statement that takes something for granted because it would probably be the case (or might be the case).[2][3]Argument from fallacy – assumes that if an argument for some conclusion is fallacious, then the conclusion is false.Base rate fallacy – making a probability judgment based on conditional probabilities, without taking into account the effect of prior probabilities.[5]Conjunction fallacy – assumption that an outcome simultaneously satisfying multiple conditions is more probable than an outcome satisfying a single one of them.[6]Masked man fallacy (illicit substitution of identicals) – the substitution of identical designators in a true statement can lead to a false one. Propositional fallacies[edit]

List of memory biases In psychology and cognitive science, a memory bias is a cognitive bias that either enhances or impairs the recall of a memory (either the chances that the memory will be recalled at all, or the amount of time it takes for it to be recalled, or both), or that alters the content of a reported memory. There are many different types of memory biases, including: See also[edit] [edit] ^ Jump up to: a b c d e Schacter, Daniel L. (1999). 50 Questions To Help Students Think About What They Think click 2x contributed by Lisa Chesser Using the right questions creates powerful, sometimes multiple answers and discussions. Aristotle said that he asked questions in response to other people’s views, while Socrates focused on disciplined questioning to get to the truth of the matter. Ultimately questions spark imagination, conjure emotions, and create more questions. The questions asked by a teacher or professor are sometimes more glaringly valuable than the information transferred to the students.

SCHOPENHAUER'S 38 STRATAGEMS, OR 38 WAYS TO WIN AN ARGUMENT Arthur Schopenhauer (1788-1860), was a brilliant German philosopher. These 38 Stratagems are excerpts from "The Art of Controversy", first translated into English and published in 1896. Carry your opponent's proposition beyond its natural limits; exaggerate it. The more general your opponent's statement becomes, the more objections you can find against it. The more restricted and narrow his or her propositions remain, the easier they are to defend by him or her. Fallacies Dr. Michael C. Labossiere, the author of a Macintosh tutorial named Fallacy Tutorial Pro 3.0, has kindly agreed to allow the text of his work to appear on the Nizkor site, as a Nizkor Feature. It remains © Copyright 1995 Michael C. Labossiere, with distribution restrictions -- please see our copyright notice. If you have questions or comments about this work, please direct them both to the Nizkor webmasters (webmaster@nizkor.org) and to Dr.

List of common misconceptions From Wikipedia, the free encyclopedia This incomplete list is not intended to be exhaustive. This list corrects erroneous beliefs that are currently widely held about notable topics. Technological Singularity The technological singularity is the hypothesis that accelerating progress in technologies will cause a runaway effect wherein artificial intelligence will exceed human intellectual capacity and control, thus radically changing civilization in an event called the singularity.[1] Because the capabilities of such an intelligence may be impossible for a human to comprehend, the technological singularity is an occurrence beyond which events may become unpredictable, unfavorable, or even unfathomable.[2] The first use of the term "singularity" in this context was by mathematician John von Neumann. Proponents of the singularity typically postulate an "intelligence explosion",[5][6] where superintelligences design successive generations of increasingly powerful minds, that might occur very quickly and might not stop until the agent's cognitive abilities greatly surpass that of any human. Basic concepts Superintelligence Non-AI singularity

How to improve your Critical Thinking skills: Interview with Dr. Gerald Nosich – Life Lessons In this article I interview an expert on Critical Thinking, Dr. Gerald Nosich from the Foundation for Critical Thinking, who has been teaching Critical Thinking since 1977 to find out how we can improve our Critical Thinking skills. In this article you will learn: Fallacy A fallacy is the use of poor, or invalid, reasoning for the construction of an argument.[1][2] A fallacious argument may be deceptive by appearing to be better than it really is. Some fallacies are committed intentionally to manipulate or persuade by deception, while others are committed unintentionally due to carelessness or ignorance. Fallacies are commonly divided into "formal" and "informal". A formal fallacy can be expressed neatly in a standard system of logic, such as propositional logic,[1] while an informal fallacy originates in an error in reasoning other than an improper logical form.[3] Arguments containing informal fallacies may be formally valid, but still fallacious.[4] Formal fallacy[edit] Main article: Formal fallacy

Top 20 Logical Fallacies - The Skeptics' Guide to the Universe Introduction to Argument Structure of a Logical Argument Whether we are consciously aware of it or not, our arguments all follow a certain basic structure. They begin with one or more premises, which are facts that the argument takes for granted as the starting point. Then a principle of logic is applied in order to come to a conclusion. This structure is often illustrated symbolically with the following example: List of cognitive biases Systematic patterns of deviation from norm or rationality in judgment The loss aversion cognitive bias has been shown in monkeys Cognitive biases are systematic patterns of deviation from norm and/or rationality in judgment. They are often studied in psychology and behavioral economics.[1] Although the reality of most of these biases is confirmed by reproducible research,[2][3] there are often controversies about how to classify these biases or how to explain them.[4] Gerd Gigerenzer has criticized the framing of cognitive biases as errors in judgment, and favors interpreting them as arising from rational deviations from logical thought.[5]

Moore's law Moore's law is the observation that, over the history of computing hardware, the number of transistors on integrated circuits doubles approximately every two years. The law is named after Intel co-founder Gordon E. Moore, who described the trend in his 1965 paper.[1][2][3] His prediction has proven to be accurate, in part because the law is now used in the semiconductor industry to guide long-term planning and to set targets for research and development.[4] The capabilities of many digital electronic devices are strongly linked to Moore's law: processing speed, memory capacity, sensors and even the number and size of pixels in digital cameras.[5] All of these are improving at roughly exponential rates as well.

Oh, fallacies! The only thing more common than sarcasm on the internet! by mobyduck Jul 12