Self-Deception I: Rationalization. In this new series I shall be examining some of the most important methods of self-deception , starting today with the ego defence of rationalization. 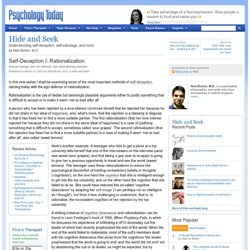 Rationalization is the use of feeble but seemingly plausible arguments either to justify something that is difficult to accept or to make it seem ‘not so bad after all'. A person who has been rejected by a love interest convinces herself that he rejected her because he did not share in her ideal of happiness , and, what's more, that the rejection is a blessing in disguise in that it has freed her to find a more suitable partner. The first rationalization (that her love interest rejected her because they did not share in the same ideal of happiness) is a case of justifying something that is difficult to accept, sometimes called ‘sour grapes'.

The second rationalization (that the rejection has freed her to find a more suitable partner) is a case of making it seem ‘not so bad after all', also called ‘sweet lemons'. Here's another example. Editing Reality. In September 2007, the British press reported on an unusually macabre story. 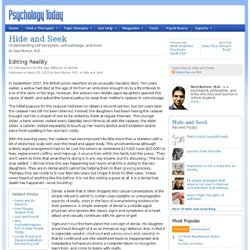 Ten years earlier, a widow had died at the age of 84 from an embolism brought on by a thrombosis in one of the veins in her legs. However, the widow's two middle-aged daughters queried this cause of death, and asked the funeral parlour to keep their mother's cadaver in cold storage. The initial purpose for this request had been to obtain a second opinion, but ten years later the cadaver had still not been interred. Instead, the daughters had been having the cadaver brought out into a chapel of rest to be visited by them at regular intervals.

The younger sister, a bank worker, visited every Saturday lunch-time to sit with the cadaver; the elder sister, a caterer, visited separately to touch up her mum's lipstick and foundation and to place fresh padding in her stomach cavity. Sigmund Freud first formulated the concept of denial. Adapted from my new book, Pareidolia. A satellite photo of a mesa in Cydonia, often called the Face on Mars. 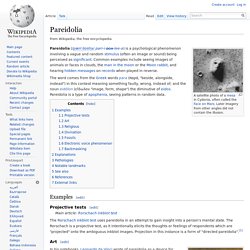 Later imagery from other angles did not contain the illusion. Examples[edit] Projective tests[edit] The Rorschach inkblot test uses pareidolia in an attempt to gain insight into a person's mental state. The Rorschach is a projective test, as it intentionally elicits the thoughts or feelings of respondents which are "projected" onto the ambiguous inkblot images.

Art[edit] In his notebooks, Leonardo da Vinci wrote of pareidolia as a device for painters, writing "if you look at any walls spotted with various stains or with a mixture of different kinds of stones, if you are about to invent some scene you will be able to see in it a resemblance to various different landscapes adorned with mountains, rivers, rocks, trees, plains, wide valleys, and various groups of hills. Religious[edit] Divination[edit] Various European ancient divination practices involve the interpretation of shadows cast by objects. Apophenia. Apophenia /æpɵˈfiːniə/ is the experience of perceiving patterns or connections in random or meaningless data. 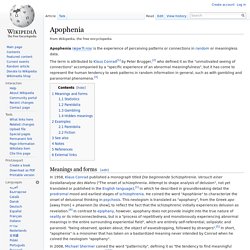 The term is attributed to Klaus Conrad[1] by Peter Brugger,[2] who defined it as the "unmotivated seeing of connections" accompanied by a "specific experience of an abnormal meaningfulness", but it has come to represent the human tendency to seek patterns in random information in general, such as with gambling and paranormal phenomena.[3] Meanings and forms[edit] In 2008, Michael Shermer coined the word "patternicity", defining it as "the tendency to find meaningful patterns in meaningless noise".[6][7] In The Believing Brain (2011), Shermer says that we have "the tendency to infuse patterns with meaning, intention, and agency", which Shermer calls "agenticity".[8] Statistics[edit] Pareidolia[edit] Pareidolia is a type of apophenia involving the perception of images or sounds in random stimuli, for example, hearing a ringing phone while taking a shower.

50 Common Cognitive Distortions. 3. Negative predictions. Overestimating the likelihood that an action will have a negative outcome. 4. Underestimating coping ability. Underestimating your ability cope with negative events. 5. Thinking of unpleasant events as catastrophes. 6. For example, during social interactions, paying attention to someone yawning but not paying the same degree of attention to other cues that suggest they are interested in what you’re saying (such as them leaning in). 7. Remembering negatives from a social situation and not remembering positives. 8. Believing an absence of a smiley-face in an email means someone is mad at you. 9.

The belief that achieving unrelentingly high standards is necessary to avoid a catastrophe. 10. Believing the same rules that apply to others should not apply to you. 11. For example, I’ve made progress toward my goal and therefore it’s ok if I act in a way that is inconsistent with it. 12. For example, believing that poor people must deserve to be poor. 13. 14.