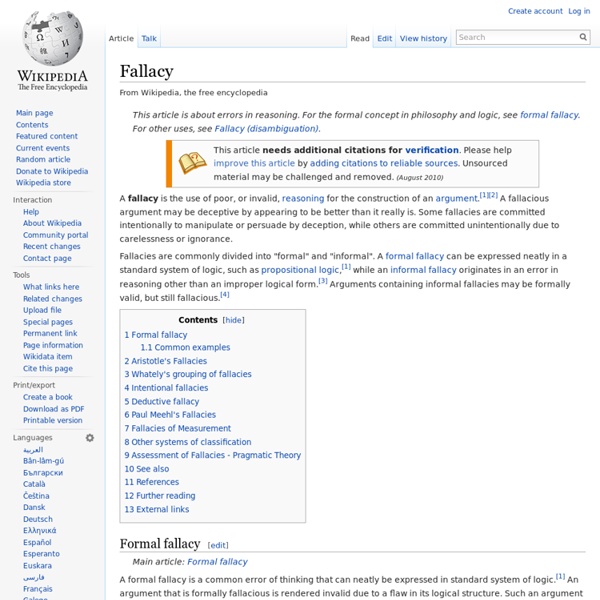 A fallacy is the use of poor, or invalid, reasoning for the construction of an argument.[1][2] A fallacious argument may be deceptive by appearing to be better than it really is. Some fallacies are committed intentionally to manipulate or persuade by deception, while others are committed unintentionally due to carelessness or ignorance. Fallacies are commonly divided into "formal" and "informal". A formal fallacy can be expressed neatly in a standard system of logic, such as propositional logic,[1] while an informal fallacy originates in an error in reasoning other than an improper logical form.[3] Arguments containing informal fallacies may be formally valid, but still fallacious.[4] Formal fallacy[edit] Main article: Formal fallacy A formal fallacy is a common error of thinking that can neatly be expressed in standard system of logic.[1] An argument that is formally fallacious is rendered invalid due to a flaw in its logical structure. Common examples[edit] Aristotle's Fallacies[edit]

Cognitive distortion Exaggerated or irrational thought pattern Challenging and changing cognitive distortions is a key element of cognitive behavioral therapy (CBT). Definition[edit] Cognitive comes from the Medieval Latin cognitīvus, equivalent to Latin cognit(us), 'known'.[4] Distortion means the act of twisting or altering something out of its true, natural, or original state.[5] History[edit] In 1957, American psychologist Albert Ellis, though he did not know it yet, would aid cognitive therapy in correcting cognitive distortions and indirectly helping David D. Beck's student David D. Main types[edit] Examples of some common cognitive distortions seen in depressed and anxious individuals. John C. All-or-nothing thinking[edit] The "all-or-nothing thinking distortion" is also referred to as “splitting,”[19] “black-and-white thinking,"[2] and "polarized thinking Example (from The Feeling Good Handbook): A woman eats a spoonful of ice cream. Jumping to conclusions[edit] Mind reading[edit] Fortune-telling[edit]

Logical Fallacies 6 Brainwashing Techniques They're Using On You Right Now Brainwashing doesn't take any sci-fi gadgetry or Manchurian Candidate hypnotism bullshit. There are all sorts of tried-and-true techniques that anyone can use to bypass the thinking part of your brain and flip a switch deep inside that says "OBEY." Now I know what you're thinking. "Sure, just make an ad with some big ol' titties on there! That'll convince people!" While that's certainly true ... ... they've got a whole arsenal of manipulation techniques that go way beyond even the most effective of titties. Every cult leader, drill sergeant, self-help guru and politician knows that if you want to quiet all of those pesky doubting thoughts in a crowd, get them to chant a repetitive phrase or slogan. Sounds like: "Say it with me now, folks!" "One, two, three, four, I, Love, The Marine, Corps. Why It Works: The "Analytical" part of your brain and the "Repetitive Task" part tend to operate in separate rooms. Meditation works the same way, with chants or mantras meant to "calm the mind."

What are the Fallacy Files? I began collecting and studying logical fallacies about twenty-five years ago, when I first became interested in logic. This collection took two forms: A collection of named fallacies—such as "ad hominem"—that is, types of bad reasoning which someone has thought distinctive and interesting enough to name and describe. This collection took the form, primarily, of the study and acquisition of books and articles on the named fallacies, especially textbooks and reference books. Some years after I began to amass these files, I wondered just what I ought eventually to do with them, how best to organize the information within them, and in what form to make them available to others interested in fallacy studies. Praise for the Fallacy Files Contribute to the Fallacy Files You can contribute fallacies and examples to the files by sending them to me. Email Policy Any examples sent to The Fallacy Files or questions asked may be used in entries, the weblog, or other features. Advertisement Policy

Naturalistic fallacy In philosophical ethics, the term "naturalistic fallacy" was introduced by British philosopher G. E. Moore in his 1903 book Principia Ethica.[1] Moore argues it would be fallacious to explain that which is good reductively in terms of natural properties such as "pleasant" or "desirable". The naturalistic fallacy is closely related to the fallacious appeal to nature, the claim that what is natural is inherently good or right, and that what is unnatural is inherently bad or wrong. Furthermore, Moore's naturalistic fallacy is closely related to the is–ought problem, which comes from Hume's Treatise. Different common uses[edit] The is–ought problem[edit] The term "naturalistic fallacy" is sometimes used to describe the deduction of an "ought" from an "is" (the Is–ought problem). In using his categorical imperative Kant deduced that experience was necessary for their application. Moore's discussion[edit] The title page of Principia Ethica According to G. Appeal to nature[edit] Criticism[edit]

Fallacies  A fallacy is a kind of error in reasoning. The list of fallacies contains 209 names of the most common fallacies, and it provides brief explanations and examples of each of them. Fallacies should not be persuasive, but they often are. Fallacies may be created unintentionally, or they may be created intentionally in order to deceive other people. An informal fallacy is fallacious because of both its form and its content. The discussion that precedes the long alphabetical list of fallacies begins with an account of the ways in which the term "fallacy" is vague. Table of Contents 1. The first known systematic study of fallacies was due to Aristotle in his De Sophisticis Elenchis (Sophistical Refutations), an appendix to the Topics. The more frequent the error within public discussion and debate the more likely it is to have a name. The term "fallacy" is not a precise term. Real arguments are often embedded within a very long discussion. 2. 3. 4. 5. Fallacy labels have their use. 6. Heap

15 styles of Distorted Thinking 15 styles of Distorted Thinking Filtering: You take the negative details and magnify them while filtering out all positive aspects of a situation. Polarized Thinking: Things are black or white, good or bad. You have to be perfect or you're a failure. There is no middle ground. Checklist for Hidden Anger Procrastination in the completion of imposed tasks. Fallacies Dr. Michael C. Labossiere, the author of a Macintosh tutorial named Fallacy Tutorial Pro 3.0, has kindly agreed to allow the text of his work to appear on the Nizkor site, as a Nizkor Feature. It remains © Copyright 1995 Michael C. Labossiere, with distribution restrictions -- please see our copyright notice. Other sites that list and explain fallacies include: Constructing a Logical Argument Description of Fallacies In order to understand what a fallacy is, one must understand what an argument is. There are two main types of arguments: deductive and inductive. A fallacy is, very generally, an error in reasoning.

Wisdom of repugnance Origin and usage[edit] The term "wisdom of repugnance" was coined in 1997 by Leon Kass, chairman (2001–2005) of the President's Council on Bioethics, in an article in The New Republic,[3] which was later expanded into a further (2001) article in the same magazine,[4] and also incorporated into his 2002 book Life, Liberty, and the Defense of Dignity.[5] Kass stated that disgust was not an argument per se, but went on to say that "in crucial cases...repugnance is the emotional expression of deep wisdom, beyond reason's power fully to articulate it." The term remains largely confined to discussions of bioethics, and is somewhat related to the term "yuck factor". However, unlike the latter, it is used almost exclusively by those who accept its underlying premise; i.e., that repugnance does, in fact, indicate wisdom. It is thus often viewed as loaded language, and is primarily used by certain bioconservatives to justify their position. Criticism[edit] See also[edit] References[edit]