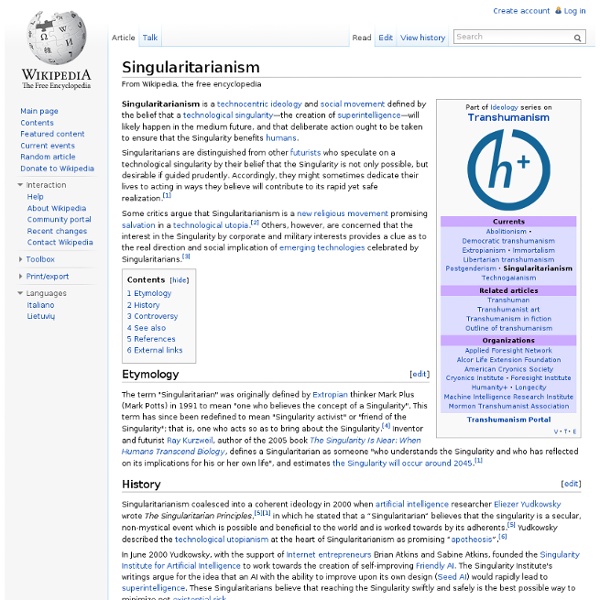 Introducing the Singularity Q: So what is this “Technological Singularity” I keep hearing about? In the broadest sense it refers to “an event or phase brought about by technology that will radically change human civilization, and perhaps even human nature itself before the middle of the 21st century.”1 Think of it as the “tipping point” where the accelerating pace of machines outrun all human capabilities and result in a smarter-than-human intelligence. Q: Seriously? Yes. Q: Sounds like something out of a sci-fi novel… Well the term “technological singularity” was coined by Vernor Vinge, a professor of Mathematics who originally used the term in one of his sci-fi novels. In it, he writes: “Within thirty years, we will have the technological means to create superhuman intelligence. Learn More His use of the term “singularity” stemmed from a mathematical concept where there exists a point at which output is not defined and expected rules break down. Vinge himself thought the Singularity could occur in four ways: 1. “1. 2.

Singularity University’s GSP Class of 2014 Blasts Off to the Future Last week, Singularity University hosted the Closing Ceremony of its 2014 Graduate Studies Program, the pinnacle of an annual program that brought 80 entrepreneurs and visionaries from 35 countries to Silicon Valley for an intense 10-week crash course on exponential technologies and global grand challenges. Now in its sixth year, the event was a celebration of the participants’ commitment to solving the world’s greatest challenges, culminating in 21 team projects sure to produce viable companies that will positively impact a billion people worldwide. I had the opportunity to attend this sold-out event at the Computer History Museum in Mountain View, which showcased the collective talents of the participants along with the dedication of all involved in making this year’s GSP a success. He added, “That’s what makes this institution special. I don’t know of many places in the world where that is the basic, fundamental premise.”

The future of technology will "pale" the previous 20 years Infinity Point Will Arrive by 2035 Latest Eray Ozkural December 23, 2013 During writing a paper for the 100 Year Starship Symposium, I wished to convince the starship designers that they should acknowledge the dynamics of high-technology economy, which may be crucial for interstellar missions. Infinity Point was the original name for the hypothetical event when almost boundless amount of intelligence would be available in Solomonoff's original research in 1985 (1), who is also the founder of mathematical Artificial Intelligence (AI) field. The original theory arrives at the Infinity Point conclusion by making a few simple mathematical assumptions, and solving a system of equations. Computer Science (CS) community size ~ improvement in computing technologyCS community size ~ rate of log of computing efficiencyFixed amount of money is invested in AI every year To remind Moore's Law, well, it is: "number of transistors placed on a microprocessor at a fixed cost doubles every two years" as originally conceived. . References:

The Singularity is closer than it appears! Published on Mar 7, 2014 - Socrates of Singularity 1 on 1 sits down with William Hertling to talk about the technological singularity and AI. William Hertling is a rather recent science fiction discovery of mine and the author of award-winning novels Avogadro Corp: The Singularity Is Closer Than It Appears, A.I. Apocalypse, and The Last Firewall. William has written several plausible scenarios for the technological singularity that were so engaging and compelling that, as soon as I finished his first book, I could not help it but go ahead and read the next one too. And so I was very happy to get an opportunity and interview Hertling on my Singularity 1 on 1 podcast. Podcast: Play in new window | Download This is the second out of a series of 3 sci fi round-table interviews with Ramez Naam, William Hertling and Greg Bear that I did last November in Seattle. (You can listen to/download the audio file above or watch the video interview in full. Who is William Hertling? , A.I. . Listen/View

Evolution of evolvability Evolution of Evolvability This paper shows how evolution tunes the content and frequency of genetic variation to enhance its evolvability. Genetic evolution is not random or entirely blind. (For a more general approach to the evolution of evolvability, see Chapters 8 to 12 inclusive of the on-line book Evolution's Arrow. (a final version of this paper was published in the Journal of Social and Evolutionary Systems (1997) 20: 53-73.) The cognitive ability of a genetic system is its capacity to discover and perpetuate beneficial adaptations. Cognitive ability will be influenced by genetic arrangements which affect the range and types of variant genotypes which are produced and trialed within the genetic system. A genetic arrangement which enhances cognitive ability will be selected within a population where the arrangement captures sufficient of the fitness benefits which it produces through the discovery of successful variants. Are genetic arrangements which have these features feasible?

Why the Word "Transhumanism" Should Bother You, Too Want to have the ability to move things around with your mind, print out any new body parts you might need, including organs, and be able to work from home every day via a completely convincing virtual reality setup? All of these things are not only within reach, according to a movement that is gaining traction more rapidly than almost any other in history, but they are inevitably happening within the next 30 years. Many authors (myself included) struggle to give a name to this incredible movement, instead deferring to the event where all of this converging technology culminates in a brand new way of life for all human beings, utterly different in ways we aren't capable of imagining with our "unaugmented" human brains: the Technological Singularity. The world we live in is not one of linear growth, nor has it ever been one.

This was mentioned in a chat (the one that inspired me to do this pearltree because of my misery with chat). Looking it up, I can see this is indeed what we have been talking about and I see there is much more focus on technology than I see as part of the evolution. However, technology is a key component in my futurist collection of ACC novels. It also goes with my envirobank ideas. It doesn't however mesh with my desire to get more basic and unplugged which also seems an idea inspired partly by OP. by marynichols1 Jul 30