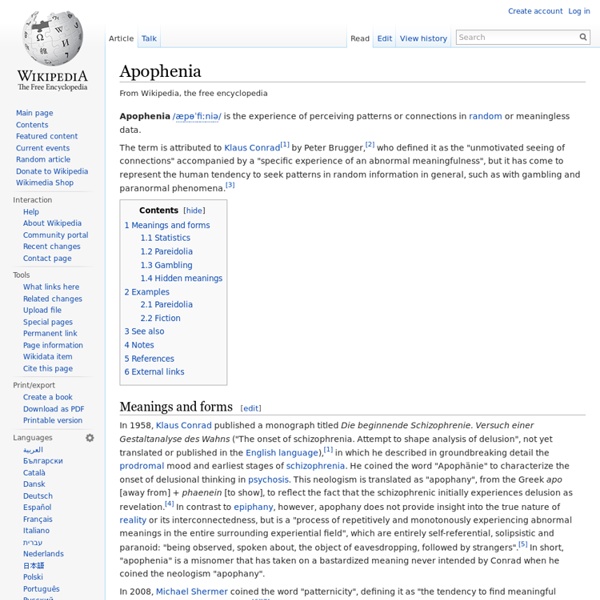 Apophenia /æpɵˈfiːniə/ is the experience of perceiving patterns or connections in random or meaningless data. The term is attributed to Klaus Conrad[1] by Peter Brugger,[2] who defined it as the "unmotivated seeing of connections" accompanied by a "specific experience of an abnormal meaningfulness", but it has come to represent the human tendency to seek patterns in random information in general, such as with gambling and paranormal phenomena.[3] Meanings and forms[edit] In 2008, Michael Shermer coined the word "patternicity", defining it as "the tendency to find meaningful patterns in meaningless noise".[6][7] In The Believing Brain (2011), Shermer says that we have "the tendency to infuse patterns with meaning, intention, and agency", which Shermer calls "agenticity".[8] Statistics[edit] Pareidolia[edit] Pareidolia is a type of apophenia involving the perception of images or sounds in random stimuli, for example, hearing a ringing phone while taking a shower. Gambling[edit] Examples[edit]

Synchronicity (The Police album) In 2009, Synchronicity was inducted into the Grammy Hall of Fame. In the 1983 Rolling Stone readers poll, Synchronicity was voted "Album of the Year". The album marked a significant reduction in the reggae influences that were a part of the band's first four records, instead featuring production-heavy textures and liberal use of synthesizers that, at times, drove entire songs ("Synchronicity I", "Wrapped Around Your Finger"). The influence of world music can also be heard in songs such as "Tea in the Sahara" and "Walking in Your Footsteps". The album was published in the UK and U.S. on both LP and CD in 1983, and on Super Audio CD in 2003. In 1989, it was published by Mobile Fidelity Sound Lab as a remastered gold CD.

exulansis “Creates beautiful new words that we need but do not yet have.” — John Green, author of The Fault in Our Stars The Dictionary of Obscure Sorrows is a compendium of invented words written by John Koenig. Liminality In anthropology, liminality (from the Latin word līmen, meaning "a threshold"[1]) is the quality of ambiguity or disorientation that occurs in the middle stage of rituals, when participants no longer hold their pre-ritual status but have not yet begun the transition to the status they will hold when the ritual is complete. During a ritual's liminal stage, participants "stand at the threshold" between their previous way of structuring their identity, time, or community, and a new way, which the ritual establishes. Rites of passage[edit] Arnold van Gennep[edit]

William James William James (January 11, 1842 – August 26, 1910) was an American philosopher and psychologist, and the first educator to offer a psychology course in the United States.[5] James is considered to be a leading thinker of the late nineteenth century, one of the most influential philosophers of the United States, and the "Father of American psychology".[6][7][8] Along with Charles Sanders Peirce, James established the philosophical school known as pragmatism, and is also cited as one of the founders of functional psychology. A Review of General Psychology analysis, published in 2002, ranked James as the 14th most eminent psychologist of the 20th century.[9] A survey published in American Psychologist in 1991 ranked James's reputation in second place,[10] after Wilhelm Wundt, who is widely regarded as the founder of experimental psychology.[11][12] James also developed the philosophical perspective known as radical empiricism. Early life[edit] William James in Brazil, 1865

Mind-wandering Mind-wandering (sometimes referred to as task unrelated thought) is the experience of thoughts not remaining on a single topic for a long period of time, particularly when people are engaged in an attention-demanding task.[1] Mind-wandering appears to be a stable trait of people and a transient state. Studies have linked performance problems in the laboratory[6] and in daily life.[7] Mind-wandering has been associated with possible car accidents.[8] Mind-wandering is also intimately linked to states of affect. Studies indicate that task-unrelated thoughts are common in people with low or depressed mood.[9][10] Mind-wandering also occurs when a person is intoxicated via the consumption of alcohol.[11]

George Savage (physician) Savage was born in Brighton in 1842, the son of a chemist. Educated at Brighton College, he served an internship at Guy's Hospital from 1861. After 1865, he was resident at Guy's; he earned his MD in 1867. He remained a regular lecturer at the hospital for decades after.

Pierre Janet He is ranked alongside William James and Wilhelm Wundt as one of the founding fathers of psychology.[1] Biography[edit] Janet studied under Jean-Martin Charcot at the Psychological Laboratory in the Pitié-Salpêtrière Hospital in Paris. He first published the results of his research in his philosophy thesis in 1889 and in his medical thesis, L'état mental des hystériques, in 1892. Schizoaffective disorder Schizoaffective disorder (SZA, SZD or SAD) is a mental disorder characterized by abnormal thought processes and an unstable mood.[5][6] The diagnosis is made when the person has symptoms of both schizophrenia (usually psychosis) and a mood disorder—either bipolar disorder or depression—but does not meet the diagnostic criteria for schizophrenia or a mood disorder individually.[5][6] The main criterion for the schizoaffective disorder diagnosis is the presence of psychotic symptoms for at least two weeks without any mood symptoms present.[6] Schizoaffective disorder can often be misdiagnosed[6] when the correct diagnosis may be psychotic depression, psychotic bipolar disorder, schizophreniform disorder or schizophrenia. It is imperative for providers to accurately diagnose patients, as treatment and prognosis differs greatly for each of these diagnoses.[6][7] Signs and symptoms[edit]