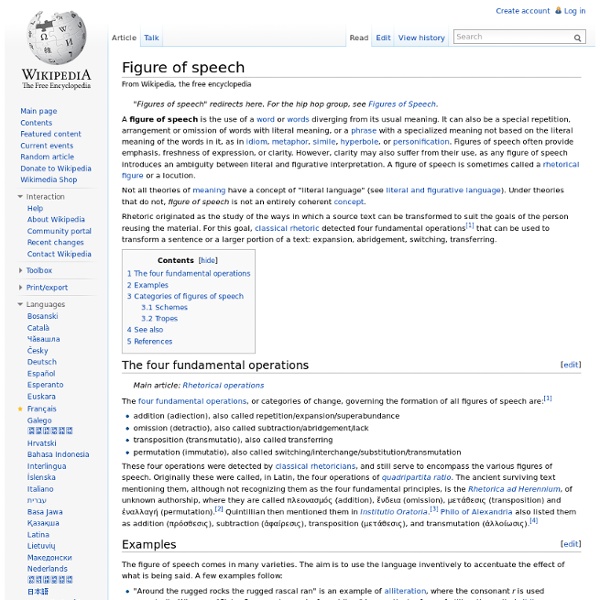 A figure of speech is the use of a word or a phrase, which transcends its literal interpretation. It can be a special repetition, arrangement or omission of words with literal meaning, or a phrase with a specialized meaning not based on the literal meaning of the words in it, as in idiom, metaphor, simile, hyperbole, personification, or synecdoche. Figures of speech often provide emphasis, freshness of expression, or clarity. However, clarity may also suffer from their use, as any figure of speech introduces an ambiguity between literal and figurative interpretation. A figure of speech is sometimes called a rhetorical figure or a locution. Rhetoric originated as the study of the ways in which a source text can be transformed to suit the goals of the person reusing the material. The four fundamental operations[edit] The four fundamental operations, or categories of change, governing the formation of all figures of speech are:[1] Examples[edit] Figures of speech come in many varieties. Related:  literature • τέχνιχ

List of forms of word play This is a list of techniques used in word play with Wikipedia articles. Techniques that involve the phonetic values of words Mondegreen: a mishearing (usually unintentional) ase as a homophone or near-homophone that has as a result acquired a new meaning. The term is often used to refer specifically to mishearings of song lyrics (cf. soramimi).Onomatopoeia: a word or a grouping of words that imitates the sound it is describingRhyme: a repetition of identical or similar sounds in two or more different words Alliteration: matching consonants sounds at the beginning of wordsAssonance: matching vowel soundsConsonance: matching consonant soundsHolorime: a rhyme that encompasses an entire line or phraseSpoonerism: a switch of two sounds in two different words (cf. sananmuunnos)Janusism: the use of phonetics to create a humorous word (e.g. GAYsha from Geisha)) Techniques that involve semantics and the choosing of words Techniques that involve the manipulation of the entire sentence or passage

Sources Repetition (rhetorical device) Repetition is the simple repeating of a word, within a sentence or a poetical line, with no particular placement of the words, in order to secure emphasis. This is such a common literary device that it is almost never even noted as a figure of speech. It also has connotations to listing for effect and is used commonly by famous poets such as Philip Larkin. Antanaclasis is the repetition of a word or phrase to effect a different meaning "We must all hang together, or assuredly we shall all hang separately." (Benjamin Franklin) Epizeuxis or palilogia is the repetition of a single word, with no other words in between. "Words, words, words." Conduplicatio is the repetition of a word in various places throughout a paragraph. "And the world said, 'Disarm, disclose, or face serious consequences'—and therefore, we worked with the world, we worked to make sure that Saddam Hussein heard the message of the world Anadiplosis is the repetition of the last word of a preceding clause.

The modes of drawing. Why is it that your friend is "artistic" and you are not? It may be because your friend is using a different part of the brain than you are. Your friend can "see" things differently than you can because they are interpreting what they see in a different way than you are. They're looking at the world in terms of shapes, lines, colors, and the relationships between these things. Have you ever noticed that when you get into doing something that you really enjoy time just seems to slip away? Would you say that you're better at math than drawing? We use both modes all the time. When you were a child, you had fun drawing because you were able to put marks on a piece of paper that represented something to you.

The Hollow Men Poem Text Mistah Kurtz—he dead. A penny for the Old Guy IWe are the hollow menWe are the stuffed menLeaning togetherHeadpiece filled with straw. Alas!Our dried voices, whenWe whisper togetherAre quiet and meaninglessAs wind in dry grassOr rats' feet over broken glassIn our dry cellar Shape without form, shade without colour,Paralysed force, gesture without motion; Those who have crossedWith direct eyes, to death's other KingdomRemember us—if at all—not as lostViolent souls, but onlyAs the hollow menThe stuffed men. IIEyes I dare not meet in dreamsIn death's dream kingdomThese do not appear:There, the eyes areSunlight on a broken columnThere, is a tree swingingAnd voices areIn the wind's singingMore distant and more solemnThan a fading star. Let me be no nearerIn death's dream kingdomLet me also wearSuch deliberate disguisesRat's coat, crowskin, crossed stavesIn a fieldBehaving as the wind behavesNo nearer— Not that final meetingIn the twilight kingdom For Thine isLife isFor Thine is the

Elegant variation It is the second-rate writers, those intent rather on expressing themselves prettily than on conveying their meaning clearly, & still more those whose notions of style are based on a few misleading rules of thumb, that are chiefly open to the allurements of elegant variation.... There are few literary faults so widely prevalent, & this book will not have been written in vain if the present article should heal any sufferer of his infirmity.The fatal influence is the advice given to young writers never to use the same word twice in a sentence — or within 20 lines or other limit. The advice has its uses; it reminds any who may be in danger of forgetting it that there are such things as pronouns, the substitution of which relieves monotony;... It also gives a useful warning that a noticeable word used once should not be used again in the neighbourhood with a different application.[1] "Inelegant variation"[edit] Bryan A. In poetry[edit] In other languages[edit] Examples[edit] See also[edit]

How to Be Photogenic: 10 steps (with video) Edit Article Focusing on Your FacePosing Your BodyConsidering the Photos Edited by Alan J, Jack Herrick, Taxciter, Zack and 125 others Having your photo taken can seem like a frightening endeavor, especially when it seems that you never look quite as good in portraits as you do in reality. Ad Steps Method 1 of 3: Focusing on Your Face 1Clarify your skin. 5Adjust the angle of your face. Method 2 of 3: Posing Your Body 1Work your assets. 5Do what’s comfortable. Method 3 of 3: Considering the Photos 1Dress to impress. 5Act confident. Tips Take more than one picture before setting the camera down. Article Info