Silva Rhetoricae: The Forest of Rhetoric 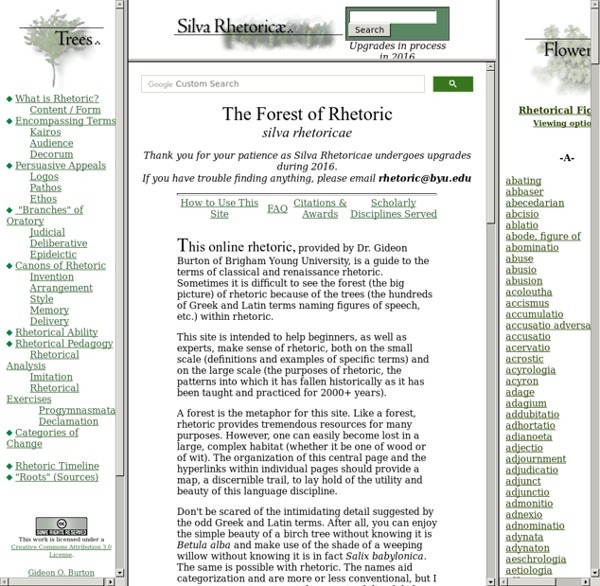 Why You Can't Change People's Minds With Facts The UK’s recent referendum on European Union membership seems to have exposed deep fault lines in British society, if the strength of feeling shown in arguments on social media is anything to go by. I’ve certainly seen the normal rules of civilised conversation set aside, people on either side calling each other terrible things, and huge amounts of anger and discourtesy. What I haven’t seen is anyone saying “Yes, I appreciate your argument even though I previously disagreed with it – I will re-examine my opinion.” This tends to baffle ‘Remain’ voters who can’t understand why the ‘Leave’ partisans aren’t changing their minds, even though the claims made by the ‘Leave’ campaign about immigration and finances (on which presumably they based their decision) are rapidly being rowed back from or disavowed by the same politicians who were trumpeting them before the campaign. Why aren’t the ‘Leave’ enthusiasts changing their minds in the light of the new information that’s coming in daily? 1.

Brian Christian: Algorithms to Live By It is possible to be extremely astute about how we manage difficult decisions. With just a few mental tools we get the benefit of better outcomes along with release from agonizing about the process of deciding. Many mental tools—algorithms—developed with obligatory clarity for computers turn out to have ready application for humans facing such problems as: when to stop hunting for an apartment (or lover); how much novelty to seek; how to get rid of the right stuff; how to allot scarce time; how to consider the future; when to relax constraints; how to give chance a chance; how to recognize when you’re playing the wrong game; and how to make decisions easier for others (“computational kindness”).

uk.businessinsider AMC via Netflix If you want to convince someone that your explanation for something is the best way to explain it, you might want to tack on some useless (though accurate) information from a tangentially related scientific field. It turns out that when you tack on additional information from a respected field of study, people think that makes an explanation more credible. That strategy can be devised from the findings of a recent study conducted by University of Pennsylvania researchers that was published in the journal Cognition. And while this is a new finding, it's just one of several cognitive biases we have in favor of certain types of explanations. We think longer explanations are better than short ones and we prefer explanations that point to a goal or a reason for things happening, even if these things don't actually help us understand a phenomenon.

The Tyranny of Facts: Being “Right” is Not Enough The Tyranny of Facts: Being “Right” is Not Enough Most philosophical and political disagreements don’t take place in courtrooms, they take place using a series of text boxes levied against an often-anonymous opponent. Or, if in person, in a setting where you don’t exactly have a notebook full of facts you’ve vetted and researched for your conversation with your college roommate about the flat tax . Yet, too often in our political discourse we act as if we are one hand-picked fact from totally convincing the Other Side. Your political opposites should be convinced when they hear a study or poll or story.

HugeDomains.com - Cancre.com is for sale (Cancre) Hurry - don't lose your domain to someone else! 1,852 Customers shopping on HugeDomains right now! 73% of all domains registered on the Web are .coms. The reason is simple: .com is the where most of Web traffic happens. Owning a premium .com gives you great benefits including better SEO, name recognition, and providing your site with a sense of authority.

The Questions That Matter The Questions That Matter And the questions that don’t. Basic questions are good questions. To tell someone they're wrong, first tell them how they're right — Quartz The 17th century philosopher Blaise Pascal is perhaps best known for Pascal’s Wager which, in the first formal use of decision theory, argued that believing in God is the most pragmatic decision. But it seems the French thinker also had a knack for psychology. As Brain Pickings points out, Pascal set out the most effective way to get someone to change their mind, centuries before experimental psychologists began to formally study persuasion: When we wish to correct with advantage, and to show another that he errs, we must notice from what side he views the matter, for on that side it is usually true, and admit that truth to him, but reveal to him the side on which it is false.

How to Think Like Shakespeare - The Chronicle of Higher Education Class of 2020, welcome to college. Right about now, your future professors are probably sitting in a faculty meeting, rolling their eyes at their dean’s recitation of the annual Beloit College Mindset List, which catalogs the cultural touchstones of your lives. But to me, the most momentous event in your intellectual formation was the 2001 No Child Left Behind Act, which ushered in our disastrous fixation on testing. Your generation is the first to have gone through primary and secondary school knowing no alternative to a national regimen of assessment. The Map is Not the Territory “(History) offers a ridiculous spectacle of a fragment expounding the whole.” — Will Durant in Our Oriental Heritage “That’s another thing we’ve learned from your Nation,” said Mein Herr, “map-making. But we’ve carried it much further than you. What do you consider the largest map that would be really useful?”“About six inches to the mile.”“Only six inches!”

Why Facts Don’t Change Our Minds In 1975, researchers at Stanford invited a group of undergraduates to take part in a study about suicide. They were presented with pairs of suicide notes. In each pair, one note had been composed by a random individual, the other by a person who had subsequently taken his own life.