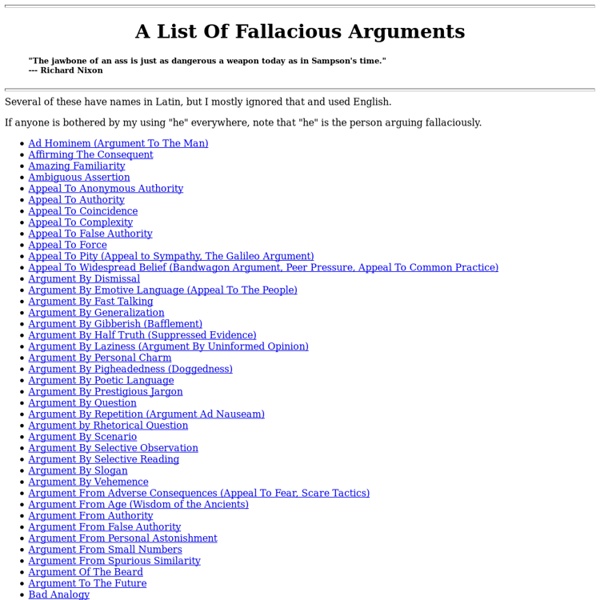 attacking the person instead of attacking his argument. For example, "Von Daniken's books about ancient astronauts are worthless because he is a convicted forger and embezzler." (Which is true, but that's not why they're worthless.) Another example is this syllogism, which alludes to Alan Turing's homosexuality: Turing thinks machines think. Turing lies with men. (Note the equivocation in the use of the word "lies".)

Why People "Fly from Facts" “There was a scientific study that showed vaccines cause autism.” “Actually, the researcher in that study lost his medical license, and overwhelming research since then has shown no link between vaccines and autism.” “Well, regardless, it’s still my personal right as a parent to make decisions for my child.” Does that exchange sound familiar: a debate that starts with testable factual statements, but then, when the truth becomes inconvenient, the person takes a flight from facts. As public debate rages about issues like immunization, Obamacare, and same-sex marriage, many people try to use science to bolster their arguments. And since it’s becoming easier to test and establish facts—whether in physics, psychology, or policy—many have wondered why bias and polarization have not been defeated.

Top 20 Logical Fallacies - The Skeptics' Guide to the Universe Introduction to Argument Structure of a Logical Argument Whether we are consciously aware of it or not, our arguments all follow a certain basic structure. They begin with one or more premises, which are facts that the argument takes for granted as the starting point. Then a principle of logic is applied in order to come to a conclusion. List of fallacies A fallacy is incorrect argument in logic and rhetoric resulting in a lack of validity, or more generally, a lack of soundness. Fallacies are either formal fallacies or informal fallacies. Formal fallacies[edit]

Perfect solution fallacy by Tim Harding “The perfect is the enemy of the good.” — Voltaire “Nobody made a greater mistake than he who did nothing because he could do only a little.” – Edmund Burke The Perfect Solution Fallacy (also known as the ‘Nirvana Fallacy‘) is a false dichotomy that occurs when an argument assumes that a perfect solution to a problem exists and/or that a proposed solution should be rejected because some part of the problem would still exist after it were implemented. Arguments for the existence of God Multimedia Ontological arguments Cosmological arguments Kalam cosmological argument The aim of this argument is to show that the universe had a beginning in the finite past. The argument battles against the existence of an infinite, temporal regress of past events which implies a universe that has infinitely existed.

"Review of Literature" UW-Madison Writing Center Writer's Handbook What is a review of literature? The format of a review of literature may vary from discipline to discipline and from assignment to assignment. A review may be a self-contained unit -- an end in itself -- or a preface to and rationale for engaging in primary research. Strategies for critical thinking in learning, Part I Thinking and recall series Strategies for critical thinking in learning and project management Critical thinking studies a topic or problem with open-mindedness.This exercise outlines the first stage of applying a critical thinking approach to developing and understanding a topic.