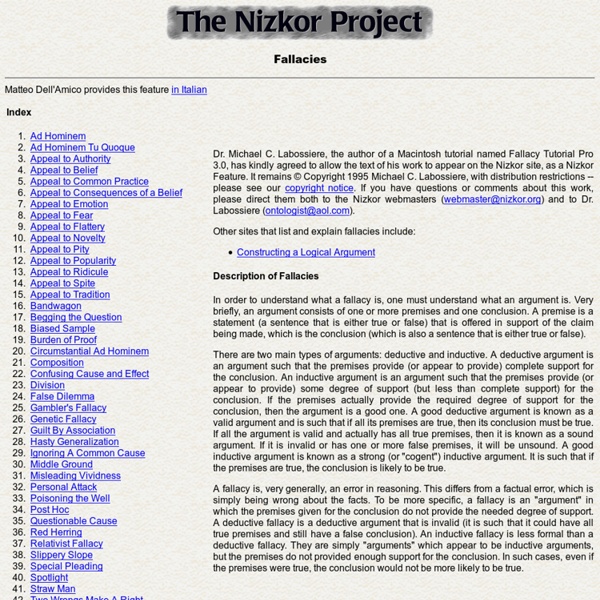 Dr. Michael C. Labossiere, the author of a Macintosh tutorial named Fallacy Tutorial Pro 3.0, has kindly agreed to allow the text of his work to appear on the Nizkor site, as a Nizkor Feature. It remains © Copyright 1995 Michael C. Labossiere, with distribution restrictions -- please see our copyright notice. If you have questions or comments about this work, please direct them both to the Nizkor webmasters (webmaster@nizkor.org) and to Dr. Other sites that list and explain fallacies include: Constructing a Logical Argument Description of Fallacies In order to understand what a fallacy is, one must understand what an argument is. There are two main types of arguments: deductive and inductive. A fallacy is, very generally, an error in reasoning.

32 Animated Videos by Wireless Philosophy Teach You the Essentials of Critical Thinking Do you know someone whose arguments consist of baldly specious reasoning, hopelessly confused categories, archipelagos of logical fallacies buttressed by seawalls of cognitive biases? Surely you do. Perhaps such a person would welcome some instruction on the properties of critical thinking and argumentation? Not likely? Romanticism Defining Romanticism[edit] Basic characteristics[edit] Defining the nature of Romanticism may be approached from the starting point of the primary importance of the free expression of the feelings of the artist. The importance the Romantics placed on untrammelled feeling is summed up in the remark of the German painter Caspar David Friedrich that "the artist's feeling is his law".[7] To William Wordsworth poetry should be "the spontaneous overflow of powerful feelings".[8] In order to truly express these feelings, the content of the art must come from the imagination of the artist, with as little interference as possible from "artificial" rules dictating what a work should consist of. Not essential to Romanticism, but so widespread as to be normative, was a strong belief and interest in the importance of nature.

10 Team-Building Games That Promote Critical Thinking 10 Team-Building Games That Promote Critical Thinking by TeachThought Staff One of education’s primary goals is to groom the next generation of little humans to succeed in the “real world.” Yes, there are mounds of curricula they must master in a wide breadth of subjects, but education does not begin and end with a textbook or test. Other skills must be honed, too, not the least of which is how to get along with their peers and work well with others.

Ancien Régime This article is about the administrative, judicial, and ecclesiastic structures of the Kingdom of France in the pre-revolutionary period. For a general history of France in this period, see Early modern France. For the political history of France in this period, see Kingdom of France. Wiltshire shooting: Solicitor James Ward who was blasted in the head with a sawn-off shotgun as he sat in his office has died after three weeks in hospital Married father-of-three James Ward, 58, died in hospital surrounded by his familyProperty developer Michael Chudleigh had already been charged with attempted murderPolice say they will work with Crown Prosecution Service to ensure charges reflect Mr Ward's death By Helen Lawson Published: 16:32 GMT, 23 July 2012 | Updated: 16:37 GMT, 23 July 2012 A solicitor who was shot in the head at his firm's offices in Devizes has died of his injuries with his family by his side. James Ward, 58, was shot by property developer Michael Chudleigh with a sawn-off shotgun on Monday July 2. Mr Ward, who is the principal solicitor of the Morris, Goddard & Ward firm, suffered life-threatening head injuries and was airlifted to Frenchay Hospital near Bristol.

Top 20 Logical Fallacies - The Skeptics' Guide to the Universe Introduction to Argument Structure of a Logical Argument Whether we are consciously aware of it or not, our arguments all follow a certain basic structure. They begin with one or more premises, which are facts that the argument takes for granted as the starting point. Then a principle of logic is applied in order to come to a conclusion. This structure is often illustrated symbolically with the following example: edutopia Editor's note: This post is co-authored by Nancy Frey, a Professor of Literacy in Educational Leadership at San Diego State University and a credentialed special educator, reading specialist, and administrator. Questions are a common way for teachers to check for understanding, right? The answer we’re looking for is "yes."