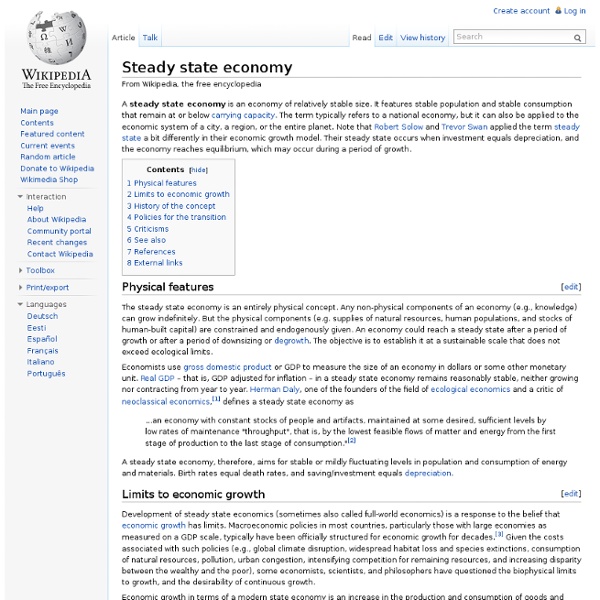 A steady state economy is an economy of relatively stable size. It features stable population and stable consumption that remain at or below carrying capacity. The term typically refers to a national economy, but it can also be applied to the economic system of a city, a region, or the entire planet. Note that Robert Solow and Trevor Swan applied the term steady state a bit differently in their economic growth model. Their steady state occurs when investment equals depreciation, and the economy reaches equilibrium, which may occur during a period of growth. Physical features[edit] The steady state economy is an entirely physical concept. Economists use gross domestic product or GDP to measure the size of an economy in dollars or some other monetary unit. A steady state economy, therefore, aims for stable or mildly fluctuating levels in population and consumption of energy and materials. Limits to economic growth[edit] History of the concept[edit] and Policies for the transition[edit] Related:  Economics • zero growth - population and sustainable economics

Crowdsourcing Crowdsourcing is a sourcing model in which individuals or organizations obtain goods and services. These services include ideas and finances, from a large, relatively open and often rapidly-evolving group of internet users; it divides work between participants to achieve a cumulative result. The word crowdsourcing itself is a portmanteau of crowd and outsourcing, and was coined in 2005.[1][2][3][4] As a mode of sourcing, crowdsourcing existed prior to the digital age (i.e. "offline").[5] There are major differences between crowdsourcing and outsourcing. Crowdsourcing comes from a less-specific, more public group, whereas outsourcing is commissioned from a specific, named group, and includes a mix of bottom-up and top-down processes.[6][7][8] Advantages of using crowdsourcing may include improved costs, speed, quality, flexibility, scalability, or diversity.[9][10] Definitions[edit] In a February 1, 2008, article, Daren C. Historical examples[edit] Timeline of major events[edit] G.

Participatory economics Albert and Hahnel stress that parecon is only meant to address an alternative economic theory and must be accompanied by equally important alternative visions in the fields of politics, culture and kinship. The authors have also discussed elements of anarchism in the field of politics, polyculturalism in the field of culture, and feminism in the field of family and gender relations as being possible foundations for future alternative visions in these other spheres of society. Stephen R. Shalom has begun work on a participatory political vision he calls "par polity". Decision-making principle[edit] One of the primary propositions of parecon is that all persons should have a say in decisions proportionate to the degree to which they are affected by them. Work in a participatory economy[edit] Balanced job complexes[edit] Some tasks and jobs are more desirable than others, and some tasks and jobs are more menial than others. Compensation for effort and sacrifice[edit] Facilitation Boards[edit]

Book Bytes - 109: Getting the Market to Tell the Truth April 11, 2012 Getting the Market to Tell the Truth Lester R. Brown Moving the global economy off its current decline-and-collapse path depends on reaching four goals: stabilizing climate, stabilizing population, eradicating poverty, and restoring the economy’s natural support systems. These goals—comprising what the Earth Policy Institute calls “Plan B” to save civilization—are mutually dependent. The key to restructuring the economy is to get the market to tell the truth through full-cost pricing. For energy specifically, full-cost pricing means putting a tax on carbon to reflect the full cost of burning fossil fuels and offsetting it with a reduction in the tax on income. The failure of the market to reflect total costs can readily be seen with gasoline. If we can get the market to tell the truth, to have market prices that reflect the full cost of burning gasoline or coal, of deforestation, of overpumping aquifers, and of overfishing, then we can begin to create a rational economy.

Exponential Economist Meets Finite Physicist [slimstat f='count' w='ip' lf='resource contains economist'] views this month; [slimstat f='count' w='ip' lf='strtotime equals 2011-07-01|interval equals -1'] overall Some while back, I found myself sitting next to an accomplished economics professor at a dinner event. Shortly after pleasantries, I said to him, “economic growth cannot continue indefinitely,” just to see where things would go. It was a lively and informative conversation. Cast of characters: Physicist, played by me; Economist, played by an established economics professor from a prestigious institution. Note: because I have a better retention of my own thoughts than those of my conversational companion, this recreation is lopsided to represent my own points/words. Act One: Bread and Butter Physicist: Hi, I’m Tom. Economist: Hi Tom, I’m [ahem..cough]. Physicist: Hey, that’s great. Economist: [chokes on bread crumb] Did I hear you right? Physicist: That’s right. Economist: Well sure, nothing truly lasts forever. Total U.S.

Can Decreix | decreixementacampadabcn (català, castellano) Can Decreix is a place to demonstrate and reflect around the topic of degrowth. In case you are nor familiar with the term: Degrowth is a word with many co-meanings. Started by activist scientists from Research & Degrowth (www.degrowth.org), Can Decreix is a centre for transformation (of fruits, vegetables, societies), for research, for testing frugal technologies, arts and permaculture. Cerbere is a land of cactus, sea-side cliffs and rocky beaches, a cross-road for languages (French, Spanish and Catalan) and travelers (hosting a border train station between France and Spain). Can Decreix tries to be an open space, which is connected with its surroundings. The terrain has vineyards and olive trees, situated in the typical for Languedoc-Roussillon terrace shape construction. Can Decreix is also a quiet place for to thinking and writing. Some more informations and Photografs: here. Me gusta: Me gusta Cargando...

Environmental economics Environmental economics is a sub-field of economics concerned with environmental issues. It has become a widely studied topic due to growing environmental concerns in the twenty-first century. Environmental Economics "...undertakes theoretical or empirical studies of the economic effects of national or local environmental policies around the world ... . Particular issues include the costs and benefits of alternative environmental policies to deal with air pollution, water quality, toxic substances, solid waste, and global warming."[1] Topics and concepts[edit] Market failure[edit] Air pollution is an example of market failure, as the factory is imposing a negative external cost on the community. Externality[edit] An externality exists when a person makes a choice that affects other people in a way that is not accounted for in the market price. Common goods and public goods[edit] These challenges have long been recognized. Global biochemical cycles Valuation[edit] Solutions[edit] See also[edit]