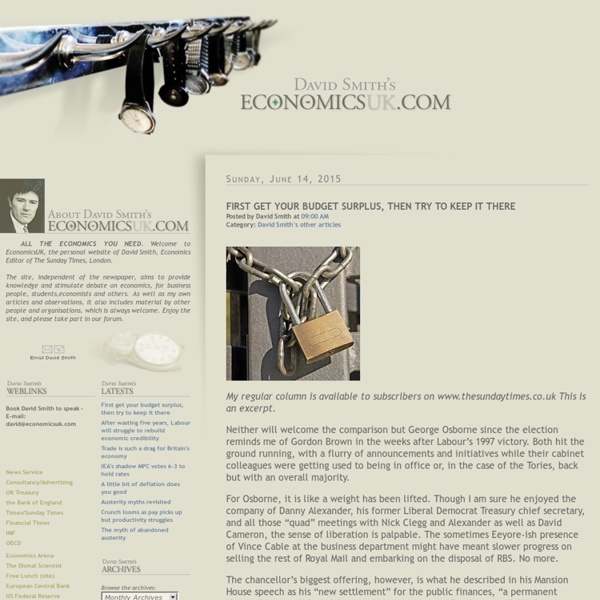 Austerity myths revisited Posted by David Smith at 01:00 PM Category: Thoughts and responses My piece on Friday, The Myth of Abandoned Austerity, has attracted quite a lot of interest. It had a simple aim - to demonstrate that fiscal consolidation, deficit reduction, continued throughout the parliament, alongside recovery. Simon Wren-Lewis, a professor of economics at Oxford, devoted a blog post to it, here. Jonathan Portes, director of the National Institute of Economic and Social Research, was typically condescending, tweeting that I was "confused (& confusing)". Let me respond to Simon. But Simon answers the question himself: “I know this cannot be the case because I have never said that austerity was abandoned in 2012. That means, he suggests, that I am guilty of creating a straw man. This is not quite the same, of course, as economists that Simon might know saying austerity has been abandoned. (More...)

Strategic quantitative easing Strategic quantitative easing Key findings▲ The Bank of England's programmes of QE and Funding for Lending are failing to stimulate GDP. A better approach would channel investment directly into new housing, infrastructure and SME lending. Share this: Photo credit: liamgrue July 1, 2013 // Written by: Josh Ryan-Collins, Associate Director, Economy and FinanceTony Greenham, Head of Economy & FinanceGiovanni Bernardo, Research Economist Richard Werner, Director of the Centre for Banking, Finance and Sustainable Development, University of Southampton The Bank of England’s programmes of Quantitative Easing (QE) and Funding for Lending (FLS) are failing to stimulate GDP and rebalance the economy. The impact of QE: theory and evidence The way QE has been interpreted and applied in the UK has benefitted some parts of the economy at the expense of others. If it is broke, don’t use it: FLS and the problem with trying to get banks to lend Strategic QE: public money for public benefit Issues More More