Daniel Kahneman: The riddle of experience vs. memory 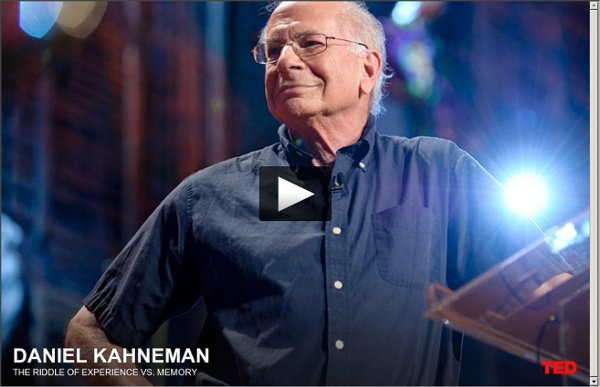 In rich and poor nations, giving makes people feel better than getting, research finds Feeling good about spending money on someone else rather than for personal benefit may be a universal response among people in both impoverished countries and rich nations, according to new research published by the American Psychological Association. "Our findings suggest that the psychological reward experienced from helping others may be deeply ingrained in human nature, emerging in diverse cultural and economic contexts," said lead author Lara Aknin, PhD, of Simon Fraser University in Canada. The findings provide the first empirical evidence that "the warm glow" of spending on someone else rather than on oneself may be a widespread component of human psychology, the authors reported in the study published online in APA's Journal of Personality and Social Psychology.

The Simple Phrase that Increases Effort 40% Every teacher or coach worth their salt knows that there’s no moment more important than the moment feedback is delivered. Do it correctly, and the learner takes a step forward. Do it poorly, and the reverse happens. The deeper question is, what’s the secret of great feedback? We instinctively think that effective feedback is about the quality of the information — telling the learner to do this and not that. But is this true, or is there something else going on? EDGE MASTER CLASS 2008—CLASS 1 RICHARD THALER: Here is the way Sendhil Mullainathan and I have thought about the day and a half that we have here. We have a pretty good idea of what we would like to do for the first three of our six sessions. This first session will be an overview of the concept of libertarian paternalism and choice architecture. The second one will flow directly from that, and has an idea, a solution, and we're going to talk about the problem that it may or may not solve. Then after lunch Sendhil is going to talk to us about some of the work he is doing on poverty.

What motivates us at work? 7 fascinating studies that give insights “When we think about how people work, the naïve intuition we have is that people are like rats in a maze,” says behavioral economist Dan Ariely in today’s talk, given at TEDxRiodelaPlata. “We really have this incredibly simplistic view of why people work and what the labor market looks like.” Dan Ariely: What makes us feel good about our work?When you look carefully at the way people work, he says, you find out there’s a lot more at play—and a lot more at stake—than money. In his talk, Ariely provides evidence that we are also driven by meaningful work, by others’ acknowledgement and by the amount of effort we’ve put in: the harder the task is, the prouder we are. During the Industrial Revolution, Ariely points out, Adam Smith’s efficiency-oriented, assembly-line approach made sense.

Daniel Kahneman on Making Smarter Decisions The bestselling author of Thinking, Fast and Slow talks about overcoming the cognitive biases and errors that can affect decision-making. You can avoid decision-making mistakes by understanding the differences between these two systems of thought. Nobel winner Daniel Kahneman says we tyically fear loss twice as much as we relish success. That's why it's so hard to take a risk Nobel laureate Daniel Kahneman says people always overestimate their ability to predict the future. Behavioral economics There are three prevalent themes in behavioral finances:[3] Issues in behavioral economics[edit] Behavioral finance[edit] The central issue in behavioral finance is explaining why market participants make systematic errors contrary to assumption of rational market participants.[1] Such errors affect prices and returns, creating market inefficiencies. It also investigates how other participants take advantage (arbitrage) of such market inefficiencies. Behavioral finance highlights inefficiencies such as under- or over-reactions to information as causes of market trends (and in extreme cases of bubbles and crashes).

Survival of the ... Nicest? Check Out the Other Theory of Evolution by Eric Michael Johnson A new theory of human origins says cooperation—not competition—is instinctive. posted May 03, 2013 A century ago, industrialists like Andrew Carnegie believed that Darwin’s theories justified an economy of vicious competition and inequality. They left us with an ideological legacy that says the corporate economy, in which wealth concentrates in the hands of a few, produces the best for humanity. This was always a distortion of Darwin’s ideas. His 1871 book The Descent of Man argued that the human species had succeeded because of traits like sharing and compassion.

What Behavioral Economics Is Not Since the release of 2008′s Nudge, behavioral economics (BE) has quietly invaded the public’s perception. Some of the most well-known examples include the creation of the Behavioral Insights Team in the UK, Cass Sunstein’s appointment in the Obama Administration, and the rise of popular economics books like Daniel Kahneman’s Thinking, Fast and Slow (and to a certain extent Freakonomics, which is not actually about BE). This prominence has led to gut reactions, polarized opinions, and popular misconceptions.

Tapping our powers of persuasion Most psychologists will read this “Questionnaire” with Robert Cialdini, PhD. That may or may not be true, but according to Cialdini, that statement is powerfully persuasive because we tend to go along with our peers. Cialdini, who retired last year from a teaching and research position at Arizona State University in Tempe, Ariz., is a renowned expert in the science of swaying. In his seminal book on the topic, “Influence: The Psychology of Persuasion” (Quill, 1984), he went undercover to learn the tricks mastered by used-car dealers and Fortune 500 executives alike, bringing persuasion research to psychology’s forefront. Cialdini distilled his findings into six “weapons of influence,” each grounded in how we perceive ourselves or others: Reciprocity: We inherently want to return favors.

Giving makes young children happy If it is indeed nobler to give than to receive, it may also make you happier -- even if you're a toddler, according to a new study co-authored by three psychologists at the University of British Columbia. The study, published in PLoS One, an on-line journal from the Public Library of Science, finds that toddlers under the age of two are happier when giving treats to others than receiving treats themselves. Furthermore, children are happier when they give their own treats away than when they give an identical treat that doesn't belong to them. Unit Bias: Cooking, Dieting and Investing Feast and Famine Cooking is, of all the inventions that have propelled mankind to the top of the food chain, probably the most important. Our dubious ascent to mastery of all we survey, other than investment bankers’ bonuses, is founded not on the skills of the scientist or the warrior but those of the humble cook.