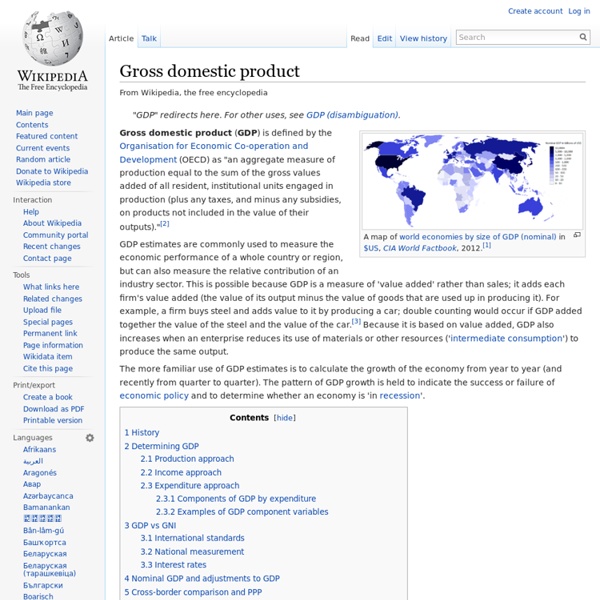 Gross domestic product (GDP) is defined by the Organisation for Economic Co-operation and Development (OECD) as "an aggregate measure of production equal to the sum of the gross values added of all resident, institutional units engaged in production (plus any taxes, and minus any subsidies, on products not included in the value of their outputs)."[2] GDP estimates are commonly used to measure the economic performance of a whole country or region, but can also measure the relative contribution of an industry sector. The more familiar use of GDP estimates is to calculate the growth of the economy from year to year (and recently from quarter to quarter). History[edit] The concept of GDP was first developed by Simon Kuznets for a US Congress report in 1934.[4] In this report, Kuznets warned against its use as a measure of welfare (see below under limitations and criticisms). The history of the concept of GDP should be distinguished from the history of changes in ways of estimating it. Related:  Economics

Externality In economics, an externality is the cost or benefit that affects a party who did not choose to incur that cost or benefit.[1] Implications[edit] External costs and benefits Voluntary exchange is considered mutually beneficial to both parties involved, because buyers or sellers would not trade if either thought it detrimental to themselves. However, a transaction can cause additional effects on third parties. A voluntary exchange may reduce societal welfare if external costs exist. On the other hand, a positive externality would increase the utility of third parties at no cost to them. There are a number of potential means of improving overall social utility when externalities are involved. Laissez-faire economists such as Friedrich Hayek and Milton Friedman sometimes refer to externalities as "neighborhood effects" or "spillovers", although externalities are not necessarily minor or localized. Examples[edit] Negative[edit] Barry Commoner commented on the costs of externalities:

Gross national product Gross national product (GNP) is the market value of all the products and services produced in one year by labor and property supplied by the citizens of a country. Unlike Gross Domestic Product (GDP), which defines production based on the geographical location of production, GNP allocates production based on ownership. GNP does not distinguish between qualitative improvements in the state of the technical arts (e.g., increasing computer processing speeds), and quantitative increases in goods (e.g., number of computers produced), and considers both to be forms of "economic growth".[1] Basically, GNP is the total value of all final goods and services produced within a country in a particular year, plus income earned by its citizens (including income of those located abroad)(no need to minus income of non resident as income includes of only its citizen). GNP measures the value of goods and services that the country's citizens produced regardless of their location. Use[edit] GNP Growth[edit]

Globalization Globalisation (or globalization) is the process of international integration arising from the interchange of world views, products, ideas, and other aspects of culture.[1][2] Advances in transportation and telecommunications infrastructure, including the rise of the telegraph and its posterity the Internet, are major factors in globalization, generating further interdependence of economic and cultural activities.[3] Though scholars place the origins of globalization in modern times, others trace its history long before the European age of discovery and voyages to the New World. Some even trace the origins to the third millennium BCE.[4][5] In the late 19th century and early 20th century, the connectedness of the world's economies and cultures grew very quickly. Overview[edit] Humans have interacted over long distances for thousands of years. Airline personnel from the "Jet set" age, circa 1960. Etymology and usage[edit] Sociologists Martin Albrow and Elizabeth King define globalization as:

Interest rate An interest rate is the rate at which interest is paid by borrowers (debtors) for the use of money that they borrow from lenders (creditors). Specifically, the interest rate is a percentage of principal paid a certain number of times per period for all periods during the total term of the loan or credit. Interest rates are normally expressed as a percentage of the principal for a period of one year, sometimes they are expressed for different periods like for a month or a day. Different interest rates exist parallelly for the same or comparable time periods, depending on the default probability of the borrower, the residual term, the payback currency, and many more determinants of a loan or credit. Interest-rate targets are a vital tool of monetary policy and are taken into account when dealing with variables like investment, inflation, and unemployment. Interest rate notations[edit] Historical interest rates[edit] Interest rates in the United States[edit] is widely used. where: Risk[edit] so

Inflation In economics, inflation is a sustained increase in the general price level of goods and services in an economy over a period of time.[1] When the price level rises, each unit of currency buys fewer goods and services. Consequently, inflation reflects a reduction in the purchasing power per unit of money – a loss of real value in the medium of exchange and unit of account within the economy.[2][3] A chief measure of price inflation is the inflation rate, the annualized percentage change in a general price index (normally the consumer price index) over time.[4] The opposite of inflation is deflation. History[edit] Annual inflation rates in the United States from 1666 to 2004. Historically, infusions of gold or silver into an economy also led to inflation. The adoption of fiat currency by many countries, from the 18th century onwards, made much larger variations in the supply of money possible. Related definitions[edit] Measures[edit] Other common measures of inflation are: Effects[edit] where

Global governance Global governance or world governance is a social movement toward political integration of transnational actors aimed at solving problems that affect more than one state or region when there is no power of enforcing compliance. The modern question of world governance exists in the context of globalization. In response to the acceleration of interdependence on a worldwide scale, both between human societies and between humankind and the biosphere, the term "world governance" may also be used to designate laws, rules, or regulations intended for a global scale. Definition[edit] In a simple and broad-based definition of world governance, the term is used to designate all regulations intended for organization and centralization of human societies on a global scale.[1] Traditionally, government has been associated with "governing," or with political authority, institutions, and, ultimately, control. Usage[edit] Context[edit] Need[edit] Crisis of purpose[edit] World government[edit] Issues[edit]

Government debt Government debt (also known as public debt, national debt and sovereign debt)[1][2] is the debt owed by a central government. (In federal states, "government debt" may also refer to the debt of a state or provincial, municipal or local government.) By contrast, the annual "government deficit" refers to the difference between government receipts and spending in a single year, that is, the increase of debt over a particular year. Government debt is one method of financing government operations, but it is not the only method. Governments can also create money to monetize their debts, thereby removing the need to pay interest. As the government draws its income from much of the population, government debt is an indirect debt of the taxpayers. History[edit] The sealing of the Bank of England Charter (1694) During the Early Modern era, European monarchs would often default on their loans or arbitrarily refuse to pay them back. Government and sovereign bonds[edit] By country[edit] Risk[edit] U.S.

Balance of trade The commercial balance or net exports (sometimes symbolized as NX), is the difference between the monetary value of exports and imports of output in an economy over a certain period, measured in the currency of that economy. It is the relationship between a nation's imports and exports.[1] A positive balance is known as a trade surplus if it consists of exporting more than is imported; a negative balance is referred to as a trade deficit or, informally, a trade gap. The balance of trade is sometimes divided into a goods and a services balance. Understand- Balance of Trade[edit] Trade, in general connotation, means the purchase and sales of commodities. Policies of early modern Europe are grouped under the heading mercantilism. Definition[edit] The balance of trade forms part of the current account, which includes other transactions such as income from the net international investment position as well as international aid. Factors that can affect the balance of trade include:

Stock market Size of market[edit] Stocks are partitioned in various ways. One common way is by the country where the company is domiciled. For example, Nestle, Roche, and Novartis are domiciled in Switzerland, so they are part of the Swiss stock market. The size of the world stock market was estimated at about $36.6 trillion at the beginning of October 2008.[1] The total world derivatives market has been estimated at about $791 trillion face or nominal value,[2] 11 times the size of the entire world economy.[3] The value of the derivatives market, because it is stated in terms of notional values, cannot be directly compared to a stock or a fixed income security, which traditionally refers to an actual value. Stock exchanges[edit] Stocks are listed and traded on stock exchanges which are entities of a corporation or mutual organization specialized in the business of bringing buyers and sellers of the organizations to a listing of stocks and securities together. Trade[edit] Market participants[edit]