Mr. President, Put it in Writing 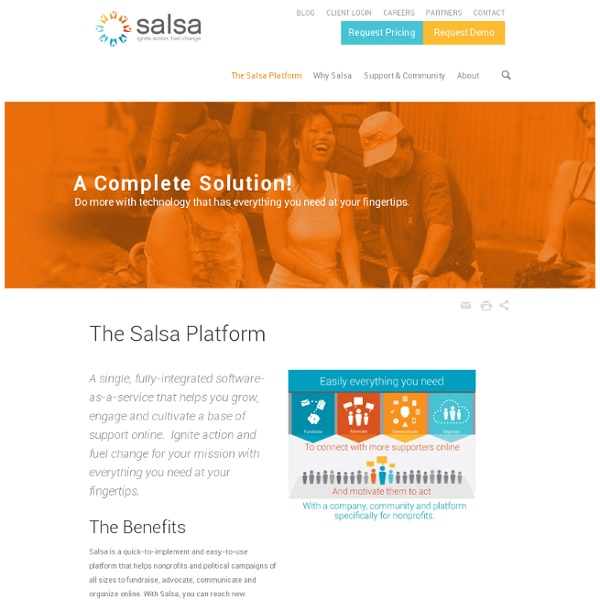 Services The Salsa Client Services team handles all new client set-ups as well as custom projects such as data clean-up, large-scale content and campaign migration, webpage customization and custom reporting. For more services including everything from strategic consulting to development, we have a community of partners ready to help too. Support The folks in support help you be successful in Salsa in a friendly, clear and efficient manner. You can count on the support specialists to ask you questions to target the specific problem and determine how to best address your concerns. Training We provide weekly online training, certification courses and strategic best practices webinars and resources at a variety of levels so you can customize your education the way you need it.

The Historic Records Show that Nuclear Authorities Know the Fallacy of their Current Position In progress. This post compares the situation as documented by Dennis Heyden last post – that evidence showing a multiplier effect for internal emitters compared to external exposure readings is dismissed – with the early record which for the first time proved the multiplier effect does indeed exist. The very grave observations held by expert researchers made of the actions specific to internal emitters have not be contradicted by any later observations.

Illinois is America’s nuclear waste capital Nuclear power plants across the U.S. have nowhere to send their spent fuel, so they’re storing it on site in ever-growing radioactive piles. Bloomberg reports that no state is home to more of that nuclear waste than Illinois: About 13 percent of America’s 70,000 metric tons of the radioactive waste is stashed in pools of water or in special casks at the atomic plants in Illinois that produced it, according to the Nuclear Energy Institute, a Washington-based industry group.

Tell Stephen Harper: Nuclear Polluters Must Pay Prime Minister Stephen Harper has proposed a new law to shield nuclear companies from taking responsibility in the event of a nuclear accident. This law is irresponsible and must change. The Fukushima disaster shows us why. Tens of thousands of people are still displaced 3 years after the Fukushima accident. Their livelihoods demolished, they’ve received but a fraction of the money needed to replace what they have lost.

Koch Brothers Poised to Raise Influence With Massive Conservative Database - The ITT List David and Charles Koch—billionaire brothers and infamous figureheads of libertarian activism—are set to further certify their status as lynchpins of the Republican electoral machine. As the Guardian reports, the two oil moguls are creating a database that unites far-flung conservative think tanks, activist groups, tea party organizations, fundraising gurus and free market ideologues into a comprehensive list likely to make GOP campaign managers salivate in advance of next year’s elections. Named Themis—after the Greek goddess who imposed divine order on humanity—the database will include valuable information for conservative organizers and fundraisers. Email lists, phone numbers and other contact information from disperse sources will merge into a comprehensive and streamlined political weapon. Purportedly, the database will also include extensive information relating to occupation and income levels, useful details for targeted fundraising initiatives.

Fracking Chemical Disclosure Database Provides New Tool in Fight Against Drilling EcoWatch Today, SkyTruth released a database created from more than 27,000 industry reports on the chemicals used in hydraulic fracturing, or “fracking.” The data were extracted from chemical disclosure reports submitted by industry to FracFocus.org, for gas and oil wells fracked between January 2011- August 2012. The SkyTruth Fracking Chemical Open Database is the first free resource enabling research and analysis of the chemicals used in fracking operations nationwide, and is available now for download from SkyTruth.org. India's nuclear watchdog finds faulty valves in Kudankulam plant South | Reported by Pallava Bagla, Edited by Ashish Mukherjee | Updated: April 20, 2013 10:27 IST New Delhi: For the very first time, India's nuclear watchdog, the Atomic Energy Regulatory Board (AERB), has indicated that faulty parts have been found at the Kudankulam nuclear power plant. The problematic valves are being replaced, said officials. The Department of Atomic Energy, which reports to the Prime Minister, has been insisting that the nuclear facility in coastal Tamil Nadu is safe and ready to be commissioned in weeks. Protesters, including local fishermen and villagers who have campaigned long and hard against the nuclear plant, have repeatedly shared their concern that sub-standard equipment has been installed at the facility. The AERB confirms that "performance of four valves of a particular type were found to be deficient".

Help stop A Global Mobile Chernobyl! A group of politicians and businesspeople are developing a plan to build an international high-level nuclear waste dump in South Australia--a nation that has no commercial nuclear reactors. The plan is strongly opposed by many South Australians and by an overwhelming majority of Aboriginal people, who own the land. The Australian Nuclear Free Alliance, representing Aboriginal people from across Australia, calls on nuclear nations NOT to dump nuclear waste in Australia. The nuclear industry has a track record of Aboriginal dispossession and environmental pollution--from atomic bomb tests to uranium mining to nuclear waste dump proposals. NIRS is supporting our friends in Australia and we hope you, and your organization, will too, by signing on to a petition of support by going here.

Ghostly protests against Northern Territory uranium mining Ten people dressed as spectres protested outside Energy Resources of Australia’s head office in Darwin yesterday, in opposition of plans to expand uranium mining in the Northern Territory. As Australian Mining reported yesterday, Energy Resources of Australia say a new uranium mine in the Northern Territory will play an important role in future energy needs. The company is seeking approval for the proposed Ranger 3 Deeps underground uranium mine. The miner has also allocated $57 million for a prefeasibility study into the development of the underground mine. However, environmentalists say they do not want the mine to go ahead near Kakadu National Park.

Maybe because slow money is like slow food ? Another way to buy, another development. ;) by alwen Jun 19

Hi, could you please explain why this teem is called "Slow Money"? I can't find the relationship with the Slow Money movement (www.slowmoney.org). Seems misleading. by raphaels Jun 19