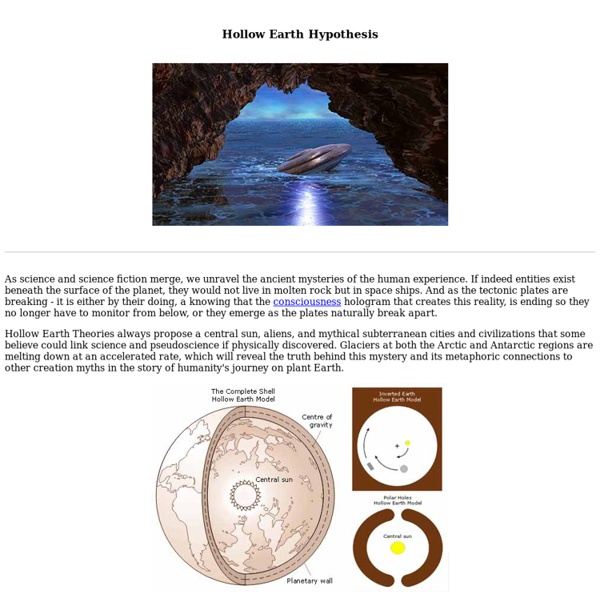 Hollow Earth Hypothesis As science and science fiction merge, we unravel the ancient mysteries of the human experience. If indeed entities exist beneath the surface of the planet, they would not live in molten rock but in space ships. And as the tectonic plates are breaking - it is either by their doing, a knowing that the consciousness hologram that creates this reality, is ending so they no longer have to monitor from below, or they emerge as the plates naturally break apart. Hollow Earth Theories always propose a central sun, aliens, and mythical subterranean cities and civilizations that some believe could link science and pseudoscience if physically discovered. Glaciers at both the Arctic and Antarctic regions are melting down at an accelerated rate, which will reveal the truth behind this mystery and its metaphoric connections to other creation myths in the story of humanity's journey on plant Earth. Underground civilizations link with the 'Hollow Earth Theory'. Early History Gravity

Creative Destruction: Think like a Forest! The phrase “creative destruction” has become a common one as economies and nations struggle to adjust in the aftermath of the Crash of ’08. It was Joseph Schumpeter who coined the expression to describe the workings of capitalism, and citations of the maverick economist seem to have soared in recent years. Schumpeter himself has been called a “living contradiction”, oscillating as he did between the twin poles of political economy – history and theory. In the early years of the 20th Century, a great battle was fought between the two. Theory won, leading eventually to the emergence in America of neoclassical economics, with its emphasis on equilibrium and the use of abstract models to study the real economy. Schumpeter refused to reconcile himself to this outcome and all his life he fought against what he called the “Ricardian Vice”, the tendency of neoclassical economists to mistake their models for reality.

Genetic Research on the Ancient Basques Yields Unexpected Results - Cayce's Atlantean History is Viable from EdgarCayce Website Spanish version The Cayce readings relate that a migration of Atlanteans fled the final destruction of their last remaining island just prior to 10,000 B.C. Cayce specifically stated that many of these survivors went to North America, Egypt, and the Pyrenees Mountains while a few went to the area of the Gobi. The Basques, who have long inhabited the area of the Pyrenees, are an enigma to researchers. Archaeologists have consistently speculated that the Basques moved into the region from southwestern Europe between 13,000 B.C. and 8,000 B.C.

Jerry Gross - The Out-of-Body Experience By Kevin Williams Jerry Gross is a leader in the field of out-of-body explorations. As a well known out-of-body teacher and practitioner, he holds workshops on astral projection in the United States and abroad. Jerry began having spontaneous out-of-body experiences in early childhood. As he grew older, he developed ways to court these experiences, to invite them with greater frequency.

Redheaded Pharaoh Ramesses II Pharaoh Ramesses II (of the 19th Dynasty), is generally considered to be the most powerful and influential King that ever reigned in Egypt. He is one of the few rulers who has earned the epithet "the Great". Subsequently, his racial origins are of extreme interest. In 1975, the Egyptian government allowed the French to take Ramesses' mummy to Paris for conservation work. Numerous other tests were performed, to determine Ramesses' precise racial affinities, largely because the Senegalese scholar Cheikh Anta Diop, was claiming at the time that Ramesses was black.

Has Joseph’s Tomb Been Found in Egypt? by Thomas S. McCall, Th.D. Dr. Thomas McCall, the Senior Theologian of our ministry, has written many articles for the Levitt Letter. He holds a Th.M. in Old Testament studies and a Th.D. in Semitic languages and Old Testament. Quantum Light Breath What is the Quantum Light Breath? The Quantum Light Breath is a highly focused breathing meditation process that greatly accelerates the user’s personal transformation by bypassing the conscious mind and releasing old programs directly from the subconscious. It basically eliminates the need for analysis, painful emotional experiences, years of therapy or growth groups and unfruitful meditations. It usually takes the user into an expanded state of consciousness. Musings from the Chiefio 10 Commandments Movie Poster with Yul Brynner Original Image It just wouldn’t have been the same with a Redhead like, oh, Conan O’Brien playing the Pharaoh… but might have been more authentic. OK, I’m finding this out a bit late. Most of the articles have a date stamp of a year ago, some even older. So if you already know this, please forgive… but I didn’t know it… so it’s all new to me, and a bit “odd”…

9-2 (2003): Visualization in Medieval Alchemy Barbara Obrist* Abstract: This paper explores major trends in visualization of medieval theories of natural and artificial transformation of substances in relation to their philosophical and theological bases. The function of pictorial forms is analyzed in terms of the prevailing conceptions of science and methods of transmitting knowledge. The documents under examination date from the thirteenth to the fifteenth century. In these, pictorial representations include lists and tables, geometrical figures, depictions of furnaces and apparatus, and figurative elements mainly from the vegetable and animal realms. The Only Ancient Jewish Hair Ever Found This article was originally published on Dr. James Tabor’s popular Taborblog, a site that discusses and reports on “‘All things biblical’ from the Hebrew Bible to Early Christianity in the Roman World and Beyond.” Bible History Daily republished the article with consent of the author. Visit Taborblog today, or scroll down to read a brief bio of James Tabor below. The braided hair of a Jewish woman was found at Masada but until recently, no example of preserved hair from a Jewish male had ever been found from the late 2nd Temple period. This discovery is one of the many fascinating, but less publicized, finds of the 1st-century “Tomb of the Shroud,” discovered in the summer of 2000 just outside the Old City of Jerusalem.