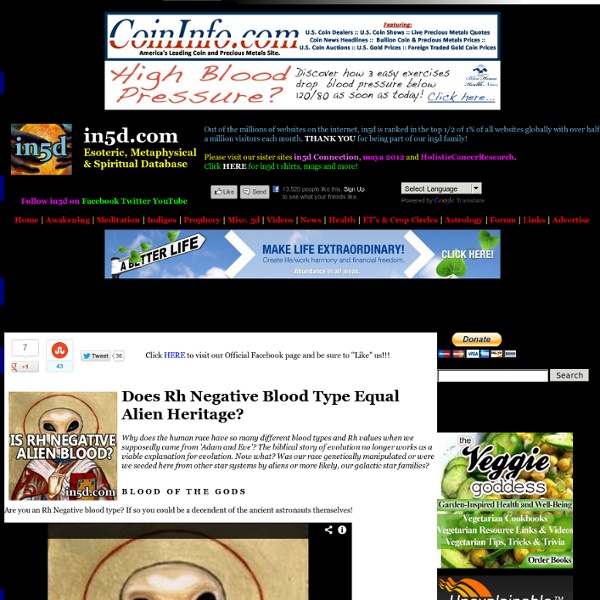 Last updated on January 30, 2010 at 9:00 am EDT by in5d Alternative News * Visit in5D Connection where you can find your soul mate or join one of our amazing groups. EVERYONE is welcome! Why does the human race have so many different blood types and Rh values when we supposedly came from 'Adam and Eve'? The biblical story of evolution no longer works as a viable explanation for evolution. Now what? Are you an Rh Negative blood type? About a year and a half ago my sister Bonnie and I were discussing some of the unusual characteristics of our family. We were raised in the church, but we never received answers to the questions we asked. For the past decade many people have been working to prove that the earth has been visited by extraterrestrial beings. If earth was visited in the ancient past, are there any descendants of these visitors? Many scientists believe that modern man evolved from ape-like primates. Leave a Comment on YouTube Could the Basque people be one of these colonies? source Related:  Mysteries, Ancient Civilizations, and Forbidden Archaeology • New World Order

Yahweh, ETs, Israelites, and Bloodlines Jerusalem And did those feet in ancient time Walk upon England’s mountains green? And was the holy Lamb of God On England’s pleasant pastures seen? And did the Countenance Divine Shine forth upon our clouded hills? And was Jerusalem builded here Among these dark satanic mills? Bring me my bow of burning gold! Bring me my arrows of desire! Bring me my spear! Bring me my chariot of fire! I will not cease from mental fight, Nor shall my sword sleep in my hand, Till we have built Jerusalem In England’s green and pleasant land. This is a most curious poem, by William Blake. One theory which indicates a possibility of more literal interpretation of this poem is British Israelism. One writer, Betty Rhodes, is a proponent of this view, with her own theories about the true identity of Western European peoples as having an origin in the Ancient Hebrews. Rhodes believes that the Western European populations are what Old Testament prophecy refers to as the Ephraim, or descendants of the Israelites. Low pulse rate

Senate Bill S.510 Passed… Quickly Explained | askmarion Senate Bill S510 Explained… Sort of… 1. It puts all US food and all US farms under Homeland Security and the Department of Defense, in the event of contamination or an ill-defined emergency. It resembles the Kissinger Plan. 2. It would end US sovereignty over its own food supply by insisting on compliance with the WTO, thus threatening national security. COMPLIANCE WITH INTERNATIONAL AGREEMENTS. 3. 4. 5. 6. 7. 8. 9. 10. S 510, the Food Safety Modernization Act*, may be the most dangerous bill in the history of the US. 15 GOP senators help Democrats Kill Constitution In a stunning expansion of the power of unelected bureaucrats to control the population, the U.S. Not a single Democrat voted against the ominous measure, which was first submitted by ‘Little Dick’ Durbin, D-Illinois. While the vast majority of Republicans voted against this assault on the Constitution, 15 broke ranks and helped Obama and the Leftwing Democrats that presently run Congress seize control over the food supply.

Mitochondrial DNA Analysis - Modern Genetic Research Confirms Cayce's Story This Section Adapted From 'Mound Builders - Edgar Cayce's Forgotten History of Ancient America' from EdgarCayce Website Spanish version DNA analysis on Native Americans began in the 1980s, but with rapid technological improvements, research intensified in the early 1990s. Several teams of genetics researchers at prominent American universities have been conducting numerous studies. At that point it was found that a small percentage of modern Native Americans have an unusual type of DNA then known to exist only in a few locations in Europe and the Middle East. However, in July 2001, this unique gene was also found in a small tribe living in the northern Gobi Desert area. The DNA research initially seemed to promise solid proof of not only where the ancient Americans came from, but also when they came. Most of the DNA research on Native American Indians has been done utilizing mitochondria. Mitochondrial DNA (usually abbreviated as mtDNA) is passed to offspring only through the egg. Gobi

Redheaded Pharaoh Ramesses II Pharaoh Ramesses II (of the 19th Dynasty), is generally considered to be the most powerful and influential King that ever reigned in Egypt. He is one of the few rulers who has earned the epithet "the Great". Subsequently, his racial origins are of extreme interest. In 1975, the Egyptian government allowed the French to take Ramesses' mummy to Paris for conservation work. Professor P. Balout and Roubet were under no illusions as to the significance of this discovery, and they concluded as follows: "After having achieved this immense work, an important scientific conclusion remains to be drawn: the anthropological study and the microscopic analysis of hair, carried out by four laboratories: Judiciary Medecine (Professor Ceccaldi), Société L'Oréal, Atomic Energy Commission, and Institut Textile de France showed that Ramses II was a 'leucoderm', that is a fair-skinned man, near to the Prehistoric and Antiquity Mediterraneans, or briefly, of the Berber of Africa." Afrocentrism Bibliography

PROOF of 1400+ ELITE resignations, mass arrests, retirements I've noticed that some non-conspiracy factists are finding this. That's great! Welcome to the wide world of conspiracism, illusion, lies, and truth.... Unfortunately this information may be over your head. It is an spreadsheet of details of elite leaders leaving their posts, the number is at about 1400 right now. HOW DID I (primary author) KNOW WHO'S ELITE AND WHO'S NOT? Having said that, I also think that there are some very obvious and undeniable people/positions on this spreadsheet, such as politicians, CEOs, presidents, and top executives of famous corporations, top journalists & CEOs of media, bankers, corrupt religious leaders, premiers, prime ministers, queens, princesses, cabinets, and those involved with money scandals, phone scandals, swiss banks, pharmaceutical companies, etc. Be aware that many people might just be CEOs, designers, or university deans (etc.) by coincidence, just because they earned that spot and wanted it. Oh, just a side note. Also see: That's just my theory.

Col. Billie Faye Woodard: Traveler to the Inner Earth (Repost) Here is a repost of an article by Billie Woodard. This is the gentleman that Mike Quinsey has said he’ll be sharing his gifted funds with. On Dec. 31, 2010, SaLuSa said: “You will hear more about those souls that reside in the Inner Earth, that you know as the Agarthans. Thanks to Julie R. Col. Below is an incredible first-hand account from a US Air Force Colonel about the inside of our Planet [courtesy abovetopsecret.com/onelight.com.] This information was gathered and written down with permission, from a recording taken on the phone January 10, 2002 (Greg Gavin/Onelight.com): My name is Colonel Billie Faye Woodard of the United States Air Force. Arrival and Indoctrination I was first stationed at Area 51, Nevada, Jan.28, 1971 through 1982. Immediately on my arrival to Area 51, I was made aware of the tunnels and all the workings of the facility itself. My father had been stationed at Roswell. I have an unknown blood type. Area 51

Bentwaters1980 Forum - Hy Brasil Hy Brasil the ‘other’ Atlantis It is undisputed that the most famous ‘lost island’ is Atlantis. But there is another island which is just as mysterious called Hy-BrasilThe island is said to be located to the west of Ireland and is known as Hy-Brasil in Irish mythology.." Hy-Brasil is known by various names: Also called Bersil, Brazir, O'Brasil, O'Brassil, Breasil, Brasylle, Hy-Brazil, or Hi-Brasil. In his book "Ireland - A Journey Into Lost Time", P.A. According to legends of long ago, Hy-Brasil was a secret land once ruled by priests. The island is said to be cloaked in mist, except for one day each seven years, when it became visible but could still not easily be reached.Over the centuries a number of maps have charted the position of the island. A Catalan map from around 1480 labels two islands “Illa de brasil”, one to the south west of Ireland and the other south of “Illa verde” or what is now known as Greenland. The 1600′s had a wealth of reports about the island.

ISIS : A CIA Creation to Justify War Abroad and Repression at Home Through terrifying headlines and shocking videos, ISIS is being used as a tool to justify war in the Middle East and to cause fear and panic worldwide. No, this is not a “crazy conspiracy theory”, it is simply the oldest trick in the book. ISIS was created by the very forces that are fighting it. Ever since the creation of democratic nations – where public opinion somewhat matters – the political class is faced with a dilemma: War is needed to gain power, riches, and control, but the general public has a tendency to be against it. What to do? The answer was found decades ago and is still used successfully today: Create an enemy so terrifying that the masses will beg their government to go to war. This is why ISIS exists. About a decade after the invasion of Iraq (which is still a chaotic danger zone), most agree that the war was based on false premises. Alarmist headlines and dramatic pictures help stir up feelings of anger from the Western world. The outcry was immediate. In Conclusion