Cro-Magnon/Atlanteans colonised America. The Indian Sage who developed Atomic Theory 2,600 years ago. John Dalton (1766 – 1844), an English chemist and physicist, is the man credited today with the development of atomic theory. 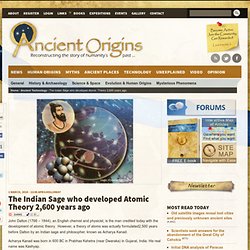 However, a theory of atoms was actually formulated2,500 years before Dalton by an Indian sage and philosopher, known as Acharya Kanad. Acharya Kanad was born in 600 BC in Prabhas Kshetra (near Dwaraka) in Gujarat, India. His real name was Kashyap. Kashyap was on a pilgrimage to Prayag when he saw thousands of pilgrims litter the streets with flowers and rice grains, which they offered at the temple. Baltic Anomaly: Far Stranger Than Any UFO Discovery. The Sphinx – Where Ra landed. The God Ra of the ancient Egyptians is said to have sailed down from the stars and landed in Egypt, founding a powerful civilization. 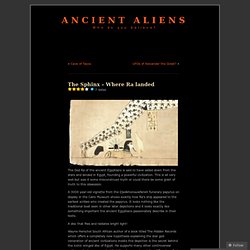 This is all very well but was it some misconstrued myth or could there be some grain of truth to this obsession. A 3000 year-old vignette from the Djedkhonsuiefankh funerary papyrus on display in the Cairo Museum shows exactly how Ra’s ship appeared to the earliest scribes who created the papyrus. It looks nothing like the traditional boat seen in other later depictions and it looks exactly like something important the ancient Egyptians passionately describe in their texts. A disc that flies and radiates bright light! Azores Underwater Pyramid Discovered - ancient Atlantis civilization Azores Islands.

Reports of Underwater Pyramid off the Coast of Terceira Island. Ancient Origins seeks to uncover, what we believe, is one of the most important pieces of knowledge we can acquire as human beings – our beginnings. 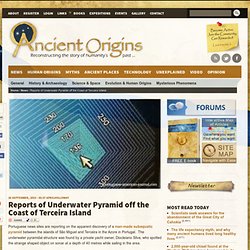 Come with us on a journey to explore lost civilisations, sacred writings, ancient places, unexplained artefacts and scientific mysteries while we seek to reconstruct and retell the story of our beginnings. Ginger. The naturally preserved body of an adult man was found in a cemetery at Gebelein, Egypt, and dated to the Late Predynastic period, around 3400 BC, or earlier. 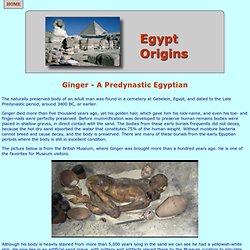 Ginger died more than five thousand years ago, yet his golden hair, which gave him his nick-name, and even his toe- and finger-nails were perfectly preserved. Before mummification was developed to preserve human remains bodies were placed in shallow graves, in direct contact with the sand. The bodies from these early burials frequently did not decay, because the hot dry sand absorbed the water that constitutes 75% of the human weight. Without moisture bacteria cannot breed and cause decay, and the body is preserved. Half Of Europeans Share King Tut's DNA ... Royal Egyptian Bloodlines. (Before It's News) THE FLOW OF PERCEPTIONS : Global, Military, New World Order theflowofperceptions.blogspot.co.uk/ THE UNKNOWN MOMENT : UFO, Crop Circles, Quantum Physics, Spiritual Science theunknownmoment.blogspot.co.uk/ 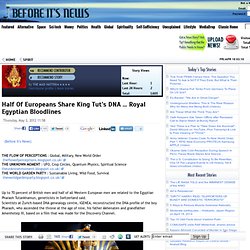 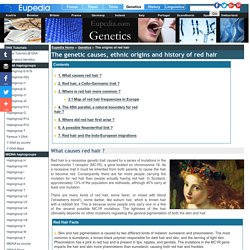 Red hair is a recessive genetic trait caused by a series of mutations in the melanocortin 1 receptor (MC1R), a gene located on chromosome 16. As a recessive trait it must be inherited from both parents to cause the hair to become red. Consequently there are far more people carrying the mutation for red hair than people actually having red hair. In Scotland, approximately 13% of the population are redheads, although 40% carry at least one mutation. There are many kinds of red hair, some fairer, or mixed with blond ('strawberry blond'), some darker, like auburn hair, which is brown hair with a reddish tint. 25,000 Year Old Buildings Found In Russia? The Mysterious Dolmens And Megaliths Of The Caucasus. (Before It's News) In Russia, in the Caucasus mountains, not far from the cities Tzelentzchik, Touapse, Novorossiysk and Sochi, there are hundreds of megalithic monuments. 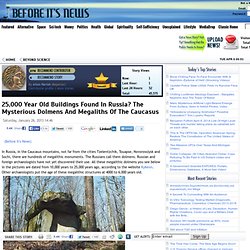 The Russians call them dolmens. Russian and foreign archaeologists have not yet discovered their use. All these megalithic dolmens you see below in the pictures are dated from 10,000 years to 25,000 years ago, according to the website Kykeon. Other archaeologists put the age of these megalithic structures at 4000 to 6,000 years old. Atlantis, Egypt, and Ireland? By Heather Elizabeth Adams | book-of-thoth.com The Story of Princess Scota In 1955, archaeologist Dr. 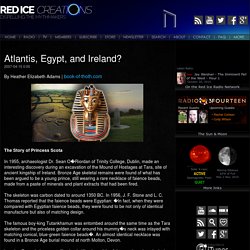 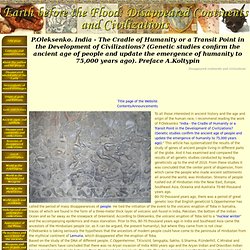 (Genetic studies confirm the ancient age of people and update the emergence of humanity to 75,000 years ago). " This article has systematized the results of the study of genes of ancient people living in different parts of the globe. And it has examined and compared the results of all genetic studies conducted by leading geneticists up to the end of 2010. From these studies it was concluded that the center point of dispersion, from which came the people who made ancient settlements all around the world, was Hindustan. 1) The Aryan invasion of India and Iran is still a historical reality.

Soma among the Armenians, Ethnobotany, Anthropology, Armenian Mythology, Vahagn, Mithra, Mushrooms, Amanita, Iranian Mythology. By Robert Bedrosian Download in zip format soma.zip; pdf format soma.pdf Footnotes Page opens in separate window. [1] Soma was a god, a plant, and an intoxicating beverage. It is referenced in some 120 of 1028 verses of the Indian Rig Veda (mid second millenium B.C.). Haoma was its Iranian counterpart. The Tribe of Dan is the Irish & Denmark.

The Tribe of Dan are the Danes (Denmark) and the Irish by Peter Salemi The Patriarch Dan was born from the handmaid of Rachel, Bilhah. 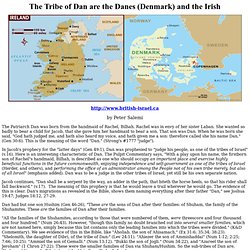 Rachel was in envy of her sister Laban. She wanted so badly to bear a child for Jacob, that she gave him her handmaid to bear a son. That son was Dan. The Hebrew Sources Of Northern Tongues. [adapted from “The Tribes” by Yair Davidiy] TERRY MARVIN BLODGETT in 1981(c) published a Ph.D. thesis (“Phonological Similarities in Germanic and Hebrew”, The University of Utah, 1981) in which he proved that the original tongue of the northern “Barbarians” who overran Europe was Hebrew. These peoples are commonly referred to as “Germanic” since some of them had sojourned at one stage in Germany and their language had been adopted by the German “natives”. The peoples in question however had little real connection to the present day inhabitants of the area of Germany. Blodgett, now Professor of Languages, Southern Utah University, Cedar City, Utah, USA, showed how it is academically accepted that approximately one-third of all “Germanic” vocabulary is of an unknown (non -Indo-European) origin.

There were also other linguistic features that need explanation such as certain peculiarities in the rules of pronunciation: The Dragon Court - La Corte del Dragón. New work casts doubt on Out of Africa theory - Archaeology News from Past Horizons. Article created on Tuesday, December 28, 2010 Teeth found near Rosh Ha’ayin, Israel, have been dated older than any other homo sapiens previously uncovered in Africa. Until now, remains of humans from only 200,000 years ago have been found in Africa, and the accepted approach has been that modern man originated on that continent. The cave was uncovered in 2000 by Prof. Avi Gopher and Dr. Ran Barkai of Tel Aviv University (TAU) Institute of Archaeology. The History of the Red Haired Race - Tuatha De Danaan. By Mary Sutherland from BurlingtonNews Website Spanish version In the Takla Makan Desert in central Asia, mummies of non-Asian peoples were found. The mummies are dated to be 3,800 years old.

RH Negative - Annunaki, Atlantis, Lemuria, Egypt ~2013 ~ Bashar. From Transylvania to Tunbridge Wells - Chapter 2. Scythians and Druids The Tocharians depicted in the cave shrines of Takla Makan are red haired and wear the same conical hat, sometimes called a Phrygian cap. A variant of this was worn by Mithras, the intermediary god adopted by the Persians and featured in the Indian pantheon of the Asuras. In monarchical dualism he is depicted as balancing the forces of increase and decrease, represented by the gods Ahura Mazda and Ahriman and some classical authors identified him with Jesus Christ. His headgear is also depicted as the hat worn by gnomes and dwarves.

AUM~Sparky's Edgar Cayce on the Mound Builders! The Bloodlines of the Dragon: Introduction. The following is the introduction to the book The Bloodlines of the Dragon that is to be published shortly. It also serves as an admirable introduction to the Dragon Court itself. Human Giants. The Story Behind The Story. Here’s yet another update to “Forbidden Archeology” in America: March of the Titans. Celtic Folklore: The People of the Mounds. A theory of fae ancestry ... - Faeries - tribe.net. The truth about the Picts - Science - News. MEMORIES OF ENKI & THE ANUNNAKI - Estelle Nora Harwit Amrani.

In the early 1970's I began having telepathic communication with this particular group of Lyrans and Sirians. I channeled a children's play called "The Visitors" on the request of a community center where I worked. MEMORIES OF ENKI & THE ANUNNAKI - Estelle Nora Harwit Amrani. The Only Ancient Jewish Hair Ever Found. This article was originally published on Dr. Has Joseph’s Tomb Been Found in Egypt? By Thomas S. McCall, Th.D. Dr. Genetic Research on the Ancient Basques Yields Unexpected Results - Cayce's Atlantean History is Viable. From EdgarCayce Website Spanish version The Cayce readings relate that a migration of Atlanteans fled the final destruction of their last remaining island just prior to 10,000 B.C.