Bones from Pacific island likely those of Amelia Earhart. If true, the findings would finally solve a mystery that has fascinated generations since Earhart disappeared while attempting to fly around the world in 1937. 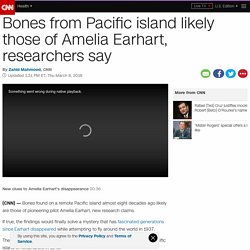 Amelia Earhart - First Female Transatlantic Flight. National Archives Photo - Does It Depict Amelia Earhart? Families of missing trapped between grief and hope. The trauma faced by family when an aircraft or boat ''disappears without trace'' is one of the most extreme experienced, psychologists say. 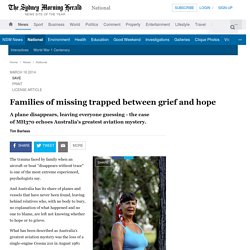 And Australia has its share of planes and vessels that have never been found, leaving behind relatives who, with no body to bury, no explanation of what happened and no one to blame, are left not knowing whether to hope or to grieve. What has been described as Australia's greatest aviation mystery was the loss of a single-engine Cessna 210 in August 1981 The plane was flying from Queensland to Sydney and on board were four Sydney men - Noel Wildash, 42; Sydney Water Police deputy chief Ken Price, 54; Rhett Bosler, 33; and Philip Pembroke, 43 and pilot, Michael Hutchins, 52. The plane is thought to have plunged into the impenetrable bush of Barrington Tops and, despite numerous searches, has never been found. Yvonne Pembroke was aged 30 and seven weeks pregnant with Philip Pembroke's son, also to be called Philip, when the aircraft was lost. Beyond the Bermuda Triangle: The Devil's Sea. Mysterious waters: from the Bermuda Triangle to the Devil's Sea.

Sea monsters have been blamed for unexplained maritime disappearances. 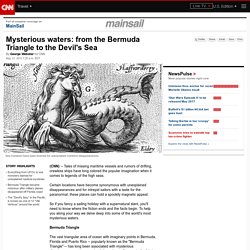 Everything from UFOs to sea monsters blamed for unexplained nautical mysteriesBermuda Triangle became notorious after military planes disappeared off Florida coastThe "Devil's Sea," in the Pacific, is known as one of 12 "Vile Vortices" around the world (CNN) -- Tales of missing maritime vessels and rumors of drifting, crewless ships have long colored the popular imagination when it comes to legends of the high seas.

Certain locations have become synonymous with unexplained disappearances and for intrepid sailors with a taste for the paranormal, these places can hold a spookily magnetic appeal. So if you fancy a sailing holiday with a supernatural slant, you'll need to know where the fiction ends and the facts begin. To help you along your way we delve deep into some of the world's most mysterious waters. Bermuda Triangle. Mysterious Shipwreck Reveals how the Spanish Built Their Boats. A sunken ship discovered during a search for the real Captain Morgan turns out to be a treasure trove of archaeological artifacts. 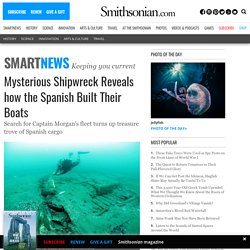 Back in 2011, a team of underwater archaeologists hunting for the fleet of infamous pirate and rum mascot Captain Henry Morgan when they discovered a remarkably well preserved wreck off the coast of Panama. Four years later, researchers have finally identified the mysterious wreck as the Spanish merchant vessel Nuestra Señora de Encarnación. According to archaeologists from Texas State University, the Encarnación was part of Spain’s Tierre Firma fleet, which was critical for maintaining trade routes between its colonies in the New World. Is this Captain Henry Morgan's ship hull? 500 year old rum? Archaeologists search for the real Captain Morgan.

To life, love and a legendary privateer’s lost fleet. 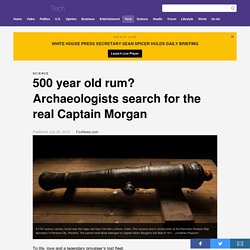 U.S. archaeologists are continuing their search for real-life buccaneer Captain Henry Morgan’s lost fleet after the discovery of six cannons, a 17th century wooden shipwreck and even a barrel that may very well contain rum. Yo, ho ho indeed. Aptly backed by the Captain Morgan rum brand, a team of leading archaeologists led by Frederick “Fritz” Hanselmann of Texas State University hope to unlock the myth and mysteries of one of history’s most iconic sea captains. [pullquote] Was King Arthur a real person? - Ask History. My TV provider is not listed. 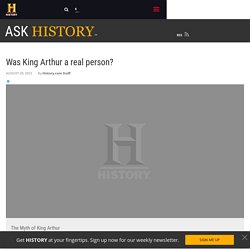 Why not? We are currently working on adding more TV providers. Please check back frequently to see if your TV provider has been added. Why do I need to log in to watch some video content? Viewers who verify their subscription to a TV provider get access to a deeper catalog of video content, including more full episodes. Top 10 clues to the real King Arthur. The King Arthur we know is one of romance, ephemera and myth. 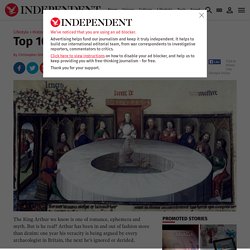 But is he real? Arthur has been in and out of fashion more than denim: one year his veracity is being argued by every archaeologist in Britain, the next he's ignored or derided. In Revealing King Arthur: Swords, Stones and Digging for Camelot, Christopher Gidlow shows how archaeologists over the last 50 years have interpreted the evidence from Dark Age Britain. At first they were happy to link their discoveries to legendary names. Then came a backlash, when Arthurian links were ignored or derided. 1. What Was Behind Mysterious Collapse of the Mayan Empire? The city states of the ancient Mayan empire flourished in southern Mexico and northern Central America for about six centuries. 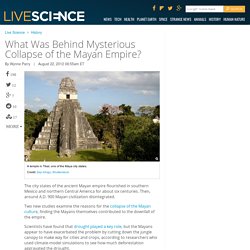 Then, around A.D. 900 Mayan civilization disintegrated. Two new studies examine the reasons for the collapse of the Mayan culture, finding the Mayans themselves contributed to the downfall of the empire. Scientists have found that drought played a key role, but the Mayans appear to have exacerbated the problem by cutting down the jungle canopy to make way for cities and crops, according to researchers who used climate-model simulations to see how much deforestation aggravated the drought. Prehistoric Van Goghs: Artists Used Pointillism 38,000 Years Ago Nineteenth-century artists, such as Georges Seurat and Vincent van Gogh, weren't the first to use pointillism, according to a discovery of 38,000-year-old decorated limestone tablets in France. 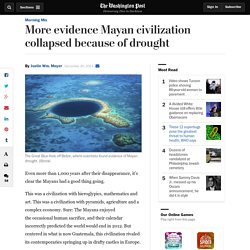 (iStock) Even more than 1,000 years after their disappearance, it’s clear the Mayans had a good thing going. This was a civilization with hieroglypics, mathematics and art. This was a civilization with pyramids, agriculture and a complex economy. Sure: The Mayans enjoyed the occasional human sacrifice, and their calendar incorrectly predicted the world would end in 2012. Then, sometime around 900 A.D., Mayan society collapsed. Collapse: The Maya. The ancient Maya once occupied a vast geographic area in Central and South America. 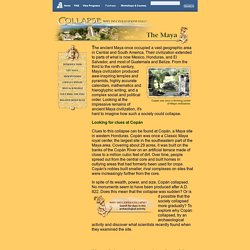 Their civilization extended to parts of what is now Mexico, Honduras, and El Salvador, and most of Guatemala and Belize. From the third to the ninth century, Maya civilization produced awe-inspiring temples and pyramids, highly accurate calendars, mathematics and hieroglyphic writing, and a complex social and political order. Looking at the impressive remains of ancient Maya civilization, it's hard to imagine how such a society could collapse. Looking for clues at Copán. Why Did the Mayan Civilization Collapse? A New Study Points to Deforestation and Climate Change.

Bustling Mayan cities such as Tikal, in present-day Guatemala, were likely abandoned due to a combination of deforestation and drought. Photo via Wikimedia Commons/Shark It’s long been one of ancient history’s most intriguing mysteries: Why did the Maya, a remarkably sophisticated civilization made up of more than 19 million people, suddenly collapse sometime during the 8th or 9th centuries?

Khanacademy. Great Serpent Mound. Who Built the Great Serpent Mound? The Curse of King Tut: Facts & Fable. Among the world's most famous curses is the "Curse of the Pharaoh," also known as King Tut's Curse. Ever since King Tutankhamun's tomb was discovered in Egypt's Valley of the Kings, stories circulated that those who dared violate the boy king's final resting place faced a terrible curse.

Though not as dramatic as a murderous mummy, it is widely claimed that many people associated with opening the tomb fell soon victim to the curse, dying under mysterious circumstances. Unlocking the medical mysteries of King Tut’s tomb. The mask of King Tutankhamun at the Egyptian Museum in Cairo. Photo By Shadi Bushra/Reuters/File On this day in 1922, the tomb of Tutankhamun, or King Tut as he is better known, was discovered by British archaeologist Howard Carter. The news grabbed the world by the scruff of its collective neck. Most compelling was Tut’s “eternal resting place,” a tomb consisting of four chambers, each one guarded by a golden door. In 1939, The New York Times reported it filled with “couches, chairs, alabaster vases, chariots, a throne, stools and chests, all glistening with inlay and gold, and a sealed doorway leading still beyond.

America's Scariest Trails: Vanished - Backpacker. Bennington Triangle There are plenty of good reasons to hike Vermont's 272-mile Long Trail. It's the country's oldest long-distance path and still one of the hardest. And it takes you over Glastenbury Mountain, site of the backcountry's most bizarre–and still unexplained–case of missing hikers. Between 1945 and 1950, five people disappeared in the area. Amazingly, three of them were walking with other hikers when they momentarily slipped out of sight–only to vanish forever.

Bennington Breaking News, Sports, Weather, Traffic. Treasure Hunt to Discover Oak Island’s Mysterious Booty. Since 1795, explorers—including our 32nd president—have traveled to Oak Island in search of a mysterious buried and booby trapped treasure. So far, none have successfully reached it. About The Curse of Oak Island. Archaeological site, China. The Secret Tomb of China's 1st Emperor: Will We Ever See Inside? Buried deep under a hill in central China, surrounded by an underground moat of poisonous mercury, lies an entombed emperor who's been undisturbed for more than two millennia. Art Through Time: A Global View - Terracotta Army (detail) from the Tomb Complex of Qin Shi Huangdi. B.U. Bridge: Boston University community's weekly newspaper. Stonehenge in America? Archaeology professor debunks claims for ancient rock structures as pseudoscientific fallacy.