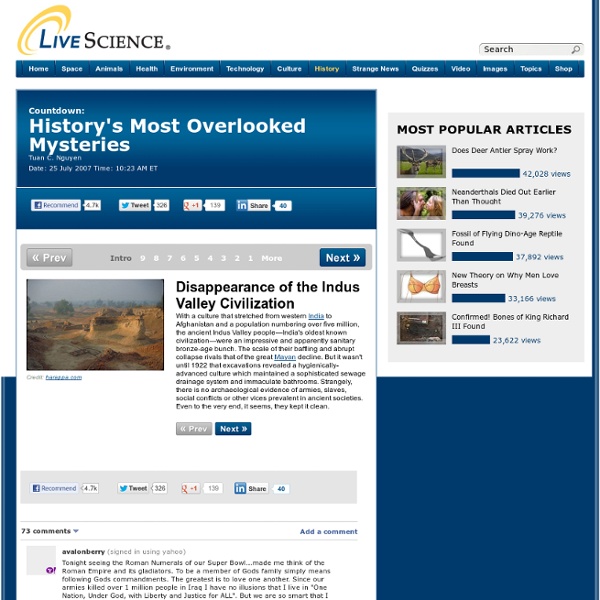 Tuan C. Nguyen | July 25, 2007 10:23am ET Credit: Photographed by Aurel Stein, circa 1910 Although many of life's great mysteries remain unsolved, there are some lesser known ones that also have stumped researchers for centuries. Related:  Archeology • Mysteries

strangemag.com - Investigating Strange Phenomena Iceman Mummy Leaves Few Relatives The Neolithic mummy dubbed the Iceman likely has no relatives alive today on his mom's side of the family, finds a new study of the ancient guy's genes. The remains of the Iceman (also called Ötzi, Frozen Fritz and Similaun Man) were discovered accidentally in 1991 by German tourists in the Eastern Alps. Since then, a suite of tests has opened a window into the guy's life and death. For instance, the Iceman was about 45 years old when he died; he was probably a hunter-gatherer while alive; he sustained a shoulder injury from an arrow and might have died from head trauma; and his last meal included unleavened bread and meat. Now, researchers have fast-forwarded genetically from 5,300 years ago when Ötzi died to the present to look at whether his maternal lineage is alive and kicking. Mom's genes The research team, led by Franco Rollo of the University of Camerino and Luca Ermini working at Camerino and the University of Leeds, extracted DNA from Iceman's rectum. Finding ancestors

Things That Generate Space-related Hoaxes | Mystery Missiles & Weather Balloons, UFO’s & Aliens | Life's Little Mysteries It doesn't take much to convince people that they've seen an experimental missile or a UFO. A funny-looking cloud or an exceptionally bright planet will usually do the trick. Here, our top 7 things that drive space-related hoaxes. Tanganyika laughter epidemic The Tanganyika laughter epidemic of 1962 was an outbreak of mass hysteria – or mass psychogenic illness (MPI) – rumored to have occurred in or near the village of Kashasha on the western coast of Lake Victoria in the modern nation of Tanzania (formerly Tanganyika) near the border of Kenya.[1] The laughter epidemic began on January 30, 1962, at a mission-run boarding school for girls in Kashasha. The laughter started with three girls and spread haphazardly throughout the school, affecting 95 of the 159 pupils, aged 12–18.[2][3] Symptoms lasted from a few hours to 16 days in those affected. The teaching staff were not affected but reported that students were unable to concentrate on their lessons. The school was forced to close down on March 18, 1962.[4] The school from which the epidemic sprang was sued; the children and parents transmitted it to the surrounding area. See also[edit] References[edit] Jump up ^ Jeffries, Stuart (November 21, 2007). External links[edit]

Treasure in Great Pyramid Awaits Discovery, Egypt's 'Indiana Jones' Says | Zahi Hawass & Archaeology TORONTO — Zahi Hawass is back. The famous, and at times controversial, Egyptologist is free of legal charges, free to travel and is launching a worldwide lecture tour with the aim of getting tourists back to Egypt, he told LiveScience in an interview. Hawass also said that he believes there are some fantastic discoveries waiting to be made, including more tombs in the Valley of the Kings and a secret burial chamber, containing treasure, which he believes to be inside the Great Pyramid built by the pharaoh Khufu (also known as Cheops). [Image Gallery: Egypt's Valley of the Kings] It's a turnaround for the archaeologist, who, just a few months ago, was under investigation and banned from traveling outside Egypt. Hawass was head of the Supreme Council of Antiquities for nearly 10 years and became Egypt's first-ever antiquities minister near the end of Mubarak's regime. The massive gallery where the lecture was held was filled to capacity, with a waiting list just as robust.

Scary Paranormal Stories Brain Dead: Strange Find Analyzed | Preservation & Skull A 2,500-year-old human skull uncovered in England was less of a surprise than what was in it: the brain. The discovery of the yellowish, crinkly, shrunken brain prompted questions about how such a fragile organ could have survived so long and how frequently this strange type of preservation occurs. Except for the brain, all of the skull's soft tissue was gone when the skull was pulled from a muddy Iron Age pit where the University of York was planning to expand its Heslington East campus. [Britain's Oldest Brain Found] "It was just amazing to think that a brain of someone who had died so many thousands of years ago could persist just in wet ground," said Sonia O'Connor, a postdoctoral research fellow at the University of Bradford. "It's particularly surprising, because if you talk to pathologists who deal with fresh dead bodies they say the first organ to really deteriorate and to basically go to liquid is the brain because of its high fat content," O'Connor said.

Is Spontaneous Human Combustion Real? | Irishman Dies of Spontaneous Human Combustion | Paranormal Mysteries Can people suddenly and inexplicably explode into a ball of fire? It sounds like something in a horror film, but some people believe it happens. It's also what an Irish coroner recently concluded about the death of Michael Faherty, a 76-year-old Irishman who burned to death in his home in December 2010. Usually, of course, fires do not start on their own. But the claim that people can suddenly burst into flames for no apparent reason is a whole different matter. But are there any confirmed real-life cases? This is where things get trickier. How could a body burn once it has ignited? Fires are notoriously fickle; sometimes flames will spread to other places, other times they won't. Michael Faherty's case may not be as mysterious as it looks. If SHC is a real phenomenon (and not the result of an elderly or infirm person being too close to a flame source), why doesn't it happen more often? This story was provided by Life's Little Mysteries, a sister site to LiveScience.

Voynich manuscript The Voynich manuscript is an illustrated codex hand-written in an unknown writing system. The vellum on which it is written has been carbon-dated to the early 15th century (1404–1438), and may have been composed in Northern Italy during the Italian Renaissance.[1][2] The manuscript is named after Wilfrid Voynich, a Polish book dealer who purchased it in 1912.[3] Some of the pages are missing, but about 240 remain. The text is written from left to right, and most of the pages have illustrations or diagrams. The Voynich manuscript has been studied by many professional and amateur cryptographers, including American and British codebreakers from both World War I and World War II.[4] No one has yet succeeded in deciphering the text, and it has become a famous case in the history of cryptography. The mystery of the meaning and origin of the manuscript has excited the popular imagination, making the manuscript the subject of novels and speculation. The Voynich manuscript was donated by Hans P.

Hidden Monuments Reveal 'Stonehenge Is Not Alone' The megaliths of Stonehenge, which were raised above England's Salisbury Plain some 5,000 years ago, may be among the most extensively studied archaeological features in the world. Still, the monument is keeping secrets. Scientists have just unveiled the results of a four-year survey of the landscape around Stonehenge. Using non-invasive techniques like ground-penetrating radar, the researchers detected signs of at least 17 previously unknown Neolithic shrines. "Stonehenge is undoubtedly a major ritual monument, which people may have traveled considerable distances to come to, but it isn't just standing there by itself," project leader Vincent Gaffney, an archaeologist at the University of Birmingham in the U.K., told Live Science. "It's part of a much more complex landscape with processional and ritual activities that go around it. Scholars still aren't sure why Stonehenge was built, as the monument's Neolithic creators left behind no written records.

FATEMAG.COM CSI: Egypt King Tut is in the news again--not regarding his supposed "curse," but as the subject of high-tech analyses that debunked his supposed "murder" and provided a more realistic representation of the youthful king's features. In his book, The Murder of Tutankhamen, Egyptologist Bob Brier had claimed to solve the 3,000-year-old mystery of the teenage pharaoh's death. Citing forensic evidence he concluded that Tut was the victim of murder, probably by his chief advisor Aye, a commoner, who then married Tut's widow, Queen Ankhesenamen. According to Brier, "The X-ray of Tutankhamen's skull suggests a blow to the back of the head." Given my background as a former private investigator and investigative writer who has been involved in several death investigations, as well as co-author of the forensic textbook Crime Science, I have followed the "murder" case with interest. However, the new investigation did not solve the mystery of Tutankhamen's death. The result of plague. Chest trauma.