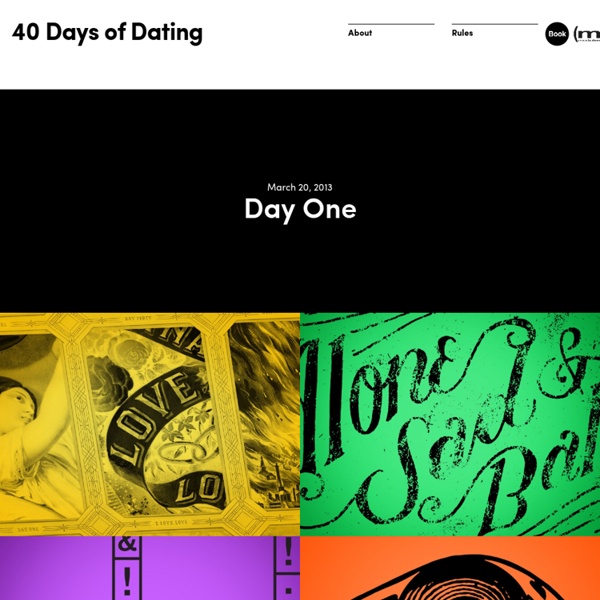 Jessica Walsh Did you see Timothy today?Yes, briefly. What did y’all do together?We went to our first couples therapy session together. I go to therapy on my own, and have always enjoyed it.

Related:  varie • More of Us and Our Relationships

150+ Art Careers – The Ultimate List Where can studying Art or Design take you? What kinds of careers exist for those who study creative subjects at high school? This article contains a list of over 150+ awesome careers, with 25 individuals showcased in detail. What it's like to rent a friend in Japan After lunch we roam a warren of 100-yen stores nearby—100 yen for a dusty old mug, for a weird cat statue, for a pouch of dried plums. Before parting ways at the subway entrance, we ask someone to snap our photo. That funny kinship that forms in front of a camera—the arms around each other, the shared self-consciousness—seems to happen for us, too. Yumi writes her address in my notebook, draws a cartoon of herself in her fedora.

Awake Dating is the hot new website for conspiracy theorists Perhaps you’ve tried to make a match based on surface connections like eye color, musical taste, or even mullets. But something was missing. Your matches didn’t share your curiosities, your drive for finding truth in the world. The Market Failure of First Dates After the pleasantries are exchanged and the drinks are ordered, after the conversation moves from jobs to tastes in music to viral YouTube videos, after the awkward fumbling for the check, the walk to the curb, the stilted hug-turned-air-kiss-turned-forehead bump, after the goodbyes—every first date leaves one nagging question: Will you ever hear from them again? The dating game is an imperfect market: you may dazzle your date with your wit and mega-watt smile only to never hear from them again.

The unexpected perks of Lyft and Uber’s random encounters This story is part of a series of features, The Future of Ride-Hailing. The project is intended to show how the taxicab industry, with varying degrees of success, is pushing back against the existential threat posed by the rise of ride-hailing services like Lyft and Uber. The first time I met Wesley, I tried to explain the cloud. The Ultimate Crowdsourced Map of Long Distance Relationships Around Valentine's Day this year, we got the idea of asking Atlas Obscura readers about one of the most fraught kind of relationships—the long distance kind, or LDRs. We assumed we'd get 50 or so responses, and maybe we'd pick a few stories to highlight. But nearly 600 of you filled out the survey. The results were incredible—and fill the interactive map above. People conducted relationships from the ends of the earth, spanning years and ostensibly filling whole hard drives with video chats and text messages.

Dad Of 4 Girls Tweets Conversations With His Daughters, Proves Parenting Is Fun Indianapolis based blogger James Breakwell is considered by some to be the funniest dad on Twitter. His secret? He just tweets his daily conversations with his 4 daughters, all under the age of six, on his twitter XplodingUnicorn. Paolo Frattini has to show a piece of art seven or eight times on television before someone buys it. Paolo Frattini does not like television sets, people who confuse the various kings of France, or modern art. “I can’t sell it,” says Frattini of the last. “I can’t use my feelings, so maybe I can’t push it enough. My feelings are for antique art.” Always dressed in white, Frattini has heaped praise on furniture, jewelry and art for the past 15 years on Telemarket, Italy’s biggest shopping channel on public television, open for business 24-hours a day, 365 days a year. He specializes in antique consignments with prices starting in the thousands of euros, so regular television shoppers tend to wait him out before calling in.

When This Girl Asked Out A Barista, A Customer Secretly Live Tweeted Their Conversation Sometimes something happens in life that’s so unbelievable that it may as well be fiction. Take this love story for example. Twitter user @notjerryclayton was sitting in a cafe in Brooklyn, NY, just minding his own business recently, when the two baristas behind the counter decided to choose that very moment to declare their secret love for each other.

My face is catfish bait: I’m the “40-year-old man” face of deceptive online dating — and I think I know why they do it We’re re-running this story as part of a countdown of the year’s best personal essays. To read all the entries in the series, click here. “I honestly can’t believe I am even emailing you, but your face has meant a lot to me.

“Mirrors With Memories”: Why Did Victorians Take Pictures of Dead People? “Secure the shadow, ere the substance fades.” That very early photographers’ slogan—introduced not long after Louis Daguerre announced his daguerreotype process in 1839—may seem ominous, but it reflects the reality of Victorian life. In an age before antibiotics, when infant mortality soared and the Civil War raged, death was a constant presence in the United States. lifehack Lots of people are in relationships that don’t make them truly happy. They love their partner and they don’t want to be with anyone else, but for some reason their relationship is filled with arguments and resentment. Sometimes they feel disrespected by their partner even though they know that their partner loves them. This can leave both partners feeling frustrated, confused and upset. If you can relate to this you’re not alone. Lots of couples love each other, but they don’t know the relationship rules for a happy love life.