Operating system and the Neanderthal theory 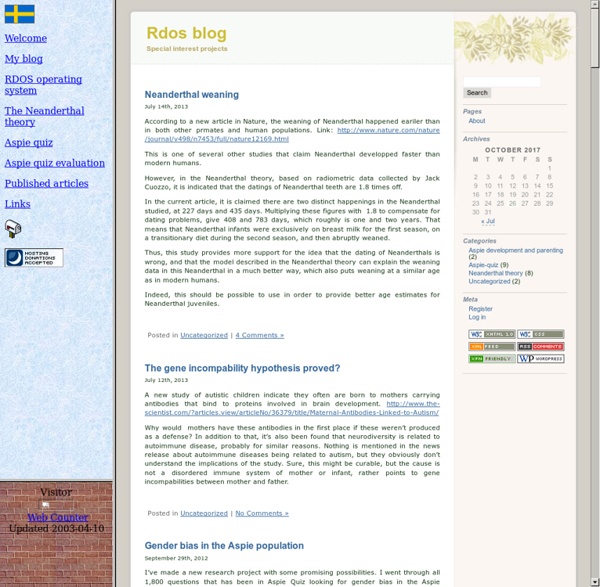 FreeDOS | The FreeDOS Project Ancient DNA Reveals That Some Neanderthals Were Redheads Ancient DNA retrieved from the bones of two Neanderthals suggests that at least some of them had red hair and pale skin, scientists report in the journal Science. The international team says that Neanderthals' pigmentation may even have been as varied as that of modern humans, and that at least 1 percent of Neanderthals were likely redheads. The scientists -- led by Holger Römpler of Harvard University and the University of Leipzig, Carles Lalueza-Fox of the University of Barcelona, and Michael Hofreiter of the Max Planck Institute for Evolutionary Anthropology in Leipzig -- extracted, amplified, and sequenced a pigmentation gene called MC1R from the bones of a 43,000-year-old Neanderthal from El Sidrón, Spain, and a 50,000-year-old individual from Monti Lessini, Italy. "Together with other genes, this MC1R gene dictates hair and skin color in humans and other mammals," says Römpler, a postdoctoral researcher working with Hopi E.

Home | Haiku Project Homo sapiens - H. sapiens (Anatomically Modern Humans - AMH) are the species we belong to. Introduction The discussion of our species, Homo sapiens, is probably the most difficult to put together. Whereas in the previous species have been introduced with historical background and a discussion of the early, most important finds, and the individuals responsible for the species designation, this introduction will focus on some of the theory implicit in the discussion of the origin and spread of H. sapiens. Most researchers currently accept the statement that “modern” humans can be considered to date to approximately 200–250 kyr. The perspective of multiregionalists is that extending to the origin of H. erectus, there have been populations of humans living around the old world, and these all contributed to successive generations, eventually leading to modern humans. There are various models which embody combinations of these ideas, different “strict” interpretations of the two theories, etc. Beyond disagreement over fundamental issues like “What is a valid speciation event?”

MikeOS - simple x86 assembly language operating system The Physical Anthropology of Israelite Peoples In the article below we examine archaeological and historical sources alongside Rabbinical texts and the findings of Physical Anthropology. The Israelites of old were regarded by the Egyptians as people from the land of Amuru, meaning the land of the Amorites which the Israelites conquered. Another term applied to the general Syrian area was "Retenu". On the Egyptian pictures skins of individuals from the Israelite or "Syrian" area are often light colored and pinkish3. In addition darker individuals from these same areas are also depicted and sometimes they are the majority. The suggestion that physical environment influences inherited appearance and that the Israelite Tribes were of differing types, should not surprise anybody -both ideas are indicated in the Bible and in Oral Tradition. Regarding external influences, it is related in the Book of Genesis how Jacob was set to mind flocks of sheep and goats belonging to his father-in-law, Laban (Genesis 30; 31-43). 1. 2. 3. 4. 5. 6. 7. 8.

AROS Research Operating System Varangians Etymology[edit] Greek Βάραγγος, Várangos, and Old East Slavic varęgŭ are derived from Old Norse væringi, originally a compound of vár “pledge, faith” and gengi “companion”, thus meaning “sworn companion, confederate” or “a foreigner who has taken service with a new lord by a treaty of fealty to him, or protégé”.[1][12] Some scholars seem to assume a derivation from vár with the common suffix -ing-.[13] Yet, this suffix is inflected differently in Old Norse, and furthermore, the word is attested with -gangia- in other Germanic languages in the Early Middle Ages, like in Old English wærgenga, Old Frankish wargengus and Langobardic waregang.[14] The reduction of the second part of the word could be parallel to that seen in Old Norse foringi “leader”, correspondent to Old English foregenga and Gothic fauragangja “steward”.[15][16] Kievan Rus'[edit] In the 9th century, the Rus' operated the Volga trade route, which connected Northern Russia (Gardariki) with the Middle East (Serkland).

Visual Operating System | Home Rus' people The Rus' (Slavic: Русь; Greek: Ῥῶς) — ancient people who gave their name to the lands of Russia and Belarus. Their origin and identity are much in dispute. Russian scholars, along with some Westerners, consider the Rus to be a southeastern Slavic tribe that founded a tribal league - the Kievan state. Ibn Khordadbeh, a Persian geographer of the 9th century also believed the Rus people are Slavic. Etymology[edit] Europe in the 9th century. According to the most prevalent theory, the name Rus', like the Finnish name for Sweden (Ruotsi), is derived from an Old Norse term for "the men who row" (rods-) as rowing was the main method of navigating the rivers of Eastern Europe, and that it could be linked to the Swedish coastal area of Roslagen (Rus-law) or Roden, as it was known in earlier times.[1][8][9] The name Rus' would then have the same origin as the Finnish and Estonian names for Sweden: Ruotsi and Rootsi.[1] Key sources[edit] Slavic sources[edit] Islamic sources [edit] History[edit]

Pinguy OS Red hair Red hair occurs naturally in 1–2% of the human population.[1] It occurs more frequently (2–6%) in people of northern or western European ancestry, and less frequently in other populations. Red hair appears in people with two copies of a recessive gene on chromosome 16 which causes a mutation in the MC1R protein.[citation needed] Cultural reactions have varied from ridicule to admiration; many common stereotypes exist regarding redheads and they are often portrayed as fiery-tempered. Geographic distribution Historical Woman with red hair, Papua New Guinea. Several accounts by Greek writers mention redheaded people. In Asia, red hair has been found among the ancient Tocharians, who occupied the Tarim Basin in what is now the northwesternmost province of China. Red hair is also found amongst Polynesians, and is especially common in some tribes and family groups. Modern Mexican boxer Saúl Álvarez nicknamed "El Canelo" (in English, "Cinnamon") after his reddish hair Biochemistry and genetics

Ginger The naturally preserved body of an adult man was found in a cemetery at Gebelein, Egypt, and dated to the Late Predynastic period, around 3400 BC, or earlier. Ginger died more than five thousand years ago, yet his golden hair, which gave him his nick-name, and even his toe- and finger-nails were perfectly preserved. Before mummification was developed to preserve human remains bodies were placed in shallow graves, in direct contact with the sand. The picture below is from the British Museum, where Ginger was brought more than a hundred years ago. Although his body is heavily stained from more than 5,000 years lying in the sand we can see he had a yellowish-white skin. He lies in the tightly curled, infantile position common to the burials of those days. Although this photograph does not serve well to illustrate the reason for naming this man "Ginger" he received that nickname when he was first put on display in the British Museum because of his golden curly locks. she had this to say: