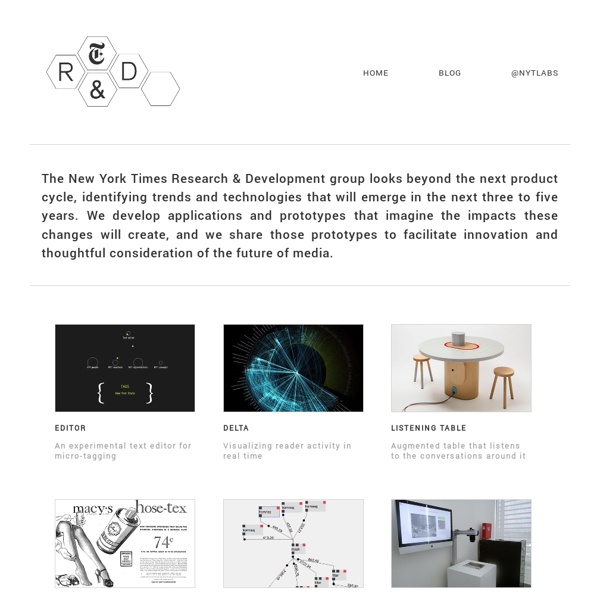 The New York Times Research & Development group looks beyond the next product cycle, identifying trends and technologies that will emerge in the next three to five years. We develop applications and prototypes that imagine the impacts these changes will create, and we share those prototypes to facilitate innovation and thoughtful consideration of the future of media. Revitalizing The New York Times photo archive Semantic network visualization of New York Times topics Environmental computing interactions in the kitchen Clip, annotate, collect and share New York Times content

Graphics What is El Niño and how does it affect global crop yields? The 2015-16 El Niño episode has been either the most or one of the most intense on record, depending on which measure you use. Going on sea surface temperatures alone, the latest El Niño narrowly edges out 1997-98, the previous strongest. Temperatures in the Niño 3.4 region of the Pacific Ocean — the most commonly used of the regions scientists measure for signs of an developing El Niño or La Niña conditions — peaked at 2.37°C above the long term trend in November 2015, just ahead of the 2.33°C mark reached in 1997.

Directed graph A directed graph. (sometimes ) of:[1] A digraph is called "simple" if it has no loops, and no multiple arcs (arcs with same starting and ending nodes). A directed multigraph, in which the arcs constitute a multiset, rather than a set, of ordered pairs of vertices may have loops (that is, "self-loops" with same starting and ending node) and multiple arcs. Discovering Gale Crater: How we did it Remember when virtual reality first became a "thing?" We loved Snow Crash and Lawnmower Man. We were pumped. Then we waited — for 20 years. Now, we finally get to play in that sandbox. We built the tour of Gale Crater to discover how journalism could succeed in virtual reality.

What Visualization Tool/Software Should You Use? – Getting Started Are you looking to get into data visualization, but don't quite know where to begin? With all of the available tools to help you visualize data, it can be confusing where to start. The good news is, well, that there are a lot of (free) available tools out there to help you get started. It's just a matter of deciding which one suits you best. This is a guide to help you figure that out. But before we get into what you should use, a couple of questions.

How politicians poisoned statistics In January 2015, a few months before the British general election, a proud newspaper resigned itself to the view that little good could come from the use of statistics by politicians. An editorial in the Guardian argued that in a campaign that would be “the most fact-blitzed in history”, numerical claims would settle no arguments and persuade no voters. Not only were numbers useless for winning power, it added, they were useless for wielding it, too. Numbers could tell us little. dragDrop02 : Built with Processing Still getting to grips with OOP...This is just a little experiment with inheritance. The 'Base' classes 'BaseDragger' and 'BaseTarget' are not intended to be instantiated directly. I discovered that the way to enforce this was to declare them as abstract, (it's not possible to instantiate an object of an abstract class). However I also wanted to enforce the implementation of certain methods in child classes and initially thought the way to achieve this was to also define an Interface; which would mean both extending the Base class and implementing the Interface. However it turns out another advantage of abstract classes is that you can declare abstract methods which must be implemented in the child classes.

These charts clearly show how some Olympic swimmers may have gotten an unfair advantage Denmark's Pernille Blume won the gold medal in the 50-meter freestyle swimming in Lane 4 at the 2016 Summer Olympics. The rest of the women in the final race finished in descending order according to their lane number. (Dominic Ebenbichler/Reuters) A few years ago, researchers from Indiana University discovered a disturbing pattern at the 2013 Swimming World Championships in Barcelona. According to the lap-time data, athletes assigned to the outer lanes of the pool were consistently swimming faster in one direction than the other. A mysterious force seemed to be interfering with the competition.

OECD – Your Better Life Index Average personal index for Germany, men, 15–24 How’s life? There is more to life than the cold numbers of GDP and economic statistics – This Index allows you to compare well-being across countries, based on 11 topics the OECD has identified as essential, in the areas of material living conditions and quality of life. Download executive summary Download the index data Learn more about the index Better Life BlogArchive Happiness pays

The Journalist-Engineer – Medium A couple months ago, I published an article comparing historic and present-day popularity of older music. I used two huge datasets: 50,000 Billboard songs and 1,4M tracks on Spotify. If I were writing an academic paper, I’d do a ton of analysis, regression, and modeling to figure out why certain songs have become more popular over time. Or I could just make some sick visualizations… Instead of reporting on my “theory”, I wagered that readers would get more out of an elegant presentation of the data, not an analysis of it. It’s a completely different approach to storytelling. Ruby-Processing What is Ruby? What is Processing? Processing is a Java-based programming framework created by Ben Fry and Casey Reas while they were studying under John Maeda at the MIT Media Lab back in 2001. (Java itself is of a similar vintage to Ruby—1995—but it may “feel older” because of its lineage and its greater circulation.) Processing is used by students, artists, designers, researchers, and hobbyists for learning, prototyping, and production. Processing boasts a healthy development community with a wealth of helpful libraries and code examples, all available for free.

How We Rebuilt the Wall Street Journal’s Graphics Team Combining forces, embedding specialists, and busting out of the news cycle The Wall Street Journal recently took steps to merge our print graphics department with our interactive team. Our new team is simply named Graphics. This brought a number of major changes to our department like: