The 12 Ties that Bind Long-Term Relationships 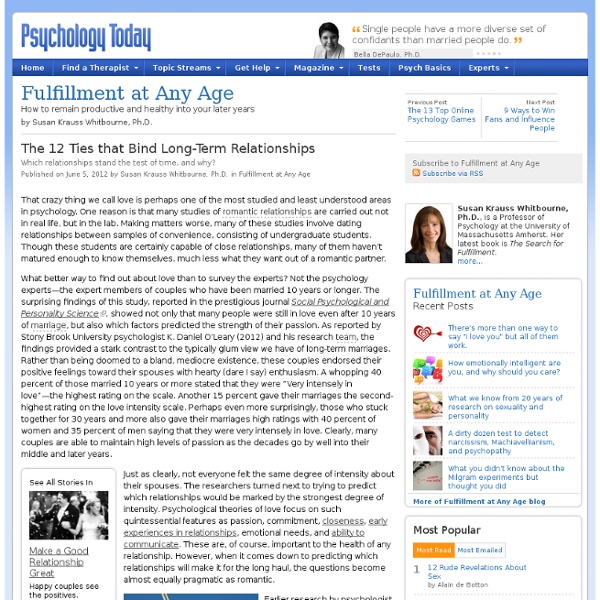 That crazy thing we call love is perhaps one of the most studied and least understood areas in psychology. One reason is that many studies of romantic relationships are carried out not in real life, but in the lab. Making matters worse, many of these studies involve dating relationships between samples of convenience, consisting of undergraduate students. Though these students are certainly capable of close relationships, many of them haven’t matured enough to know themselves, much less what they want out of a romantic partner. What better way to find out about love than to survey the experts? Not the psychology experts—the expert members of couples who have been married 10 years or longer. Just as clearly, not everyone felt the same degree of intensity about their spouses. A few caveats about the study might have already come to your mind. Now that you’ve learned the basics of this fascinating study, it’s time to put your relationship to the test.

Saudade Saudade (European Portuguese: [sɐwˈðaðɨ], Brazilian Portuguese: [sawˈdadi] or [sawˈdadʒi], Galician: [sawˈðaðe]; plural saudades)[1] is a Portuguese and Galician word that has no direct translation in English. It describes a deep emotional state of nostalgic or profound melancholic longing for an absent something or someone that one loves. Moreover, it often carries a repressed knowledge that the object of longing may never return.[2] A stronger form of saudade may be felt towards people and things whose whereabouts are unknown, such as a lost lover, or a family member who has gone missing. Saudade was once described as "the love that remains" after someone is gone. Saudade is the recollection of feelings, experiences, places or events that once brought excitement, pleasure, well-being, which now triggers the senses and makes one live again. In Brazil, the day of Saudade is officially celebrated on 30 January.[3][4]

The Beauty Of Cinemagraph GIFs Developed in 2011 by Jamie Beck and Kevin Burg, cinemagraphs are GIF images that combine still photography and video to produce a stunning effect. Typically, the entire GIF is motionless except for one or two elements, providing a brilliant juxtaposition between the motion and the motionless. For your viewing pleasure, we’ve collected 43 beautiful cinemagraph GIFs: How I Learned to Stop Criticizing and Be Nice to My Husband - Nina Roesner A Christian woman on making peace with the Bible's command that "the wife shall respect her husband" Rembrandt van Rijn / The Royal Collection 10:20 pm. I emerged from the garage entrance to the house, setting down my computer bag and purse, and walked into the kitchen.

TEN UNTRANSLATABLE WORDS - spicyshimmy - Mass Effect FORELSKET The euphoria you experience when you’re first falling in love. Like getting tag-teamed by a one-two shot—cryo round first, incendiary second—that was walking into the same room as Commander Shepard. The experience blew cold and then hot, but after Rahna… Kaidan was used to it, as much as anybody could be. It always moved on to something else, because it wasn’t enough just to change your body temperature, it needed to pierce the skin, too. Stumblers Who Like 50 of the World's Best Breakfasts – Written by Victoria Philpott Not quite had your fill of breakfasts just yet? Check out our beautifully visual list of the 30 best breakfasts from around the world. Plan your next culinary adventure or just get a little adventurous with breakfast at the weekend. Salivating.

Victoria's Secret model Cameron Russell gives TED talk on why girls SHOULDN'T want to be supermodels AFP PHOTO / TIMOTHY A. CLARY Cameron Russell walking the 2012 Victoria's Secret Fashion Show at the Lexington Avenue Armory on November 7, 2012 in New York Cameron Russell, the catwalk superstar and lingerie model for Victoria's Secret has taken to the stage at a TED event in Washington DC. The 25-year-old model advised young girls against following her path. Appearing at the event alongside top scientists, economists and political advisors, including former Secretary of State Colin Powell and inspirational soprano singer Charity Sunshine Tillemann-Dick, who received a double lung transplant in 2009, Russell took to the stage in October to explore her experience of body image and the modeling industry in a ten-minute talk, a video of which was posted online December 6 and has been generating buzz this week. The TEDxMidAtlantic 2012 session was titled 'Be Fearless'.

10 Reasons Why My Dog Is My Valentine The following article was written by Keegan Baur. Valentine’s Day is the day when we cherish our loved ones and shower them with affection. We each choose a valentine and make every effort to show that special someone just how much we truly appreciate him or her. But who says “that someone” has to be human? For everyone who’s “in love” with a furry, four-legged canine, let’s take a moment to reflect on why we’re so crazy about our dogs. Still Life: Bent Objects UPDATE: The Return of Bent Objects Wires transform these objects from inanimate to hilarious works of art. Little polish girl McDonalds as Sculpture Materials Rhetological Fallacies Buy a printable multi-language PDF Thanks to 李为维, Hayanna Carvalho, Iván Galarza, Klaus-Michael Lux, Kadar Magor, Gilles Peyroux and Adriano Venditti, Rhetological Fallacies is now available in Chinese, French, German, Hungarian, Italian, Portuguese, Romanian and Spanish. We’re thinking of creating an interactive version of this graphic.

Total Green Goodness Smoothie The following article was written by Kristina Carrillo-Bucaram. Feeling a little tired? Maybe you need a green infusion! Lisa Jey Davis: Singles: Most People Wish They Were You Adult single people are an elite breed of human. Anyone who has become a part of a couple holds a deep-seated respect and reverence for their single friends (those single friends who are truly living, that is. Not the sad, sappy, bleeding heart single friends). In fact, the reverence and awe toward singles from their coupled-up counterparts is so great, it could be compared to that reserved for the Pope... or for George Clooney, perhaps. Why is that? Why do so many people in committed relationships find themselves envious of their single friends so often?