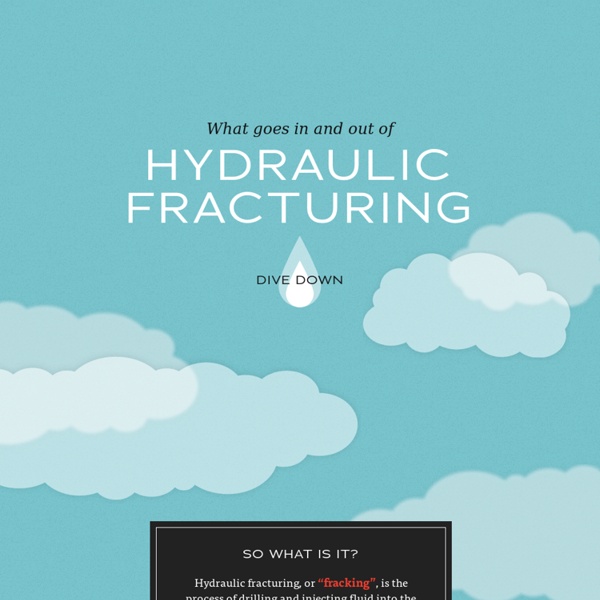 OTL: The Long, Strange Trip of Dock Ellis - MLB In the mid-1990s, Pierce was invited to work at an old-timers' baseball fantasy camp in Reno, Nev. Ellis was there. So was Blue, who did end up starting against Ellis in the 1971 All-Star Game. 5 Amazing Towns on Perilous Cliff Sides Spot Cool Stuff loves a good cliff-side town. There’s something about them that’s romantic, daring and a little impossible. Here are five of our favorites places where no one with vertigo would want to live: Castellfollit de la Roca, Spain Fracking: A Silent Death Sweeps Across the World By Carolanne Wright Contributing Writer for Wake Up World Farmland is tainted. Drinking water is flammable.

Farmers’ Market Recipe Generator 1 1/8 cups flour, more for rolling the dough Salt and pepper 1 teaspoon fresh rosemary leaves Interactive Map of Europe, Europe Map with Countries and Seas Europe is the second smallest of the inhabited continents. It is a part of the Eurasian land mass that includes Europe, Asia, Asia Minor and the Arabian Peninsula. As many large islands east and south of Asia are usually included in Asia, the Eurasian land mass extends from Iceland to New Guinea, from the Atlantic to the Pacific and from the Arctic to the Indian Oceans. Study finds fracking can cause earthquakes By Agence France-PresseFriday, June 15, 2012 16:45 EDT Certain oil and gas operations that involve injecting wastewater underground can cause earthquakes, but the risk from hydraulic fracturing is generally low, said a US scientific report Friday. The report by the National Research Council found that the most significant risk of earthquakes is linked to secondary injection of wastewater below ground to help capture remaining hydrocarbons from a petroleum reservoir.

Syrian Journey: Choose your own escape route - BBC News The Syrian conflict has torn the country apart, leaving thousands dead and driving millions to flee their homes. Many seek refuge in neighbouring countries but others pay traffickers to take them to Europe - risking death, capture and deportation. If you were fleeing Syria for Europe, what choices would you make for you and your family? Take our journey to understand the real dilemmas the refugees face. The routes, options and outcomes in this Syrian Journey feature were based on real stories uncovered by extensive research as part of a BBC Arabic digital project exploring migration from Syria.

Fracking Is Not a 'Fait Accompli' for 2012, N.Y. Official Says New York regulators have received more than 60,000 public comments on the state’s plan to allow hydrofracking, Gov. Andrew M. Cuomo’s top environmental official said on Tuesday at a hearing. Associated PressJoe Martens Joe Martens, commissioner of the state Department of Environmental Conservation, spoke at a joint legislative hearing on the Cuomo administration’s proposed 2012-13 budget for his agency. (As I report in Tuesday’s paper, the governor’s budget allocates no money for ushering in the drilling over the next year.)

30 Compelling Examples of Visual Storytelling on the Web Storytelling is a powerful approach that can, when done right, compel users to convert more effectively than what any amount of optimization, crazy visual callouts, or awesome interactive elements can do otherwise. Much like how we expect to see a moral at the end of a book, we expect to find a purpose at the end of a site with a storytelling experience. When the path to the “moral of the story” (or conversion point, to be more specific) is laid out clearly in front of our users’ eyes, the rest of the work lies simply in convincing them that the purpose is really worth grabbing on to… which is great since with storytelling, a user is normally in the mindset of learning more about what the story has to offer. So take a look at the examples below and experience how their visual storytelling compels you to continue scrolling down their pages! 1. MoMA Century of the Child (

BREAKING: Ohio Governor Halts Four More Fracking Wastewater Injection Wells After Yesterday’s Quake EcoWatch The Kasich administration has put a temporary halt to the disposal of toxic wastewater from hydraulic fracturing (better known as fracking—a procedure used to extract oil and gas out of rock formations such as the Marcellus and Utica shale) from oil and natural-gas drilling wells within a 5-mile radius of the D&L Energy site in Youngstown, Ohio—a well believed to be the cause of 11 earthquakes since March, including a 4.0 quake on New Years Eve that hit the region at 3:05 p.m. Rick Simmers, chief of oil and gas management for the Ohio Department of Natural Resources (ODNR), said a daily average of 5,000, 42-gallon barrels of brine water or fracking wastewater were pumped into the well 9,200 feet below the ground. He said a majority of the wastewater—a byproduct of fracking—comes from Pennsylvania wells. There are 177 injection wells throughout Ohio.

Planet Money Makes A T-Shirt Why A T-Shirt? We wanted to see the hidden world behind clothes sold in this country, so we decided to make a T-shirt. We wanted to make an ordinary shirt like the vast majority of the shirts sold in this country — not organic cotton, not hand-sewn in the United States. To figure out how many shirts to make, and to raise money to pay for them, we turned to Kickstarter. Our goal was to sell 2,000 shirts. In the end, we sold 25,000.