Slavery Footprint - Made In A Free World 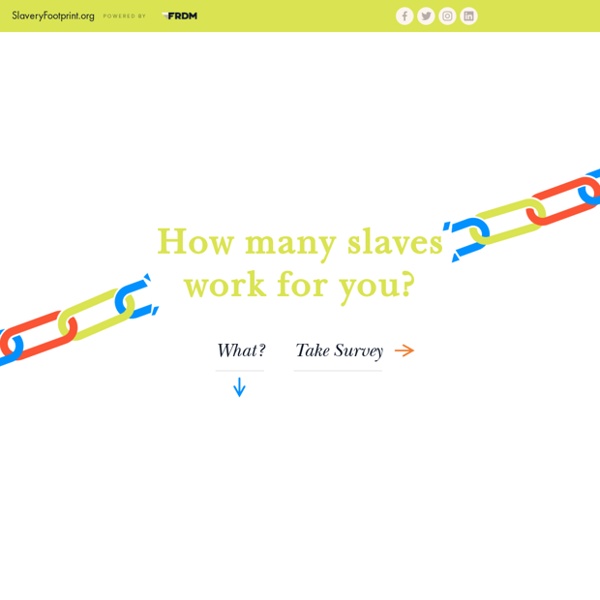 Made in a Free World - A solution for business. Powered by Translate Slavery Footprint Slavery exists... Deep within the supply chains of the products we love.Consider this...

The history of British slave ownership has been buried: now its scale can be revealed The past has a disconcerting habit of bursting, uninvited and unwelcome, into the present. This year history gate-crashed modern America in the form of a 150-year-old document: a few sheets of paper that compelled Hollywood actor Ben Affleck to issue a public apology and forced the highly regarded US public service broadcaster PBS to launch an internal investigation. The document, which emerged during the production of Finding Your Roots, a celebrity genealogy show, is neither unique nor unusual. It is one of thousands that record the primal wound of the American republic – slavery.

To millennials caught in the rent trap, the Panama Papers matter It is the largest leak in journalistic history, has led to a prime minister’s resignation in Iceland and calls for the reform of tax havens and has exposed the potentially shady dealings of many other world leaders. And yet, I found it hard to be shocked by some of the revelations of the Panama Papers. The revelation that Putin might have a fortune hidden away in offshore accounts in the names of his friends doesn’t surprise me if I’m honest. I imagine I’m not alone in feeling like this – it’s yet another story detailing the many unjust advantages enjoyed by the rich. In particular, I think I am not alone among members of Generation Y. As a recent Guardian investigation revealed, millennials (those aged 20-35) are particularly frustrated with the political and economic status quo, with one study finding that the key reason offered by young people about why they are disenchanted with democracy being that it “only serves the interest of the few”.

NSA files decoded: Edward Snowden's surveillance revelations explained Two factors opened the way for the rapid expansion of surveillance over the past decade: the fear of terrorism created by the 9/11 attacks and the digital revolution that led to an explosion in cell phone and internet use. But along with these technologies came an extension in the NSA’s reach few in the early 1990s could have imagined. Details that in the past might have remained private were suddenly there for the taking. Chris Soghoian Principal technologist, ACLU NSA is helped by the fact that much of the world’s communications traffic passes through the US or its close ally the UK – what the agencies refer to as “home-field advantage”.

'Occupy Wall Street' Issues First Official Declaration Since the occupation of Wall Street first began on September 17th, the mainstream media has criticized the general assembly for its lack of a cohesive list of complaints or demands. Not to be rushed by expectations of corporations and the elite they serve, the Occupy Wall Street action took its time fulfilling this demand. On Thursday night, Occupy Wall Street participants voted on and approved the first official “Declaration of the Occupation of New York City.”

Sex trafficking: The new American slavery Sacharay, which is how she wants to be known, was 14 years old and looking for a friend. "I used to get picked on a lot about being dark-skinned. I started wearing glasses and was called 'four-eyes.' And then they knew because I was so sensitive, they knew it was getting to me," she said. But when an older classmate approached her and offered to be her friend, Sacharay thought maybe her fortunes had finally started to turn. Legacies of British Slave-ownership The Centre for the Study of the Legacies of British Slave-ownership has been established at UCL with the generous support of the Hutchins Center at Harvard. The Centre will build on two earlier projects based at UCL tracing the impact of slave-ownership on the formation of modern Britain: the ESRC-funded Legacies of British Slave-ownership project (2009-2012), and the ESRC and AHRC-funded Structure and significance of British Caribbean slave-ownership 1763-1833 (2013-2015). Colonial slavery shaped modern Britain and we all still live with its legacies. The slave-owners were one very important means by which the fruits of slavery were transmitted to metropolitan Britain. We believe that research and analysis of this group are key to understanding the extent and the limits of slavery's role in shaping British history and leaving lasting legacies that reach into the present. Full Project Overview

What Is Privilege? What is privilege? 10 people take a step forward or back based on 35 questions. Watch the experiment unfold at 0:58… Questions: 1. If your parents worked nights and weekends to support your family, take one step back. 2. If you are able to move through the world without fear of sexual assault, take one step forward. 3. Home Appliance Energy Use In the United States, over 20% of our total energy consumption is residential. In fact, in the United States, we are the 7th largest per capita consumer of residential energy. Where is all of that energy going? Are you living with a "gas-guzzler"? Explore the application below to understand more about how we consume energy in our homes. Blue stars indicate ENERGY STAR models are available.

William Black: Why aren’t the honest bankers demanding prosecutions of their dishonest rivals? By William Black, a former Federal banking regulator and Associate Professor of Law and Economics at the University of Missouri-Kansas City. Cross posted from New Economic Perspectives. This is the second column in a series responding to Stephen Moore’s central assaults on regulation and the prosecution of the elite white-collar criminals who cause our recurrent, intensifying financial crises.