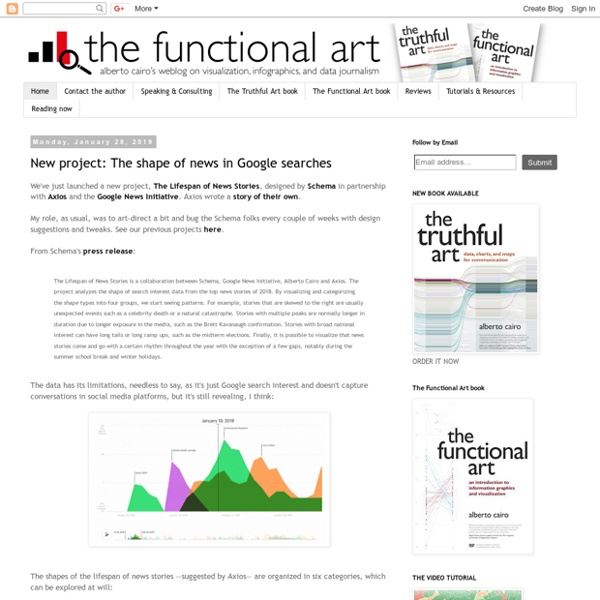 Seriously. I'm planning to use that motto as a title for future presentations. Ezra Klein's new online venture, Vox, has just published a series of graphs titled These 15 charts show our health care prices are totally insane. As someone who was born in Spain and enjoyed public health care for 30 years, I can assure you, dear U.S. citizens, that this is accurate. Vox got it right. However, Vox's challenge is that they don't need to persuade me.

Visual Business Intelligence We typically think of quantitative scales as linear, with equal quantities from one labeled value to the next. For example, a quantitative scale ranging from 0 to 1000 might be subdivided into equal intervals of 100 each. Linear scales seem natural to us. If we took a car trip of 1000 miles, we might imagine that distance as subdivided into ten 100 mile segments. It isn’t likely that we would imagine it subdivided into four logarithmic segments consisting of 1, 9, 90, and 900 mile intervals. Why Are Data-Viz Designers So Obsessed With Circles? In 1726, Filippo Juvarra put the finishing touches on the dome of the Basilica of Superga, an intricately designed church in Turin, Italy. The artist painted the interior roof of the building with a kaleidoscopic pattern that when paired with the dome’s ring of windows creates the effect of ornate, concentric circles. Nearly 300 years later, in the French town of Cessy, engineers finished building the Compact Muon Solenoid, a massive particle detector that, when viewed in cross-section, bears a striking resemblance to Juvarra’s circular basilica dome. “These things look so similar, and yet they’re separated by 300 years,” says Manuel Lima. “One is all about religion and spirituality and the other is about science.” Lima, a design lead at Google and creator of the website Visual Complexity, was intrigued by the circle’s ubiquity.

Global Health Observatory (GHO) data Global Strategy for Women's, Children's and Adolescents' Health (2016-2030): Data portal The Every Woman Every Child Global Strategy indicator and monitoring framework includes 60 indicators from health and other sectors. 34 indicators are from the Sustainable Development Goals (SDGs) and 26 from related global monitoring initiatives. From these, 16 key indicators are highlighted to provide a snapshot of progress. The Global Strategy portal provides open access to the latest available data and estimates for the 60 indicators across 194 countries. This involves collaboration across WHO departments, H6 agencies (UNAIDS, UNFPA, UNICEF, UN Women, WHO and the World Bank), other UN organizations - including the UN Statistics Division and UNESCO, and global monitoring partnerships, including the Countdown to 2030 and academic institutions. – Access the portal

This map will change how you see the world Calling all geography nerds: The US Geological Survey has published a global ecosystems map which it says is the most detailed in the world. The map is an interactive mosaic of 3.5 billion cells, detailing more than 40,000 unique ecological areas based on four different factors that determine the make-up of an ecosystem – bioclimate, landforms, rock type and land cover. Cartography nuts can use the browser to click on any spot of the map to be given a description of the ecosystem in that exact location as well as scroll through a selection of places the USGS has picked out for special mention (see examples below). The Association of American Geographers, which developed the new map with the USGS, explains it was created to allow scientists, land managers, conservationists, developers, and the public "to improve regional, national, and global resource management, planning, and decision making". And we’re glad they did. More: The stereotype map of Britain according to north Londoners

Data Visualization vs. Data Analytics The term Business Intelligence solution can be a deceiving one. Many software solutions that call themselves BI can actually only offer you half of what you need. Here it’s important to make the distinction between two types of business analysis and intelligence tools: end-to-end solutions and ones that are merely front-end. An end-to-end solution is made up of a platform back-end, basically the tools and algorithms that handles preparing all the data, and a front-end that creates data visualizations and dashboard reporting. While we like to see our data in easy to handle visualizations, platforms that only give you this are not enough to get real insights from your company’s data.

Junk Charts This post is part 2 of an appreciation of the chart project by Google Newslab, advised by Alberto Cairo, on the gender and racial diversity of the newsroom. Part 1 can be read here. In the previous discussion, I left out the following scatter bubble plot. This plot is available in two versions, one for gender and one for race. The key question being asked is whether the leadership in the newsroom is more or less diverse than the rest of the staff. The art of Pi (`pi`), Phi (`phi`) and `e` // Martin Krzywinski / Genome Sciences Center ▲ 2013 day ▲ 2014 day ▲ 2015 day ▲ 2014 approx day ▲ Circular art

This site publishes high-touch, time-intensive data visualizations (and has a business that sustains it) Over 7,000 artists played in the New York City area in 2013. Only 21 of those later made it, really made it, headlining at a venue with an over 3,000-person capacity — among them, bigger names like Chance the Rapper, X Ambassadors, Sam Smith, and Sylvan Esso. I learned this sort of random but fascinating tidbit from a data visualization titled “The Unlikely Odds of Making it Big,” from the site The Pudding. The Pudding is the home to high-touch, painstakingly crafted data visualizations — what the site calls “visual essays” — that are distinct in their obsessive complexity over points of cultural curiosity. Most pieces stand wholly apart from the U.S. news cycle; no anxiety-inducing interactives around budget, taxes, health care.

See the world differently with these minimalist maps This is what the world like if national borders were ignored and only one type of topographical feature was mapped. Airports Lakes Rivers Roads Seaports Data-driven Insights on the California Drought (12/8/2014 8:33:13 AM) A newly released interactive California Drought visualization website aims to provide the public with atlas-like, state-wide coverage of the drought and a timeline of its impacts on water resources. The U.S. Geological Survey developed the interactive website as part of the federal government's Open Water Data Initiative. The drought visualization page features high-tech graphics that illustrate the effect of drought on regional reservoir storage from 2011-2014. For the visualization, drought data are integrated through space and time with maps and plots of reservoir storage. Reservoir levels can be seen to respond to seasonal drivers in each year.

Best of the visualization web At the end of each month I pull together a collection of links to some of the most relevant, interesting or thought-provoking web content I've come across during the previous month. Here's the latest collection from January 2018. Visualisations & Infographics Includes static and interactive visualisation examples, infographics and galleries/collections of relevant imagery.

Data Visualization: Modern Approaches About The Author Vitaly Friedman loves beautiful content and doesn’t like to give in easily. When he is not writing or speaking at a conference, he’s most probably running … More about Vitaly Friedman … Data presentation can be beautiful, elegant and descriptive. There is a variety of conventional ways to visualize data - tables, histograms, pie charts and bar graphs are being used every day, in every project and on every possible occasion.

We Love Infographics Rockmap™ by Ernesto Lago behance.net Here’s Looking at Euclid by Helen Friel blushingcheekymonkey Colours Mentioned in Books by Jaz Parkinson Wired Molecular clouds show off potential, beauty of data visualization “Simulated molecular clouds are beautiful, intricate, and ever-changing — properties that make them ideal candidates for high-powered visualization,” wrote Erica Kaminski, a PhD student in the Department of Physics and Astronomy, when she submitted these winning images to the data visualization contest sponsored by the Health Sciences Center for Computational Innovation (HSCCI). The contest helped showcase the capabilities of the new VISTA Collaboratory in Carlson Library — and in this case the Center for Integrated Research Computing’s Blue Gene/Q system, called Blue Streak, which consists of 1,024 nodes,16 TB of RAM, and 400 TB of storage. A molecular cloud (or stellar nursery if star formation is occurring within it) is a type of interstellar cloud whose density and size permit the formation of molecules, most commonly molecular hydrogen — in contrast to other interstellar areas that contain predominantly ionized gas.