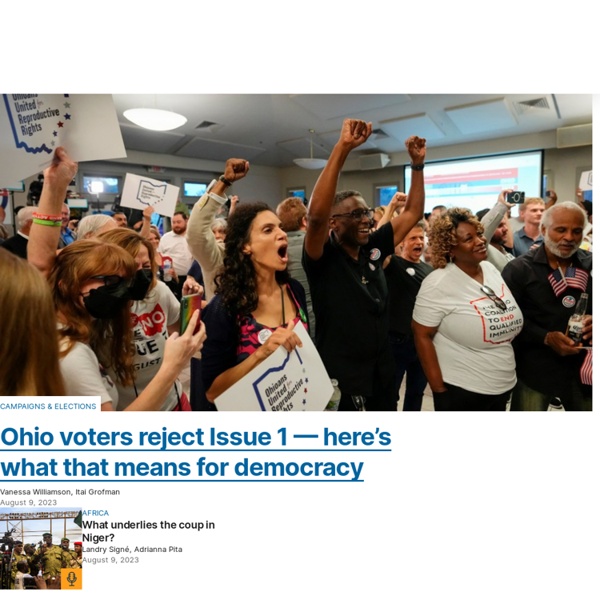 Strengthening democracy through private enterprise and market oriented reform Sparking Debate on Economic Policy in Nepal Samriddhi wins an award at the Asia Liberty Forum in Kuala Lumpur. By Sarita Sapkota, Samriddhi Free Online Courses - Open Education Database What if you could have free access to countless classes on topics from A to Z, just by connecting to the internet? OpenCourseWare makes that a reality by publishing high-quality college materials online. OpenCourseWare's free online college courses gained popularity after the Massachusetts Institute of Technology launched the program in 2002. MIT wanted to "enhance human learning worldwide by the availability of a web of knowledge." They also thought that along with providing valuable free classes online, students would be better prepared for coursework in the actual classroom.

All Stories by Zeynep Tufekci The Media Needs to Stop Inspiring Copycat Murders. Here's How. After a wave of teen suicides in the 1980s, news outlets began reporting on these deaths more cautiously. Similar guidelines could help prevent more shooting sprees. Social Media's Small, Positive Role in Human Relationships It's just one factor in modern life that can increase connection in a world divided by the vagaries of capitalism, the disengagement of television, and the isolation of suburban sprawl.

What is CIDE? Office of International Academic Affairs CIDE is one of Mexico’s most important centers of teaching and research in the social sciences. Recognized both nationally and internationally, CIDE has been a non-profit public institution since its establishment in Mexico City in 1974. Part of the network of highly specialized public centers for research and higher education coordinated by the National Council of Science and Technology (Conacyt), CIDE is fully committed to contributing to the development of Mexico through its demanding academic programs; rigorous, relevant research; and links to the public, private, social, and academic sectors. Intellectual independence and rigor, respect for plurality, a sense of equity, and a constant effort to balance a scientific approach to research with social relevance are behind CIDE’s successful search for excellence. CIDE has six academic divisions: Economics, Public Administration, International Studies, Political Studies, Legal Studies, and History.

Identifying and Regulating Systemically Important Financial Institutions: The Risks of Under and Over Identification and Regulation Certain financial institutions are so central to the American financial system that their failure could cause traumatic damage, both to financial markets and to the larger economy. These institutions are often referred to as “systemically important financial institutions” or SIFIs. Among its numerous provisions, the Dodd-Frank Act, the comprehensive reform legislation signed into law during the summer of 2010, requires financial regulators belonging to the Financial Stability Oversight Committee (FSOC) [1] to designate those financial institutions that are systemically important.[2] Such SIFIs are to be supervised more closely and potentially required to operate with greater safety margins, such as higher levels of capital, and to face further limitations on their activities. This policy brief is intended to assist the Fed and the FSOC with this difficult task. 1. 2.

The Top 100 Twitter Tools of 2012 (Categorized) This post is #9 in DailyTekk’s famous Top 100 series which explores the best startups, gadgets, apps, websites and services in a given category. Total items listed: 115. Time to compile: 8+ hours. Follow @DailyTekk on Twitter to make sure you don’t miss a week! Twitter is my social network of choice (see our recent article: Inside Twitter). Richard Gingras For more than thirty years, Richard Gingras has led highly-regarded efforts in the development of online services, software, and new media. These endeavors range from pioneering uses of satellite networking for television, the first applications of television signals for data distribution, both pre-Web and Web-based online services, and the creation of various platform technologies. Over the last several years Gingras has focused his attention on the transformation of the media landscape. Gingras is currently senior director of news and social products at Google. In that role he oversees Google News which connects more than a billion unique readers each week to articles from journalists in 72 countries and 45 languages. He also oversees areas of product development relating to Google’s social products (Google+).