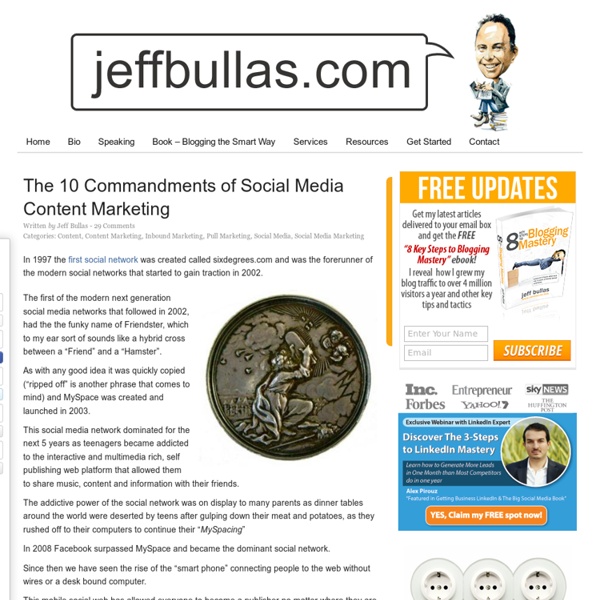 In 1997 the first social network was created called sixdegrees.com and was the forerunner of the modern social networks that started to gain traction in 2002. The first of the modern next generation social media networks that followed in 2002, had the the funky name of Friendster, which to my ear sort of sounds like a hybrid cross between a “Friend” and a “Hamster”. As with any good idea it was quickly copied (“ripped off” is another phrase that comes to mind) and MySpace was created and launched in 2003. This social media network dominated for the next 5 years as teenagers became addicted to the interactive and multimedia rich, self publishing web platform that allowed them to share music, content and information with their friends. The addictive power of the social network was on display to many parents as dinner tables around the world were deserted by teens after gulping down their meat and potatoes, as they rushed off to their computers to continue their “MySpacing” 1. 2. 3. 4. 5. 6.

All content is marketing Everything you write should be crafted with the intention of selling, educating, or increasing customer loyalty. The phrase “Content Marketing” describes marketing by attracting potential customers with content that interests them. All content should have that goal however, not just the stuff produced by the “content marketing” project. Blogging, eBooks, and webinars are universally regarded as marketing materials, but other equally important content like FAQs, Docs, Press Releases, Welcome messages, etc. sometimes fall into some other bucket of “Content That Does No Marketing™”. Bullshit. Aim High With Content When your business decides to produce content, whether it’s help documentation, or a webinar, there are different levels of quality you can shoot for. Functional: This is the zero-points solution. The vast majority of content produced by businesses out there, from start-ups to Fortune 500s, barely hits level two. Improving written content Here are 3 rules of thumb for written content…

Social Media From Scratch Coming Soon: A New Video Series from Mark W. Schaefer: Social Media Explained! ShareThis Copy and Paste ‘ISIS Hackers’ Googled Their Hit List; Troops’ Names Were Already on Public Websites Here's what he's got planned for the sci-fi phenomenon's return to television. First Twin Peaks was supposedly resurrected, and now the other greatest ‘90s supernatural thriller is making a comeback. On Tuesday, Fox announced a limited 6-episode “event” of their beloved X-Files. “The X-Files was not only a seminal show for both the studio and the network, it was a worldwide phenomenon that shaped pop culture—yet remained a true gem for the legions of fans who embraced it from the beginning. The series featured many indelible characters (Smoking Man, anyone?) The X-Files spanned 202 episodes after 9 seasons—as well as two feature films—and left the air back in 2002. You must be having an exciting day. Yeah, it just got exciting as you can imagine. So what can we expect in the six episodes? It’ll be honest to the characters, and what happened to them since the series ended and the second movie. Will you personally be overseeing the scripts? There are no scripts yet! Yes. I do, actually.

7 Lessons From Content Marketing’s Greatest Hits Gilad de Vries is vice president, brands and agencies at Outbrain. Before joining Outbrain he served as VP of Digital Media and Principal at Carmel Ventures, one of Israel's top venture capital firms. Follow him @giladdevries. Lately, it's impossible to open a newsletter, check Google alerts, or visit any news sites without reading something on the benefits of content marketing. Yes, advances in technology and the rise of social media as a marketing channel have eliminated the need for traditional modes of distribution. Luckily, there are already a handful of companies who have really nailed down the art of content marketing, and their efforts serve as great examples. 1. This may seem obvious, but if you want to be taken seriously by consumers, it’s important to make your content visually compelling. 2. This goes hand in hand with investing in design. 3. Although the ultimate purpose of all marketing is to drive sales, content marketing employs a more nuanced, indirect approach. 4. 5.

Most Valuable Global Brands Recovering Faster Than S&amp;P 500 Slightly off-topic, but likely worth a look to anyone with a vested interest in how the global economy fares (which means pretty much everyone reading this blog): Millward Brown Optimor has compared the financial performance of its list of most valuable brands – you know, the one that pegs Google to be the most valuable at a whopping $100 billion – with the S&P 500 as a whole. The analysis shows the top 100 brands, which Millward Brown refers to as the BrandZ Portfolio and includes many technology companies like Apple, Vodafone, Microsoft, Nokia, BlackBerry, Intel and others, are recovering from the recession at a faster pace than the market. As the chart above shows, the most valuable global brands have been outperforming the S&P 500 for a number of years now but show a much faster recovery from the recession than the market in recent months. The BrandZ Portfolio is now worth 28% more than the S&P 500, and it has returned to profit (+5.6%) ahead of the market.

Why Great Content Is Vital I recently read an article about how some websites are churning out content using low cost content production resources such as articles from content farms and videos from automated video production companies. So why do these companies pump out this low value content? Long tail search engine rankingsTo monetise via either via affiliate links within content orDisplay ad revenue, selling value by every thousand impressions. What are the numbers? The mass media companies with their newspapers (Text) and TV (Video) rely on subscriptions, readership and ratings to obtain their valuable cash flow. In the social media universe of Blogs, Facebook, MySpace and YouTube the rules of valuable unique content are no different. People read a blog because the content is interesting and inviting. The paradox about content is that the value is not just for the the audience but also the producer of the content. Tired in the morning … YesRed Eyes.. So what are the benefits? 208inShare

Marqueed - Simple image collaboration and markup tool. Share, annotate and discuss images. How to Succeed in Business by Bundling – and Unbundling Much of the business story of the digital age so far has been about taking products and institutions apart — unbundling them. Music CDs were unbundled into MP3s that were sold (and illicitly downloaded) individually. Newspapers have been unbundled by blogs and classified ad sites. Now, digital-education upstarts are trying to unbundle the university. What’s becoming clear as time passes, though, is that this is not a one-way process. Why is this? Andreessen and Barksdale started working together almost 20 years ago at Netscape Communications. I said, really just to end the conversation, “Gentlemen, there’s only two ways I know of to make money: bundling and unbundling.” Andreessen: It also demonstrates a huge advantage to having to leave for a plane. Barksdale: That’s right. I had worked for several businesses during my career by that time that had become conglomerates, some fairly large, and then had divested themselves of various businesses. Barksdale: Like with Pandora? HBR: Yeah.

Social Media: 9 Questions To Ask Your Customers When Creating Content In a recent blog post titled “Social Media and the 3 New Pillars of Marketing?” I mentioned that content is one of the key pillars that can position your company as a “thought leader” in your market segment and help you provide solutions to your customers problems. So now we need to start looking more closely at what are the important facets of creating, re-purposing, promoting and delivering content online. So what are the three key components for content in a social media world? Creating ContentRe-Purposing existing offline content for onlinePromoting and Delivering the content Today I would like to have a look at the first key strategy “Creating Content”. Firstly you need to define who your your audience is as shown in the diagram in a guest post on Mashable below courtesy of Lee Odden of Top Rank Blog or as David Meerman Scott brands them in his Book “The New Rules of Marketing and PR”…. Who are you selling to? To find this out you need to do things like 530inShare