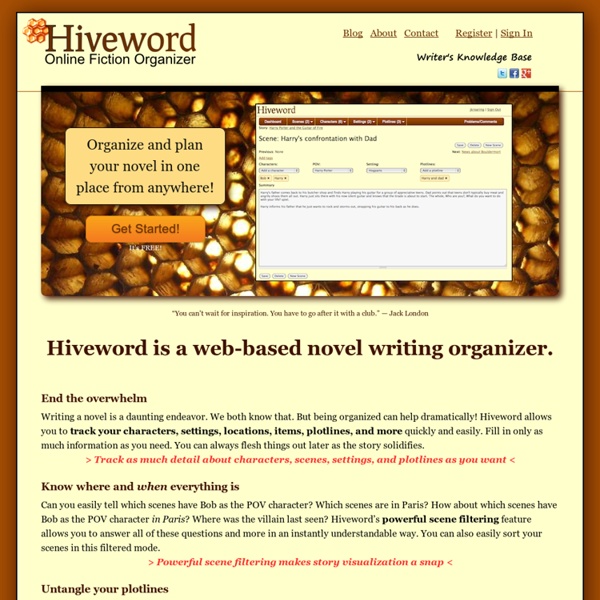 Write or Die by Dr Wicked | Putting the 'Prod' in Productivity About | Designing Change I’m a design thinker who believes we can change ourselves, our organizations, our communities, our governments, and the world by design. I work at OpenText as Director of Customer Experience. My current focus is on defining what it means to deliver holistic, intelligent experiences throughout the customer lifecycle. Experiences that change minds and spark action. I’ve been immersed in the world of enterprise software for over 20 years. I grew up on the Canadian prairies, studying political science and communications at the University of Alberta, graduating with B.A. in Canadian Studies in 1986. I currently live in Kingston, Ontario, although I’m still a westerner at heart. “My job was to be loyally subversive.”

Using Mind Maps For Creating Novels | No Wasted Ink Take a word. Place that word in the center of a sheet of paper and circle it. Let the word tease your brain. When I’m first beginning a novel’s outline, I like to use mind maps to help generate characters and plot points. Overall Plot Mind Map Start with a central Node, the title of your book. Next I generate mind maps for each of the points that I come up with in the hubs. Character Generation Mind Map Write the name of your character in the center of a sheet of paper. Plot Generation Mind Map Think of an moment in time that will happen in your novel. I am a paper person and write my mind maps in a composition notebook with my fountain pens. I have included a review of five of the the mind mapping software programs below. Freemind This was the first mind map program that I used when I started creating the maps. Xmind I love the visual maps that this program creates. MindMeister This mind map software is probably the most minimalist in the list, but sometimes being simple is an asset. Prezi

Spacejock Software 15 free tools for better online storytelling | News Designs Whoever said “practice makes perfect” was a liar. Human beings have been practicing storytelling for over 35,000 years (that we know of), and there is still plenty of room for improvement. For all intents and purposes, storytelling is the art of making people interested in what you have to say. If you can get them to remember what you’ve said … bonus points. Early storytellers quickly learned that a tale could be far more riveting (and as result, more enduring) if it captured one’s imagination and invoked thought. Every time the skies open up and a new technology arrives on the scene, we take a stab at reinventing one of the oldest traditions known to man. Just like the early storytellers of our past, we have stumbled onto a new way of capturing imagination and invoking thought. The invention of the internet, and the tidal flow of information that followed, has equipped us with a way to tell stories that Neanderthals would have drooled over. Here’s my collection so far:

Steven Hall: My desktop The calmer and more well-ordered my desktop is, the more I can convince myself I'm on top of things. When I feel like I'm on top of things (even if I'm not) it's much easier to work. My big problem is that I can never predict how long a piece of work is going to take, so I just have to keep going and keep going until – sooner or later – it's done. I took this photo on holiday last year. I almost always work straight onto the computer. "Winter early edited 3" is part of my new novel. The photo of the tattoo isn't mine, it's a Ludovician shark tattoo that someone posted on Twitter. When I first moved to London, I went into a hairdresser and asked for a haircut like Don Draper's. Twitter is incredibly useful.

Free Action Verb list for Writers Early in my writing career, I discovered that using action verbs adds to the color and passion of nearly any type of writing (from novels to screenplays to resumes). For some unknown reason, new writers almost reflexisively tend toward verbs of being. These verbs are inert and slow down description. Johnny is in bed. That tells the reader the basics of Johnny's situation, but Johnny is essentially static. Johnny collapses into the bed. Isn't the second sentence much more compelling? Here I have posted the my list as a Microsoft Word document and Adobe Acrobat PDF file. Action Verb List in Microsoft Word format (.doc, 76K) Action Verb List in Adobe Acrobat PDF format (.pdf, 46K) PS: I collected all of this information and more in a handy poster for easy reference.

WriteWords - Writing Community - jobs, directory, forums, articles for writers - StumbleUpon Automated argument assistance As part of the ITeR project I have been working in, I have developed several experimental systems for automated argument-assistance. Argument-assistance systems are aids to draft and generate arguments, e.g., by administering and supervising the argument process, keeping track of the issues that are raised and the assumptions that are made, keeping track of the reasons adduced, the conclusions drawn, and the counterarguments that have been adduced, evaluating the justification status of the statements made, and checking whether the users of the system obey the pertaining rules of argument. Argument-assistance systems should be distinguished from the more common automated reasoning systems. The latter automatically perform reasoning on the basis of the information in their 'knowledge base'. In this way, an automated reasoning system can do (often complex) reasoning tasks for the user. Currently the following experimental systems can be downloaded: Argue!