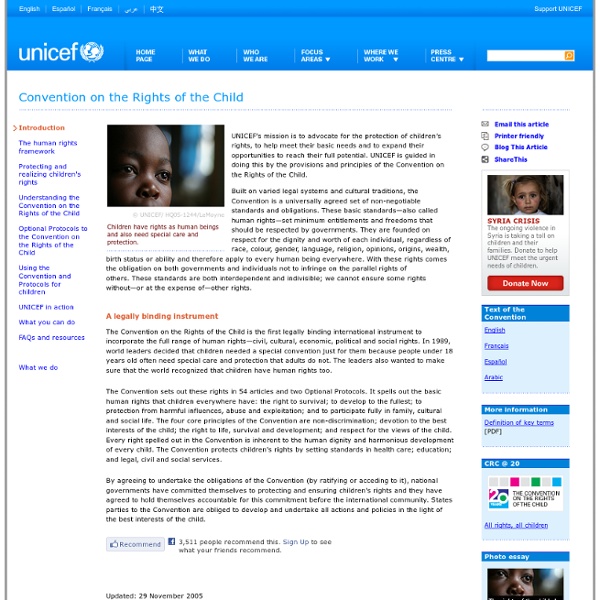 kidscape "What's Up, Croc?" Children and young people are often denied their rights. Sometimes we don't know what our rights are and what to do if they are violated. This website is about the Convention on the Rights of the Child (CROC). CROC is a United Nations (UN) declaration that Australia signed up to in December 1990. It represents a set of rights that nearly every government in the world has agreed that all children are entitled to. If you are a child or young person we want to know what you think. If you work with children in the youth sector this website has something for you as well. Non Government Organisations who work with children and young people in Australia currently have the opportunity to contribute to the NGO report to the UN on whether Australia is meeting its obligations under CROC. For more information, visit our website www.childrights.org.au or you can have a look at our Consultation Paper and accompanying Background Briefing.

IUC Journal of Social Work Theory and Practice The Tension Between Protection and Participation – General Theory and Consequences as Related to Rights of Children, Including Working Children Jim Lurie Barnevernets Utviklingssenter i Midt-Norge Dubrovnik, 9.6.03 I. The United Nations Convention on the Rights of the Child was adopted by the General Assembly in November 1989, and has been ratified by most countries, including Norway in 1991. The Convention consists of 54 articles, including 40 substantive articles giving children specific rights. The rights defined in the Convention have been categorized in various ways in order to facilitate understanding of the document and/or to highlight the importance of certain types of rights at the expense of others. Following its adoption in 1989, UNICEF chose to promote the Convention using four categoriessurvival, development, protection and participation. Cantwell prefers the categorization, commonly referred to as the “3 Ps” which are: The right to provision of basic needs. II. III. IV. V.

Action for Sick Children     Rights of the Child Posters | About Children's Week | Children's Week WA Children's Week is a time to promote awareness of Children’s Rights as proclaimed in 1954 by the United Nations, and a suite of posters has been developed to celebrate our children. In 2012 Meerilinga were excited to partner with WA artist Kerry Anne Jordinson, to develop the third poster in the series, entitled 'A Child's Right to Speak'. Kerry Anne will again provide artwork for the next poster in the series 'A Child's Right to be Safe'. The new poster will be launched on Wednesday 23rd October 2013, Universal Children's Day at the Children's Week Award Ceremony. To buy one or all of these beautiful laminated A3 posters please visit our shop. For further information contact us via email info@childrensweekwa.org.au or phone 08 9489 4022 or Regional freecall 1800 200 702. Singapore born, UK raised, and now living in Australia, Kerry Anne Jordinson is a self taught artist working successfully across a broad range of media.

Pre‐school Learning Alliance Child Rights - Welcome WellChild Child Labour Despite the fact that many people believe that slavery no longer exists, the International Labour Organization (ILO) estimated that there are some 8.4 million children in slavery or practices similar to slavery (ILO,2002). Although the ILO acknowledged that the data on which these estimates were based was “partial and incomplete”. They are all in child slavery, as defined by the 1956 UN Supplementary Slavery Convention. In these cases, as well as being in a hazardous situation, there is an intention to exploit these children for someone else’s gain. Children who are used by others who profit from them, often through violence, abuse and threats, in prostitution or pornography , illicit activities, such as forced begging, petty theft, and the drug trade; Forced child labour, for example in agriculture, factories, construction, brick kilns, mines, bars, restaurants or tourists environment Children who are forced to take part in armed conflict. CHILD WORK, CHILD LABOUR, child slavery?