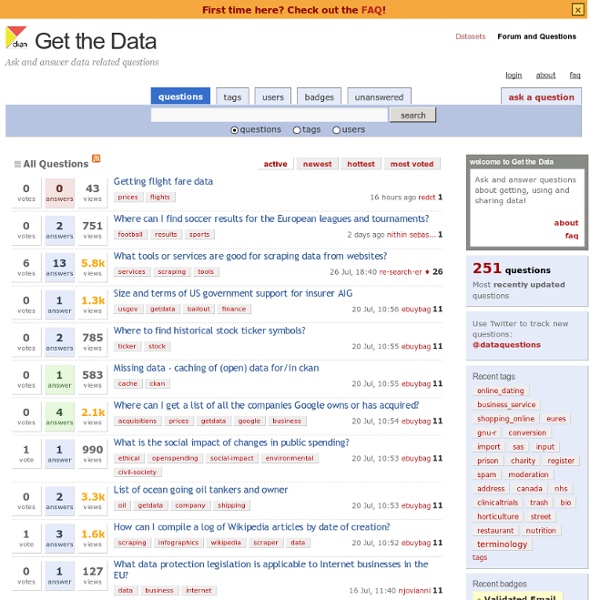 The 70 Online Databases that Define Our Planet Back in April, we looked at an ambitious European plan to simulate the entire planet. The idea is to exploit the huge amounts of data generated by financial markets, health records, social media and climate monitoring to model the planet’s climate, societies and economy. The vision is that a system like this can help to understand and predict crises before they occur so that governments can take appropriate measures in advance. There are numerous challenges here. Nobody yet has the computing power necessary for such a task, neither are there models that will can accurately model even much smaller systems. Today, we get a grand tour of this challenge from Dirk Helbing and Stefano Balietti at the Swiss Federal Institute of Technology in Zurich. It turns out that there are already numerous sources of data that could provide the necessary fuel to power Helbing’s Earth Simulator. WikipediaWikipedia is the most famous cooperatively edited encyclopedia. Where’s George?

Gapminder: Unveiling the beauty of statistics for a fact based world view. - Gapminder.org FlowingData | Data Visualization, Infographics, and Statistics The Palestine Papers Coding for Journalists 101 : A four-part series | Dan Nguyen pronounced fast is danwin Photo by Nico Cavallotto on Flickr Update, January 2012: Everything…yes, everything, is superseded by my free online book, The Bastards Book of Ruby, which is a much more complete walkthrough of basic programming principles with far more practical and up-to-date examples and projects than what you’ll find here. I’m only keeping this old walkthrough up as a historical reference. I’m sure the code is so ugly that I’m not going to even try re-reading it. So check it out: The Bastards Book of Ruby -Dan Update, Dec. 30, 2010: I published a series of data collection and cleaning guides for ProPublica, to describe what I did for our Dollars for Docs project. So a little while ago, I set out to write some tutorials that would guide the non-coding-but-computer-savvy journalist through enough programming fundamentals so that he/she could write a web scraper to collect data from public websites. DISCLAIMER: The code, data files, and results are meant for reference and example only.

Influence Explorer Data News | Actu data & Journalisme de Données All of our data journalism in one spreadsheet | News Data journalism and visualisation from the Guardian Illustration: Lisa Villani for the Guardian Today we have a list of all the data journalism produced here on the Guardian datablog. You can see what's been popular and get easy access to the data we have curated as this list shows each datablog post's associated spreadsheets, authors, the number of comments and retweets. By sorting the blog posts by the number of retweets, we can see that Iraq War Logs formed the base of our most retweeted post, followed by a recent post from David McCandless on fish stocks. Sorting by comments shows that the Fukushima nuclear power plant updates were the subject of the greatest discussion, closely followed by Every Doctor Who villain since 1963. The list shows that in two years we have covered a huge range of data sets. The British government have been publishing more detailed spending data than any of their predecessors, and this has not escaped our attention. Here's all the data. Data summary More data